The goal of this project was to assess the feasibility of a novel device to measure cardiac force on a chip. The Platform for Electromechanical Analysis of Cardiac Contraction On Chip is a biological microelectromechanical system consisting of a micro-strain gauge embedded in flexible polymer cantilever beams. Cell contraction causes the bending of cantilever "slips" that can be electrically recorded by the strain gauge. We combined novel direct ink writing techniques with conventional microfabrication to construct device prototypes and tested their biocompatibility with different human cardiomyocytes (i.e., cardiac muscle cells). Experimental results confirmed the proposed working mechanism and the feasibility of using the device to measure tissue force.

Organ-on-chip devices allow complicated and interacting effects of genotype, disease state, and drug intervention on organ function to be evaluated with high throughput. For a heart-on-chip device, it is essential to measure contraction force, which is an important index of cardiac functions. However, existing heart-on-chip devices are mostly based on video recordings and off-line analysis to measure contraction, which are critical limitations. To quantitatively measure contraction force electrically to assist high-content, high-throughput applications, we proposed a new device concept known as a Platform for Electromechanical Analysis of Cardiac Contraction On Chip (PEACOCK). The PEACOCK is a biological microelectromechanical system (bioMEMS) consisting of a radial micro-strain gauge embedded in flexible polymer cantilever beam arrays. Cell contraction causes bending of the polymer "slips" that can be electrically recorded by the strain gauge in real time. The mechanism of measurement is a series of signal transductions from force to strain, then to electrical signals. Our goal was to (1) fabricate PEACOCK device prototypes, and (2) test the feasibility of using a PEACOCK to measure the force of cardiac contraction. We tested several methods of fabricating the device and identified direct ink writing (DIW) as the best approach. Our experimental results showed that it is feasible for PEACOCK to measure tissue-contraction force.

We defined three main technical tasks for this project: (1) device fabrication and characterization; (2) anisotropic surface patterning to guide aligned cell growth on the cantilever; and (3) determination of the biocompatibility of the device for culturing human cardiomyocytes. 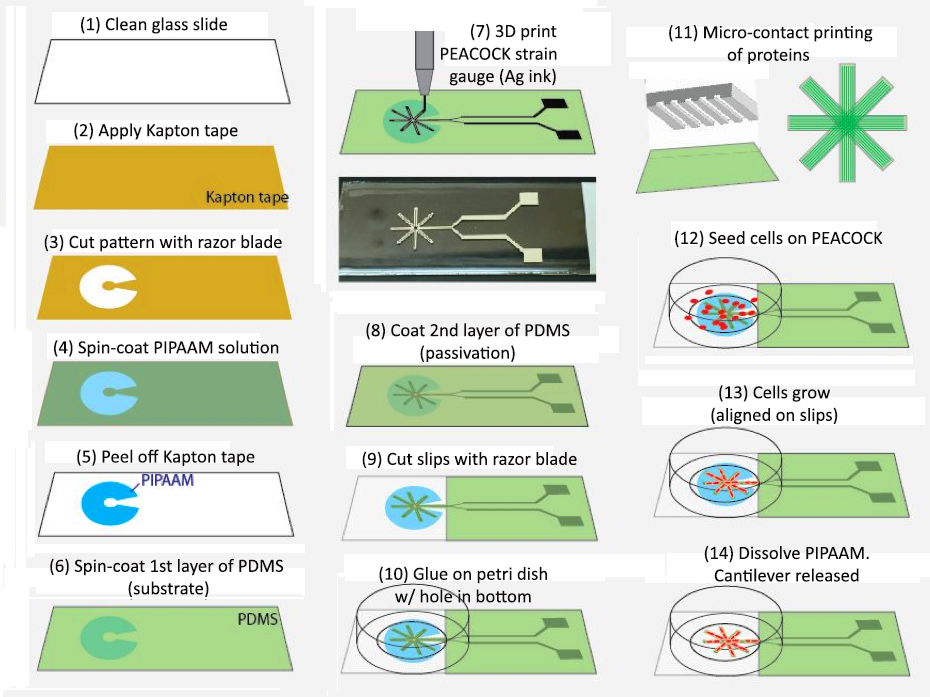 Using silver inks, we were able to print flexible micro-strain gauges on thin polydimethylsiloxane (PDMS) film-based cantilever slips, and passivated the strain gauge (i.e., treated a metal surface to prevent it from dissolving) with another top layer of PDMS. The electrical and electromechanical properties of the device prototype was tested, demonstrating that the PEACOCK displayed consistent electrical resistance, and that its resistance changed sensitively with bending of the slips (Figure 2). Therefore, the proposed mechanism was confirmed to be valid by experimental results.

Figure 2. PEACOCK exhibited changes in electrical resistance (i.e., drops in current, labeled Bend) in accordance with bending (A and B) of its polymer cantilever slips.

We employed microfabricated PDMS stamps for micro-contact printing of fibronectin onto the slips. The method resulted in alternating hydrophobic and hydrophilic micro-line patterns that supported anisotropic tissue growth. We used hydrophilic polystyrene nanobeads as an indicator to confirm that the cantilever surface was effectively patterned. Subsequent tissue growth on such patterned PDMS demonstrated that patches of cells grew with higher aspect ratio shapes than non-patterned PDMS (Figure 3).

Our determination of the feasibility of microscale fabrication of a PEACOCK device for measuring cardiac force supports Lawrence Livermore National Laboratory's biosecurity mission while leveraging its core competencies in bioscience and bioengineering. Additionally, the new advanced materials capabilities developed during this project­ will enhance the Laboratory's standing at the forefront of the field. Our research provides the necessary groundwork for combining additive manufacturing techniques with microfabrication to generate biomechanical devices for tissue culture, measurement, and characterization. In the future, these new capabilities can be used in more broadly defined “human-on-a-chip” projects at the Laboratory.

During this project, we experimentally tested the feasibility of using PEACOCK devices to measure cardiac tissue force. To do this, we identified, separately addressed, and assessed how successful we were in accomplishing the three technical tasks before us. For device fabrication and characterization, we determined that DIW on thin polymer cantilevers was the best technical approach. For optimal anisotropic surface patterning to guide cell growth, we determined that patterned PDMS stamps applied to the PEACOCK’s slips resulted in patches of cell growth with the desired high-aspect-ratio shapes. For biocompatibility, we determined that commercially available cardiomyocytes adhered well to the PDMS surfaces and were capable of rapidly forming viable tissue patches.

The experimental results showed that the PEACOCK is a device that is sensitive enough to electrically record cardiac contraction with potentially greater accuracy and more fidelity to the three-dimensional structure of heart tissues than current organ-on-chip devices. Our device represents a new class of force-sensing platforms with novel functionality suited specifically to the heart-on-chip technology. This new tool will enable robust and simultaneous electrical and mechanical measurements to be obtained with high throughput. This technology could open the door to novel treatment and prevention strategies for people struggling with cardiovascular disease, as well as those predisposed to it.