Magnetic fusion energy devices must be designed to control the interaction between the hot fusing plasma and surrounding solid- or liquid-wall materials. Exhausting plasma sputters undesirable wall material back into the confinement region, and for high-power operation, solid walls may reach melting limits, severely limiting or prohibiting operation. Predicting the behavior of such systems, especially when multiple wall materials are present, is a very challenging scientific problem. We plan to combine the expertise of Livermore's materials modeling with edge-plasma modeling and experimental diagnostics to enable validated simulation plasma and material interaction models of plasma-induced changes to tungsten and beryllium materials in magnetic fusion energy devices. A set of specific issues will be addressed for tungsten and tungsten–beryllium materials—such as will be used in the ITER international fusion research reactor in the south of France—including sputtering, impurity transport in plasmas, and material surface evolution. We are combining upgrades to existing plasma and material codes and validation with experimental data.

We expect to develop and apply physics-based models of turbulent and collisional impurity transport through the edge plasma to the core and compare the results with experimental data. We are assessing the role of tungsten dust particles and mobilization of observed tungsten tendrils in contributing to the inward flux of impurities, compute the rate of material mixing of different materials at various locations in a tokamak magnetic fusion reactor, and the properties of this new mixed material. All these issues are central to guiding the operation of high-power tokamaks such as ITER, as well as designing new devices. The extended computational tools developed and physics insight gained will enable us to effectively address new issues that will likely arise, such as use of new materials.

Magnetic fusion energy faces the challenge of interfacing fusion plasmas with surrounding materials. Our research addresses this issue as well as contributing directly to the Laboratory's core competencies in high-energy-density science and advanced materials and manufacturing. In addition, our project supports LLNL's initiative to support both national and international collaborations in magnetic fusion science.

In FY15 we (1) completed laser blow-off components for the NSTX-U (National Spherical Torus Experiment Upgrade) magnetic fusion device at the Princeton Plasma Physics Laboratory—final installation was delayed to FY16 because of changes in the initial operation schedule for the reactor, (2) implemented impurity emission diagnostics in the UEDGE edge-plasma transport and BOUT++ turbulence codes to mimic NSTX-U diagnostics, (3) performed three-dimensional edge-plasma simulations of NSTX-U with BOUT++, (4) created parameters for a two-dimensional impurity ion-transport model based on three-dimensional BOUT++ simulations, (5) developed a model of tendril (fuzz) formation on tungsten surfaces in fusion plasmas, and (6) collaborated on tungsten dust simulations for ITER and on creating parallel UEDGE and DUSTT (used to model dust transport) simulation codes. 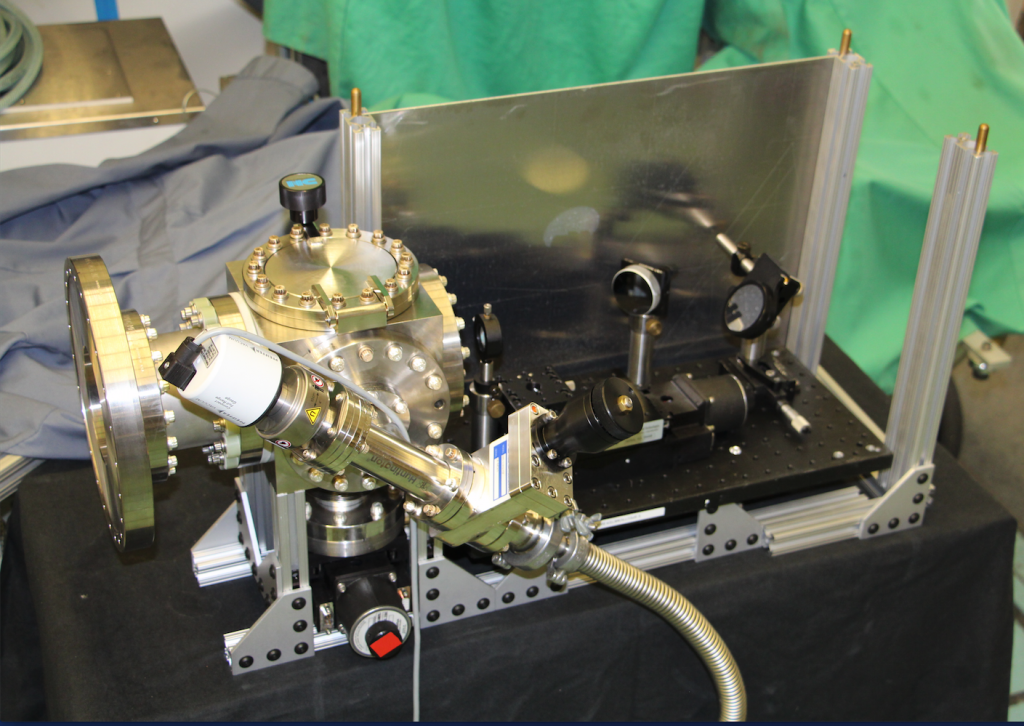 Target chamber constructed for the laser blow-off system to be connected to the NSTX-U magnetic fusion device at Princeton Plasma Physics Laboratory via the flange on the left. This chamber will allowed controlled amounts of tungsten to be injected into NSTX-U to simulate the release of tungsten by sputtering. Spectroscopy measurements will follow the evolution of tungsten through the edge-plasma region, which will be compared to impurity ion-transport modeling developed in this project.