Transport and the Equation of State for Asymmetric Plasma Mixtures

We plan to develop a new capability to calculate thermodynamic and transport properties of asymmetric plasma mixtures—that is, plasmas with two or more components differing significantly in charge and mass in the presence of strong gradients. Inertial Confinement Fusion with ablator materials mixing into the deuterium—tritium plasma is such an example. The molecular dynamics plasma simulation code ddcMD developed in the Cimarron project (which was dedicated to the prediction and measurement of properties of dense, highly collisional, and strongly coupled plasmas) will form the basis of this capability. Specifically, we will deliver a high-fidelity description of plasmas, including cases where there is strong ion–ion coupling for at least one component. We will develop new molecular dynamics techniques for transport calculations including accurate equations of state of asymmetric plasma mixtures, even in the presence of strong gradients such as sharp interfaces. Our initial simulations will focus on an interface at rest, and then proceed to simulations of an accelerated interface including diffusion brought about by pressure gradients and the Rayleigh–Taylor hydrodynamic instability.

Upon successful completion of this project, we will develop the capability to conduct plasma simulations with strong gradients, including those in the strongly coupled regime. We expect to develop simulations of diffusion in asymmetric plasmas with strong gradients by properly treating the plasma equation of state (not making an ideal gas approximation) as well as the screening and electric fields associated with variations in electron density. We will have calculated the reflecting power of the interface relevant to questions about Knudsen molecular diffusion effects, and have demonstrated the performance of the code in massively parallel simulations on Livermore supercomputers.

The new capability will address LLNL's strategic need to predict transport processes in plasma and warm dense matter systems that are heterogeneous, such as at an interface. The new capability will be most relevant to the Laboratory's strategic focus area in stockpile stewardship science, in which new approaches are sought to model plasmas to better understand boost physics in weapons. In addition, this project supports core competencies in high-performance computing, simulation, and data science as well as high-energy-density science. The project also has applications to DOE Office of Science strategy, which specifically identifies nonequilibrium plasma properties as a priority research area.

In FY15 we (1) implemented and tested, in ddcMD, the capability for large-scale (million-ion) molecular dynamics simulation of screened Coulomb plasmas in which the electron density (and hence the screening) varies in space, and included the electron pressure; (2) conducted simulations of diffusion at a constant pressure interface between the deuterium–tritium plasma and a plastic ablator, as found in conditions for Inertial Confinement Fusion; (3) improved the equation-of-state fidelity in ddcMD; and (4) began to develop a unique fast multipole capability for systems with spatially varying screening. 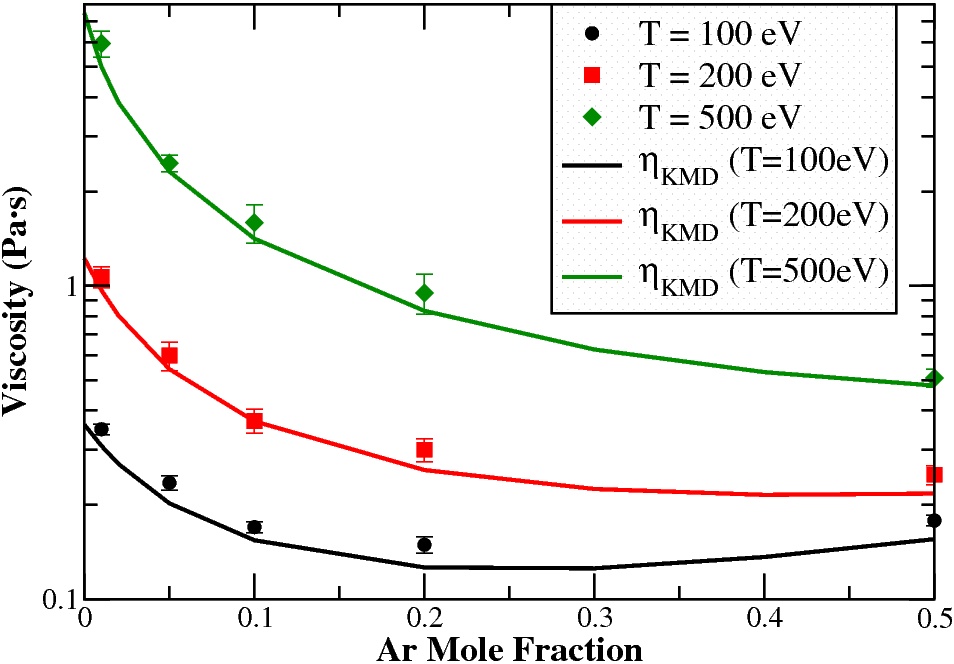