Potable water is a crucial national resource, necessary for basic sanitation and irrigation of crops, as well as for cooling in energy production and in many industrial processes. The ability to reduce the salt content in water allows us to reduce both withdrawal and consumption of potable water, and can provide additional sources of water, increasing the resilience of our supplies. We propose to improve the efficiency of brackish water desalination by extending the salinity range of flow-through electrode capacitive desalination, an LLNL technique with the potential to reduce brackish water desalination energy cost by a factor of 5 to 10. In capacitive desalination, salt is removed from water by charging a pair of porous electrodes immersed in water and adsorbing the ions to the charged surfaces, similar to how energy is stored in a super-capacitor. In this method, energy use scales with the amount of salt removed, and thus represents an interesting alternative for desalinating lower-salinity feed water. Currently, this technique can treat concentrations up to 5 g/L, but brackish concentrations range from 1 to 20 g/L and can show great variance. Our goal with this project is to increase the amount of salt that can be removed in a single pass by segmenting the electrodes into multiple pairs and phasing the charging of segments, as well as timing the charging to coincide with water flow through the cell. This will enable us to selectively and locally desalinate the same volume of water several times.

The scientific challenge of the project relies on gaining a better understanding of the transport processes in the water treatment cell—electrical current has to be matched to the influx of ions to perform desalination. The regeneration process should focus released ions into the smallest volume possible to minimize brine. Dispersion and diffusion have to be accounted for to maintain the large concentration gradients between desalted and brine portions. Finally, alignment of the electric field with the flow direction of water in the flow configuration will affect ion motion. We expect to develop the first two-dimensional model for the flow-through electrode capacitive desalination process and provide experimental test data for salinities ranging from brackish to seawater. These data will establish the technique as the most effective desalination method for brackish water and hopefully show competitive results for seawater. Flow-through electrode capacitive desalination is poised to become the most energy- and cost-efficient brackish water method, and extending the range of treatable salinities up to seawater will help establish it as superior water treatment method for brackish water.

A recent DOE report on The Water-Energy Nexus: Challenges and Opportunities shows that water resources and their interconnectivity to energy production is attracting attention at the highest levels at DOE, especially when severe drought limits water availability and constrains the operation of power plants and other energy-production activities. Water treatment and desalination serve as a foundation for this effort, and our research is therefore relevant to the Laboratory's strategic focus area in energy and climate security.

In FY15, after a midyear start, we (1) created a two-dimensional electrode model with integrated flow to study phased charging in conjunction with varying water flow and electrode-charging rates; (2) determined that the model captures basic functionality of the system and can simulate any number of electrode pairs, but does not yet cover multiple ionic species, chemical reactions, and the effects of pH; and (3) developed an experimental testing setup that can perform phased charging of up to 10 electrode pairs and assembled a LabVIEW system-design software program that can control charge and flow timing. Our testing setup will be used to validate model predictions and determine the need for further refinement of the model. 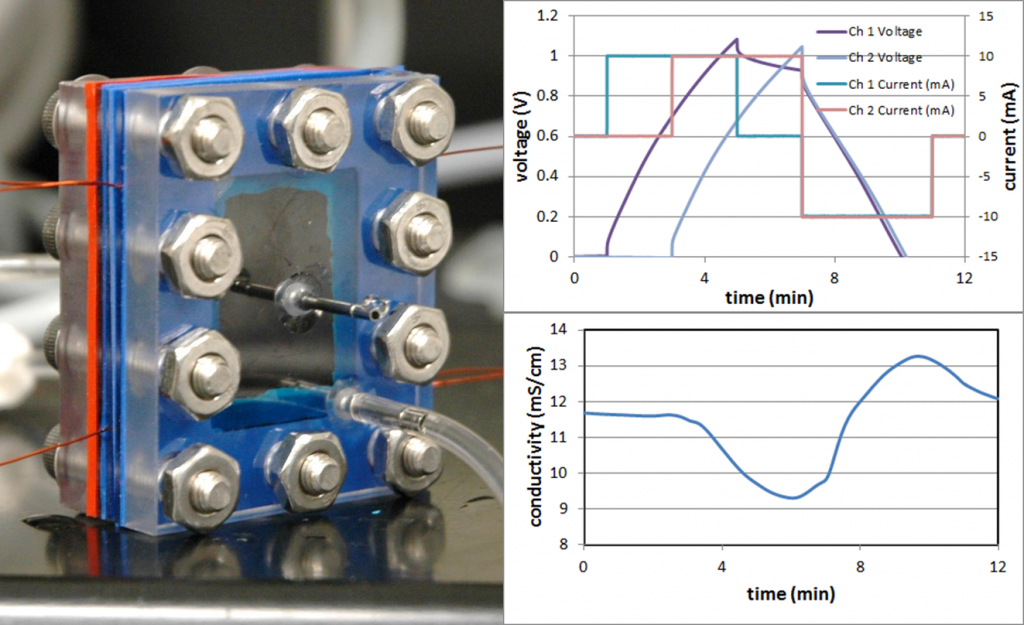 A capacitive deionization cell with three electrode pairs (left) for research into improving the efficiency of brackish water desalination by extending the salinity range of Livermore's flow-through electrode capacitive desalination technology. The charge operation (top) and output concentration (bottom) for a two-pair setup is shown on the right. Charging the electrodes with a time delay makes the outlet concentration more square shaped, which increases efficiency.