This research project, conducted at Lawrence Livermore National Laboratory, describes the significant steps taken to improve understanding of laser–plasma interaction and modeling capability. Laser–plasma interaction (LPI), a challenging topic in basic science and is of ongoing relevance to many long-pulse laser experiments, such as those conducted at the National Ignition Facility. Results from this research are of interest to the wider physics community and have been presented in peer-reviewed journals and at high-attendance conferences. Plasma-simulation code improvements have been made to two Livermore-based codes, extending their regimes of physical applicability. The improved understanding and simulation capability for LPI afforded by this research will prove of lasting and significant benefit to the Laboratory.

The scattering of laser light by plasma waves, also known as laser–plasma interaction (LPI), is of central importance in a vast array of fundamental physics experiments and in the field of laser-driven Inertial Confinement Fusion. By diverting and reflecting laser light, LPI poses a serious threat to optical hardware and greatly reduces the laser energy coupled to the target during current long-pulse, high-power experiments. An adequate description of the propagation of intense, coherent laser light through hot, high-density plasma is fundamental to current and future LPI experimentation. Numerical simulation is an essential component of the effort to understand, predict, and mitigate LPI, and ultimately to increase the total laser energy delivered to a target.

Understanding LPI requires the modeling of processes occurring over a broad range of scales. This research used various tools appropriate for different scales, whether fine-scale, high-computational-cost kinetic codes, or coarser-scale codes that treat the plasma as a fluid. A key research objective of this project was to study nonlinear phenomena of plasma waves relevant to LPI in basic long-laser-pulse physics experiments and Inertial Confinement Fusion experiments. Pursuant to this objective, an array of fundamental plasma-wave research advances was made. Key results were published in peer-reviewed journals and presented at multiple conferences. The kinetic code LOKI was enhanced to enable the description of new physical problems relevant to this project and beyond, including particle collisions and improvements to calculation order that have greatly increased the versatility and utility of LOKI code. These improvements will be of lasting benefit to plasma research at the Laboratory.

To study the impact of these nonlinear processes on LPI and ascertain their impact at experimentally-relevant scales, reduced (simplified) models of the nonlinear phenomena were constructed. The fluid-like LPI simulation code pF3D, the leading experimental scale (100-ps duration, multi-mm cubed volumes), was augmented with new nonlinear models using results obtained from fine-scale kinetic simulations. Recent results were presented at a conference, as described later. The full impact of these nonlinear processes will require further simulations and some limited additional development.

The approach employed in this research involves a number of existing and accordingly adapted/developed computational codes that operate in different regimes and under different physical assumptions to (1) span the range of physical conditions present, and (2) remain computationally feasible. In addition to these codes, analytic theory was used where possible to provide the information required to understand and model the physical problems of interest.

A plasma is composed of electrons and partially or totally ionized atoms (ions). Direct simulation where each constituent of the plasma is evolved would require following approximately 1019-1022 particles per cubic centimeter for the problems of interest to this research project. This is not computationally feasible. One approach to describing such systems is to represent the distribution of particles (electrons or ions) as a continuum. This allows the interaction between waves in the plasma and its constituent particles (broadly known as kinetic effects) to be described. Evolving a continuum description of the particle distributions without strong external fields typically requires solving the Vlasov equation, or Vlasov–Fokker–Planck equation when particle collisions are also included. To evolve the electrostatic or magnetic fields that arise from the separation of charged particles, Poisson’s (or Maxwell’s equations, if required) must also be solved. The codes Sapristi and LOKI function in this manner. Sapristi is a convenient 1D1V code (with one spatial dimension, one velocity dimension) that uses well-established numerical techniques, while LOKI is a cutting-edge 2D2V code using advanced and novel numerical techniques and describing particle collisions.

The advantage of these so-called Vlasov codes is that no spurious numerical noise is introduced into the system, beyond the numerical precision of the machine on which the computation is performed. This allows for precise measurements of physical phenomena, such as wave-instability growth rates and nonlinear dampings of waves. To understand and describe the rich and highly nonlinear evolution of laser–plasma instabilities and the plasma waves that participate in these processes, many numerical studies of plasma waves were performed as part of this project.

The stimulated Brillouin scattering (SBS) of laser light was studied using the Sapristi code. During Brillouin scattering, ion acoustic waves in the plasma are driven. These ion acoustic waves may reach sufficient amplitudes where nonlinear processes take place, including the suppression of their damping, nonlinear frequency shifts due to both fluid and kinetic effects, harmonic generation, and wave decay. If the ion acoustic wave driven during SBS decays, the instability may become saturated, causing it to switch off until the system recovers via advection of waves out of the system, flow of materials, or collisional thermalization. A study of the interplay between SBS and ion wave decay was published in Physics of Plasmas (Chapman et al. 2015). Using the code Sapristi, this work demonstrated the total collapse of the ion acoustic wave that participates in SBS (see Figure 1). Plasma parameters at extremes of ratios of the ion sound speed to the ion thermal temperature were studied. Ion-acoustic-wave decay was found to be an effective source of SBS saturation, with a linear decay-mode growth rate that conformed to a previous study by the same authors in the absence of a laser (Chapman et al. 2014). Significant particle heating was observed under some conditions, as illustrated in Figure 1. 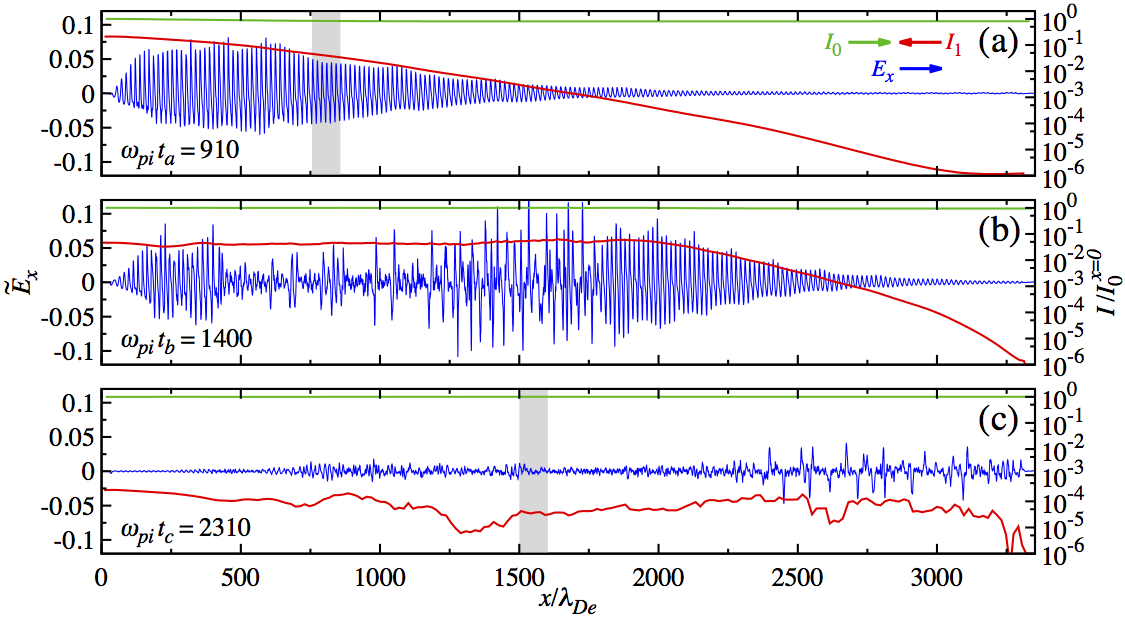 The LOKI code was used to study ion acoustic wave decay in two spatial dimensions. While some previous research had studied this phenomenon using a particle-in-cell code, the electron model used was not kinetic and significant physics was therefore missing. For the first time, fully kinetic linear-decay-mode growth rates and scalings with the wave amplitude were obtained for ion acoustic waves. This study necessitated significant computational resources, requiring a Grand Challenge allocation of computational time on the Laboratory's Quartz machine. The novelty, generality, and difficulty of this research is suggested by its publication in Physical Review Letters (Chapman et al. 2017). Our results exhibited qualitatively different behavior from any previous study and explored the competition between two distinct decay mechanisms (one purely longitudinal and the other off-axis).

Similarly, during stimulated Raman scattering of laser light, large-amplitude plasma waves may be driven. These waves, known as electron plasma waves (EPWs) or Langmuir waves, oscillate faster than ion acoustic waves. The LOKI code was used to study the linear-decay-mode growth rates of these waves under a broad range of conditions, and results were published in Physics of Plasmas (see Figure 2) (Berger et al. 2015). No comparable study had ever been completed of the transverse decay of EPWs.

The physics of particle collisions is of both linear and nonlinear significance to plasma waves. These collisions may involve electron–electron, electron–ion, or ion–ion interactions. Linearly, collisions may directly damp plasma waves. Since the particle-collisions rate is highly velocity dependent and dimensionally dependent, analytic calculations of collision rates are difficult. Nonlinearly, collisions may also play a potentially much greater role. Particle trapping leads to a reduction in Landau damping and is an important effect in kinetic simulations. Collisions work in opposition to this process, deflecting particles out of their trapped orbits and on average increasing the damping back towards the linear Landau damping rate. The modeling of particle collisions was greatly advanced in the LOKI code. The so-called back-reaction term was introduced, as well as collisions between ion species. Additionally, many algorithmic refinements were introduced to improve code performance.

A study of the impact of collisions on the linear and nonlinear damping rate of electron plasma waves was published in Physics of Plasmas (Banks et al. 2016). Further and refined results were published in Physical Review E (Banks et al. 2017). These studies revealed an important result: only for weak collision rates in low-Z plasmas for which the electron self-collision rate is comparable to the electron-ion collision rate is the damping rate given by the commonly accepted value (see Figure 3). This finding corrects the result presented in textbooks at least as early as 1973. The complete linear theory requires the inclusion of both electron–ion pitch-angle and electron–electron scattering, which itself contains contributions to both pitch-angle scattering and thermalization.

Figure 3. Left: The temporal evolution of the electrostatic field (Ex) of an electron plasma wave without (blue) and with (red) collisions. Time (t) and the collision rate (νei,th) are normalized to the electron plasma frequency (ωpe). Center: The spatially-averaged electron distribution function in the absence of collisions. Right: The spatially-averaged electron distribution in the presence of significant conditions. Longitudinal and transverse velocities (Vx and Vy) are normalized to the electron thermal velocity (Vte). Simulations were conducted using the LOKI code (Banks et al. 2016).

Reduced models of various nonlinear phenomena suitable for inclusion in a fluid-like LPI code were developed. These models include reduced (simplified) descriptions of harmonic generation (including kinetic effects), nonlinear frequency shifts, nonlinear Landau damping, and wave decay. Nonlinear models have been studied in both 1D standalone codes and implemented in the fluid-like 3D LPI code pF3D, requiring that new data structures and input/output routines be written. Results presented at the 57th Annual Meeting of the APS Division of Plasma Physics showed the ability of the trapped particle instability to quench stimulated Raman scattering (SRS) and the reduction in onset threshold for SRS due to particle trapping (Figure 4). 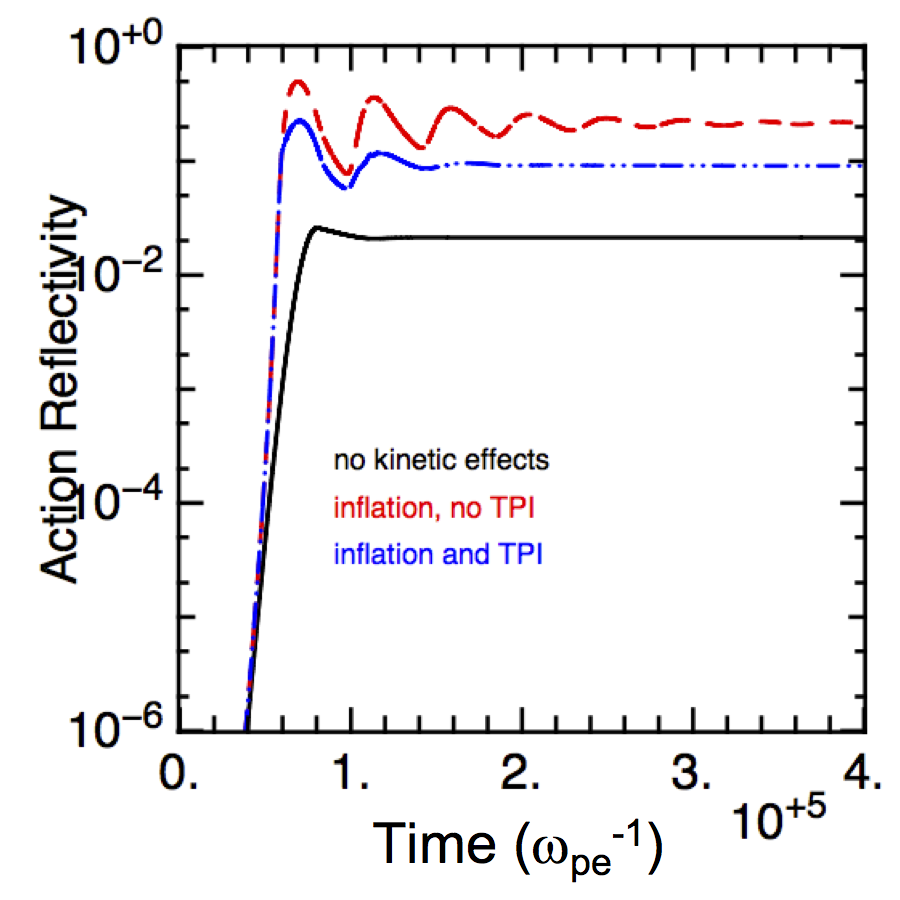 In addition to the key scientific results described, significant improvements to the LOKI code were made by Jeff Banks and Bill Arrighi. The calculation order was increased from 4th to 6th, which improved the Poisson-solving step and increased the speed of the code by a factor of ten for a given solution's accuracy.

The development of high drive platforms, for which detailed and quantitative knowledge of the expected LPI and associated backscattered light is essential, benefits the Stockpile Stewardship Science focus area, in addition to high-energy-density (HED) physics. Advancing simulation capability by extending the physical regime of the applicability of fluid codes increases the global impact of current simulation efforts at the Laboratory and provides a basis for future predictive and diagnostic simulations. This project has added further enhancements to the unique suite of the Laboratory's HED physics simulation codes by extending the capabilities of the two-dimensional Vlasov code LOKI.

There is vigorous basic-science interest in the research presented in a range of fields (e.g., LPI, astrophysical plasmas, energy manipulation, multi-scale modeling, and HED physics). This project promotes continuing expertise in LPI at the Laboratory.

The allocation of resources afforded by this project has permitted the achievement of the primary objectives for this research. Scientific results have been shared with the wider community through publications and presentations. Further research is required to fully employ the information gathered during this research, but the simulation-capability improvements and knowledge gained from this research are important achievements that provide lasting and fundamental significance at the Laboratory.