We have developed a capability for ultrafast synchrotron x-ray diffraction measurements on crystalline materials subject to extremes of pressure and strain rate. This capability includes (1) algorithms and software for the reduction of Laue diffraction data from multiple-crystalline aggregates; (2) design for an arbitrary waveform laser-compression drive, based on existing technology developed at LLNL, capable of operating over a wide range of pressures and strain rates with good repeatability and high throughput; and (3) an apparatus for heating and cooling laser shock-compression targets. We applied these developments to a set of first-of-kind measurements of the kinetic and temperature dependence of strength in an iron–nickel alloy (Invar) as well as aluminum, titanium, and tantalum. We also performed a pilot experiment illustrating the feasibility of using dynamic Laue diffraction to detect displacive phase transitions, specifically observing the alpha and epsilon phase transition in iron using this new modality.

Enhancing our understanding of material behavior under the thermal and mechanical extremes of high pressure, stress, and strain rate is critically important to a wide range of applications, from energy generation and storage to stockpile stewardship science. We proposed to study the critical phenomena associated with strength and phase transitions in crystalline materials, including kinetic dependencies. The approach involved developing a capability for performing ultrafast synchrotron x-ray diffraction measurements on specimens subject to dynamic compression in situ. This is a novel and growing subfield within the greater time-resolved diffraction measurement community. In particular, we focused on applying both traditional gas-gun loading as well as advanced laser-loading techniques to time-resolved polychromatic (Laue) diffraction. We developed these techniques in close collaboration with Los Alamos National Laboratory researchers using the IMPULSE gas gun at the Advanced Photon Source at Argonne National Laboratory, with the end goal being the (ongoing) commissioning of the Dynamic Compression Sector beam line. We also developed a design for “portable” arbitrary waveform laser-compression drive.

Our main objectives were: (1) algorithmic development and software implementation of Laue indexing and strain-fitting software, (2) a shock-loading experimental campaign on laser-loading platforms, (3) a shock-loading campaign using ballistic impact at the Dynamic Compression Sector beam line at the Advanced Photon Source, and (4) design and construction of the arbitrary waveform laser-compression drive.

To meet this objective, we developed (1) a new, generic geometric model for diffraction,1 (2) background subtraction and feature extraction, (3) orientation indexing,2 and (4) deviatoric strain fitting.2 The developments were merged into Livermore's open-source heXRD code base used for the analysis of high-energy x-ray diffraction data. These developments included a graphical user interface, currently in the form of an interactive Jupyter (IPython) Notebook used for creating and sharing documents that contain live code, equations, visualizations, and explanatory text. Laue diffraction is generally more difficult to handle than monochromatic diffraction in cases where the crystals are deformed (i.e., have a high degree of disorder) and multiple crystals that are distinct in terms of orientation and/or phase that are illuminated simultaneously, as is typically the case during phase transitions. The highly irregular, structured backgrounds often generated during dynamic measurements (e.g., scattering from windows and scattering from plasmas) also exacerbate difficulties in separating signal from noise. The approach we developed is relatively simple in that a single, isolated Bragg reflection can be used to generate a one-dimensional search space for the orientation of the crystallite that generated it. This space is tested directly using a forward projection of the diffraction for each trial orientation, with an estimate of the lattice parameters and space group. This proceeds until the presence of a measured signal in the vicinity of a predicated Bragg peak matches to a large degree. Then, a signal is extracted in local widows to be used for precisely fitting the orientation and deviatoric strain (eight parameters). The entire procedure can be repeated until all detectable features on the image have been accounted for. Figure 1 below shows an indexed body-centered cubic iron Laue pattern from a diamond anvil cell experiment at the Advanced Photon Source. 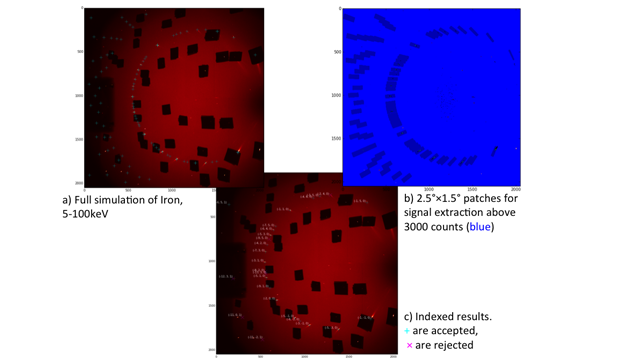 Figure 1. Laue patterning, indexing, extraction, and fitting from a diamond anvil cell experiment on iron at the Advanced Photon Source at Argonne National Laboratory. (a) A Laue pattern measured in transmission for a single iron crystal. The dark squares are shadows from lead pieces used to block strong Bragg reflections from the diamond anvils. The reflections from the iron are seen as the remaining bright spots in the image, and their position and shape hold information regarding orientation, structure, and distortion of the crystal under load. (b) Image from (a) with background removed. All intensities below the signal-to-noise limit are shown in blue. In a forward-modeling approach, the simulated data is used to define "patches" over which to look for iron diffraction signals within a user-specified angular tolerance. (c) Results of the fit with the associated Miller indices for each reflection.

Work on this objective produced interesting results. First, a specimen heating and cooling stage suitable for laser-shock sample packages was developed and fabricated (Figure 2), providing an effecting temperature range of 80 to 800 K.3

Figure 2. Schematic of heating and cooling stage for laser-shock specimen packages, (a) exploded view and (b) in operando. The ability to control temperature allows researchers to probe a large range of kinetics, by effectively varying the relative influence of thermally activated mechanisms (such as strength) with respect to thermal mechanisms (such as twinning and phase transitions).

In the first experimental study, laser-driven shock loading was performed in the face-centered cubic metals aluminum and Invar (nickel–iron alloy notable for its uniquely low coefficient of thermal expansion) using the high-powered laser system at the Trident Laser Facility at Los Alamos National Laboratory. Our goal was to investigate the effect of temperature on the dynamic strength of these metals. The experimental results showed that aluminum has a marked increase in strength (peak elastic stress σE) with temperature, while Invar has a mild decrease in σE (see Figures 3 and 4). This difference is attributed to the differences in electronic structure between the two metals. The magnetic structure of Invar can suppress deviation of a system from being a harmonic oscillator ("anharmonicity") associated with phonon modes by transitioning between collinear and noncollinear magnetic spin states, thereby subduing nonlinear elastic effects. Conversely, aluminum’s magnetic structure lacks the ability to suppress anharmonicity such that it more strongly exhibits nonlinear elastic effects.4

In the second experimental study, laser-driven shock loading was performed on thin samples of iron, tantalum, and titanium at strain-rates up to 107/s, and over a range of temperatures extending from 120 through 800 K, to investigate the influence of temperature on incipient yielding and plastic flow. The selection of materials spanned a range of distinct crystal structures and initial defect densities. The onset of yield was identified using time-resolved velocimetry of the target rear surface to reveal the peak elastic state in the precursor wave front. Measurements on as-received iron reveal a trend of decreasing peak elastic stress (σE) with increasing temperature.4 Subsequent electron microscopy of the recovered material revealed evidence of mobile dislocations coalescing into sub-grains. This is in contrast to the results for the annealed iron where σE remains constant with increasing temperature, and recovered samples showed indications of deformation twinning (when crystals are stressed such that they may be deformed plastically by gliding or sliding along planes between rows of atoms within the crystal structure). For tantalum, the yield strength remains constant for the most part, but has a jump in yield strength at 815 K, indicative of a possible twinning-to-slip transition with increasing temperature. For titanium, the yield strength was generally constant with temperature.5 Together, these studies provide new insight into deformation mechanisms in metals subject to extremes of strain rate, temperature, and pressure. 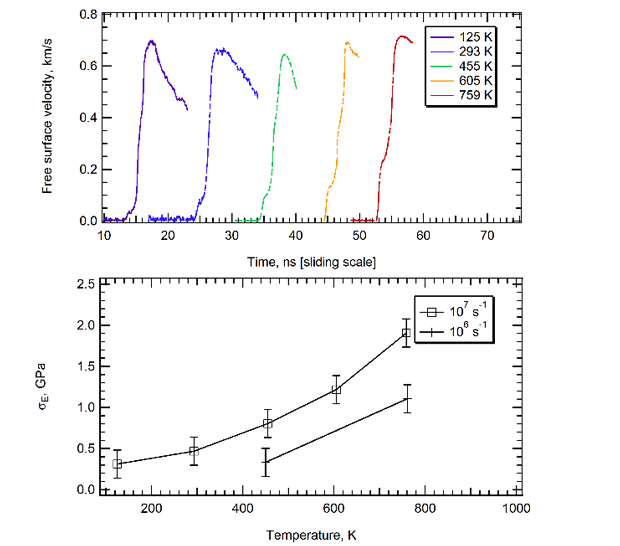 Figure 3. Shock experiment results for aluminum, showing temperature-dependent increase in strength for two strain rates. The top plot shows the free surface velocities extracted from measurements from a velocity interferometer system for any reflector tool. These measurements (arbitrarily shifted on the time axis for clarity) are given as a function of temperature. The lower plot shows the calculated material strength as a function of temperature at two applied strain rates. Both show an increase, which is in direct opposition to the behavior observed at slower rates of deformation, and also the behavior of Invar (Figure 4). 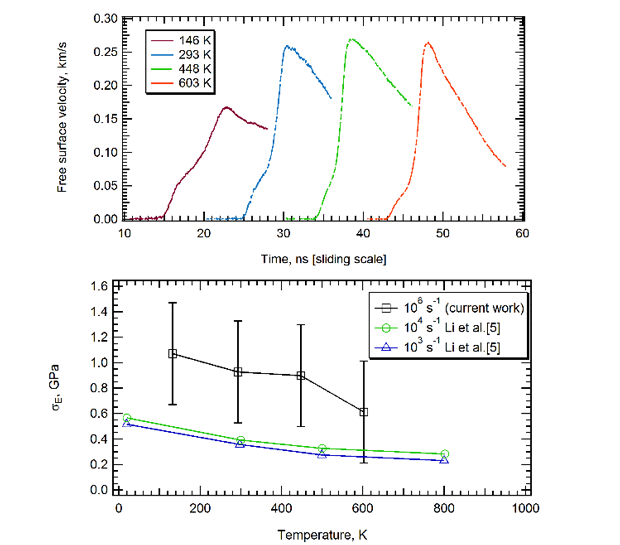 Figure 4. Shock experiment results for Invar, showing temperature-dependent decrease in strength for three strain rates. The top plot shows the free surface velocities extracted from measurements obtained with a velocity interferometer system for any reflector tool. The measurements (arbitrarily shifted on the time axis for clarity) are presented as a function of temperature. The lower plot shows the calculated material strength as a function of temperature at two applied strain rates. The observed decrease in strength with increasing temperature is consistent with the observed behavior at lower strain rates, largely because of the corresponding decrease in thermal barriers to dislocation motion with increasing temperature.

A study for a shock-loading campaign using ballistic impact was undertaken at the Advanced Photon Source sector 16 (managed by the high-pressure collaborative access team), in which the alpha and epsilon phase transition was readily observed using Laue diffraction with a quasi-static loading in a diamond anvil cell.

Design and Construction of an Arbitrary Waveform Laser-Compression Drive

The design for an arbitrary waveform laser-compression drive was finalized and all components were delivered except for one amplifier, which precluded the completion and testing of the full system. Progress made, however, was sufficient to provide confidence for Laboratory programmatic efforts to undertake completion of the drive in FY16. It is currently planned to deploy the system at the Dynamic Compression Sector and to perform stress-relaxation experiments in tantalum.

High-fidelity materials models are a critical piece of the multiphysics simulation codes employed in stockpile stewardship. This project enables the rigorous verification and validation of cutting-edge predictive models for strength and the phase diagrams of metals under extremes of pressure and strain rate, which strengthens the Laboratory’s core competency in advanced materials and manufacturing relevant to the fundamental understanding of material behavior under dynamic conditions.

We developed a capability for ultrafast synchrotron x-ray diffraction measurements on crystalline materials subject to extremes of pressure and strain rate. This capability includes algorithms and software for processing of Laue diffraction images for multi-crystalline volumes. We verified these methods by successfully indexing a mixed-phase iron poly-crystal under quasi-static deformation. A specimen holder capable of cooling and heating laser-shock targets from 80 to 800 K was developed and employed in a laser-shock experimental campaign aimed at understanding the temperature and kinetic dependence of strength. Those experiments—performed initially without diffraction—yielded some interesting results that provide motivation for ongoing work. Finally, a semi-portable arbitrary waveform laser-compression driver was designed. The exit strategy is robust, and continuing work involves completing the experimental campaign on phase transitions in iron at the Dynamic Compression Sector beam line at the Advanced Photon Source. Support has also been secured for additional iron shots at the OMEGA laser facility at the University of Rochester. The analysis methods that were developed are now being applied to diffraction data measured at LLNL's National Ignition Facility.