We are investigating the interactions between Rift Valley fever virus and the innate immune cells in mice. This will allow us to determine the ability of the virus to infect various types of cells, as well as any preference the virus has for infecting one cell type over another.

Resident innate immune cells within the brain are known to play key roles during viral infections, contributing to clearance of the invading pathogen and/or promoting inflammation-induced pathologies. The role of innate immunity during Rift Valley fever (RVF) virus infection of the brain has not been elucidated, despite the fact that this virus causes severe encephalitis upon inhalation. As such, a deeper understanding of viral pathogenesis is critical to inform the development of therapeutics against this lethal virus. We are investigating the interactions between RVF virus and innate immune cells of the brain to provide a deeper understanding of the pathogenesis. RVF is endemic to Africa, but there is a concern about the potential for introducing it into populations in the United States and elsewhere, similar to the spread of the Zika and West Nile viruses. Competent vectors of RVF include more than 30 species of mosquitoes, many of which are the same mosquitoes that harbor Zika virus and are present throughout North and South America. RVF is considered a bioterrorism threat because of the potential for intentional spread by aerosol and the lack of any licensed vaccine or antiviral therapeutics. Exposure to aerosolized virus results in severe neural pathology. We are also investigating the role innate immunity plays in viral pathogenesis by exploring the responses of innate immune cells of the brain in vitro and in vivo following RVF infection. Specifically, our goal is to (1) determine the ability of the RVF virus to infect different cell types of the brain in experiments outside of an organism, (2) investigate innate immune responses to the virus with experiments outside of an organism, and (3) investigate innate immune responses to the virus in the brain in a living organism.

Successful completion of this project will result in the first in-depth investigation of the interactions of the resident innate immune cells in the brain with the RVF virus. Specifically, we will determine the ability of the virus to infect various types of brain cells, as well as any preference the virus has for infecting one cell type over another. In addition, we will complete the first in-depth characterization of innate immune responses in vivo in the brain following intranasal infection with the fully virulent virus. If strong upregulation of genes that stimulate an immune response is observed in the brain, this will provide weight to the assertion that brain pathology following intranasal infection with the RVF virus is largely due to an unregulated host inflammatory response. If large changes in immune-response stimulatory genes are not seen, or if upregulation of genes responsible for immune suppression is observed, this will lend support to the theory that direct viral destruction of tissue is the primary cause of pathology. Discriminating between these two hypotheses is essential to the design of therapeutics that would be effective against exposure to aerosolized RVF virus. Furthermore, these experiments will determine which of the viral-recognition receptors play a role in the recognition and initiation of the immune response to the virus in the brain, which could also have important therapeutic implications because viral-recognition receptor-based therapeutics are the subject of intense research.

Our work supports the NNSA's goal of expanding and applying our science and technology capabilities to deal with broad national security challenges. Specifically, understanding the underlying mechanisms of the pathogenesis of this bioterrorism threat is critical to the development of therapeutics; thus, this research directly addresses the Laboratory's research-and-development challenge in the area of chemical and biological countermeasures, and strengthens the Laboratory’s core competency in bioscience and bioengineering.

In FY17, we (1) confirmed RVF virus infection of microglia and astrocytes (types of cells relating to immune defense and neurotransmission, respectively) using both cell lines and primary cells isolated from mouse brains; (2) explored the innate immune response of microglia and astrocytes to RVF virus infection using the BSL2 strain of the virus; (3) used cells derived from both wild type and genetically deficient mice to determine that microglia mount a robust response to RVF virus infection that includes the upregulation of myriad innate immune response genes, as well as the upregulation of cell-surface activation markers; and (4) determined that the response of microglia is dependent on the mitochondrial antiviral-signaling protein but is independent of the viral sensor known as toll-like receptor 7 (TLR7), and that the response of infected microglia involves a secreted component that affects the activation state of neighboring uninfected microglia and astrocytes (see figure). 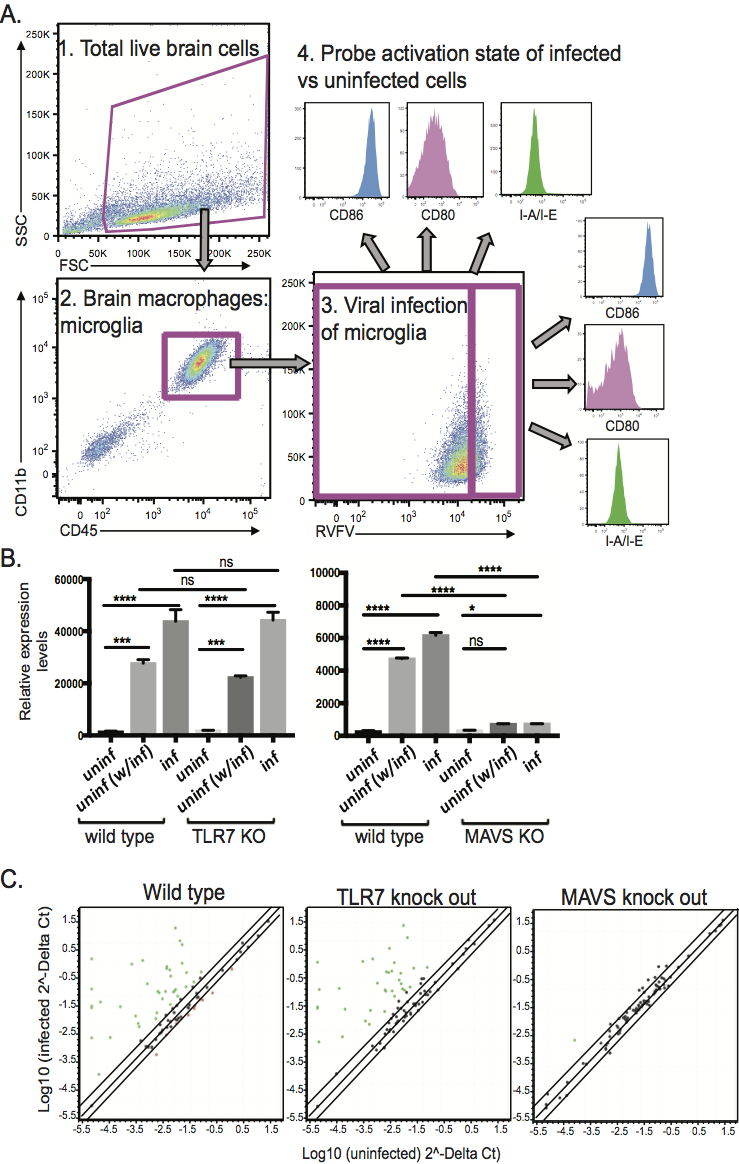 Microglia mount a robust immune response to the River Valley fever (RVF) virus that is dependent on mitochondrial antiviral-signaling proteins (MAVS) and independent of the viral sensor known as toll-like receptor 7 (TLR7). Microglia cells isolated from wild type (normal) mice and mice genetically deficient in either TLR7 or MAVS were infected with the RVF virus and the innate immune response was assessed using two different methods. Expression of key activation proteins on the surface of microglia was assessed using flow cytometry. (A) Depiction of the gating strategy used to identify live microglia that are infected with RVF virus and then assessed for activation protein expression (CD86, CD80, and I-A/I-E). (B) Summary of data for one such activation protein, CD86, demonstrating that its expression on the surface of microglia is dramatically increased upon RVF viral infection compared to levels observed on uninfected cells (uninf). This increase is observed not only in infected cells themselves (inf), but also in cells that are present within infected cultures but are themselves uninfected (uninf [w/inf]), suggesting that infected cells secrete factor(s) that influence the activation state of neighboring cells. Similar levels of enhanced CD86 expression were observed on TLR7 knock out (KO) cells as wild type; however, this enhancement was almost entirely abrogated on MAVS KO cells, suggesting that MAVS were involved in the response of microglia to RVF viral infection, whereas TLR7 is not. Similar results were also observed with CD80 and I-A/I-E expression (data not shown). The importance of MAVS vs. TLR7 in the response of microglia to RVF virus is further supported by quantitative polymerase chain reaction (PCR). (C) The expression of 84 genes involved in innate immune responses was assessed at four hours post infection in microglia derived from wild type, TLR7 KO and MAVS KO mice. Green data points represent genes that are upregulated at least two-fold over uninfected cells. Cells derived from TLR7 KO mice exhibited a response similar to wild type cells, whereas cells derived from MAVS KO mice were unresponsive to infection.