The creation and investigation of high-energy-density matter opens the route to important applications ranging from material processing to remote target destruction to creating conditions for nuclear fusion. We plan to generate and study matter in extreme conditions by irradiating targets of nanometer-scale wire arrays with high-energy (up to 100 J), short pulses (less than 1 ps) from Livermore's Titan laser. Our study extends by two orders of magnitude in energy the recent experiments conducted at Colorado State University and will allow us to achieve regimes where matter is concomitantly at temperatures at or above tens of kiloelectronvolts with ion densities approaching solid, leading to pressures as high as 500 Gbar. This region is appropriately named ultrahot dense matter. Our project will also allow us to efficiently convert the laser light into picosecond x-ray pulses with unprecedented efficiency.

We expect to achieve energy densities of about 50 GJ/cm3, bulk electron temperatures in excess of 100 keV, and pressures at the nanometer-scale target wire center of about 500 Gbar, exceeding those in the Sun's core. We will also generate compact multiple-kiloelectronvolt x-ray sources with efficiencies exceeding 50%. We will diagnose the temperature, ionization states, and radiation spectra of the Coulomb explosion of nanowires and study their nonlocal thermodynamic-equilibrium physics and opacities, along with radiation absorption by dense nanostructures and plasma kinetics. The experiments will be designed and analyzed using numerical simulations, leveraging LLNL capabilities. In addition, we anticipate the demonstration of ultrahigh-dense-matter principles and development of a high-brightness picosecond x-ray source.

This project will enable the generation and study of ultrahigh-energy-density physics and the creation of ultrabright picosecond x-ray sources, contributing to the Laboratory's high-energy-density science core competency. As such, the project is relevant to the study of materials under extreme conditions and the stockpile stewardship science strategic focus area, and therefore ultimately, to the nation's defense mission. It also contributes to the Laboratory's inertial fusion science and technology focus area, and is applicable to the fields of technology and engineering of nanostructure fabrication.

In FY16, during our experimental campaigns at the Titan and COMET lasers at Livermore's Jupiter Laser Facility, we (1) compared gold, nickel, and silver nanometer-scale wire arrays versus flat targets (see figure); (2) demonstrated reduced reflectivity, by greater than fourfold when using nanowire arrays; (3) increased signature K-alpha emission of an electron transition to the innermost K shell by threefold to approximately fivefold and the continuum x ray by threefold versus flat targets; (4) enhanced hot electron temperatures by greater than 1.6 times and enhanced conversion efficiency about 3 times, into greater than 40-keV x rays, which demonstrates laser light trapping and a significant increase in laser energy coupling—the particle-in-cell simulations we are running in parallel indicate room for further improvement; and (5) continued our collaboration with the Atomic Weapons Establishment in the United Kingdom with shots performed at their Orion Laser Facility, which confirmed results obtained at the Jupiter Laser Facility. 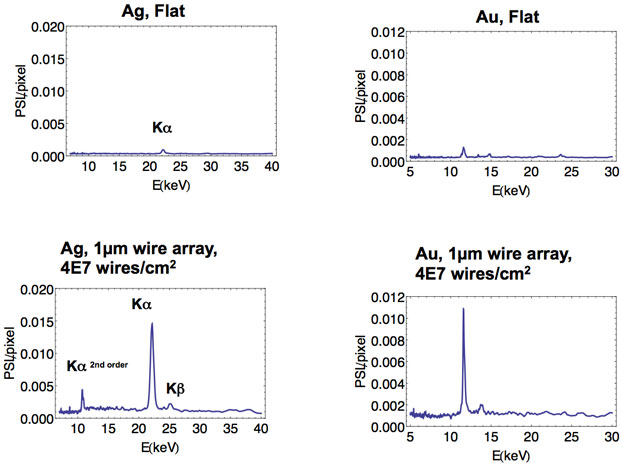