We developed an inductively coupled plasma flow reactor to investigate chemical kinetics relevant to Inertial Confinement Fusion energy reactor design. In a fusion reactor, carbon-based materials are exposed to harsh environments that could cause the degradation of plasma-exposed components and impact the reprocessing of target materials. To obtain the high-temperature chemical kinetics data needed to mitigate these issues, we designed the flow reactor to create an environment similar to that obtained in a fusion reactor, which enabled the exposure of target reactants to extremely high temperatures, on the order of 10,000 K. At this temperature, all reactants dissociated into their constituent atoms, followed by the characterization—through spectroscopic techniques—of molecular species formed as the plasma cooled. This report describes the design, simulations, and operating parameters for the plasma flow reactor, as well as the spectroscopic techniques deployed to characterize chemical kinetics and measurements. Additionally, we briefly discuss the use of the plasma flow reactor to address the chemical kinetics of radionuclides relevant to nuclear forensics.

Non-combustion related chemical and physical transformations on timescales in the millisecond to sub-second range are relevant for a number of applications where the following occurs: (1) non-equilibrium conditions (i.e., chemical kinetic rates) influence the concentrations of final products; (2) the relevant reactant density may be substantially lower than ambient density, increasing the time to equilibrium; (3) the temperatures of relevant reactions may be substantially higher than found in combustion; (4) slower processes like condensation are important; or (5) processes with exotic reactions or rare elements become involved. Under these circumstances, assumptions that are valid in the context of combustion or standard conditions may not apply, and fundamental quantities (such as reaction cross sections) may not be available.

Inductively coupled plasma (ICP) generation (Boulos 1985) has several well-known applications. It is often used for the determination of elemental chemical concentrations via emission or mass spectroscopy (Thompson 1989), the investigation of fundamental properties of plasmas (Godyak 2013), and material synthesis (Cappelli et al. 1990, Kim et al. 2009). However, this method is also useful for investigating longer timescale chemical kinetics starting from very high temperature, at which molecules are dissociated to their constituent atoms. In particular, ICP flow reactors generate a continuous, steady flow of advantageous reactants compared to transient methods like combustion. These advantages include high signal-to-noise that allow low signal intensities to be integrated over long time periods, flexibility in controlling the distribution of analytes, and the ability to simultaneously observe qualitatively disparate phenomena such as chemical kinetics and condensation processes over several orders of magnitude in time. Also, since the states of interest are continuously generated, time dependent diagnostics (such as short-pulse lasers) are not necessary—the observation of time-dependent effects is implicit in the design of the instrument.

Inertial Confinement Fusion (ICF) requires the very rapid compression of a target comprising a spherical shell that contains a deuterium–tritium mixture (Lindl 1995). Rapid extreme compression and heating of this mixture results in deuterium–tritium nuclear fusion, and the generation of heat that may ultimately be used for commercial power generation (Hurricane et al. 2014). Schemes for realizing commercial ICF energy envision a large chamber analogous to the target chamber used at Livermore's National Ignition Facility into which fusion targets would be injected at a relatively high rate (on the order of 10 Hz) and result in a continuous input stream of target materials that include carbon and tritium (Latkowski et al. 2011). As such, the removal of target waste material is a critical issue for fusion energy schemes since radioactive hydrocarbons can condense as solids on the inner wall of the target chamber, creating handling and contaminated waste problems, complicating reprocessing, and degrading the mechanical integrity of the chamber wall (Latkowski et al. 2011).

One proposed solution to the accumulation of graphitic carbon in a fusion energy chamber was the addition of oxygen to the chamber with the goal of removing carbon as carbon dioxide gas, but given the operating conditions of a fusion energy chamber (i.e., continuous ~100-ms period cyclic intense heating followed by rapid cooling), chemical kinetics—rather than equilibrium chemistry—may play a limiting role in determining the dominant products. In terms of timescale, temperature range, and experimental convenience, an ICP-based gas flow reactor was well suited to determine the significance of rapid heating and cooling on the formation of hydrocarbons versus carbon dioxide, and to more generally address the question of rapid chemical kinetics in fusion energy applications.

Generally, the formation of acetylene—whose optical properties are well characterized—precedes the formation of complex hydrocarbons. We presented results addressing this question by examining the formation of diatomic carbon (C2) radicals and acetylene (C2H2) following extreme dissociative heating and subsequent cooling of acetylene and oxygen in an ICP-based flow reactor over a timescale ranging from milliseconds to less than a second (Frenklach 2002). 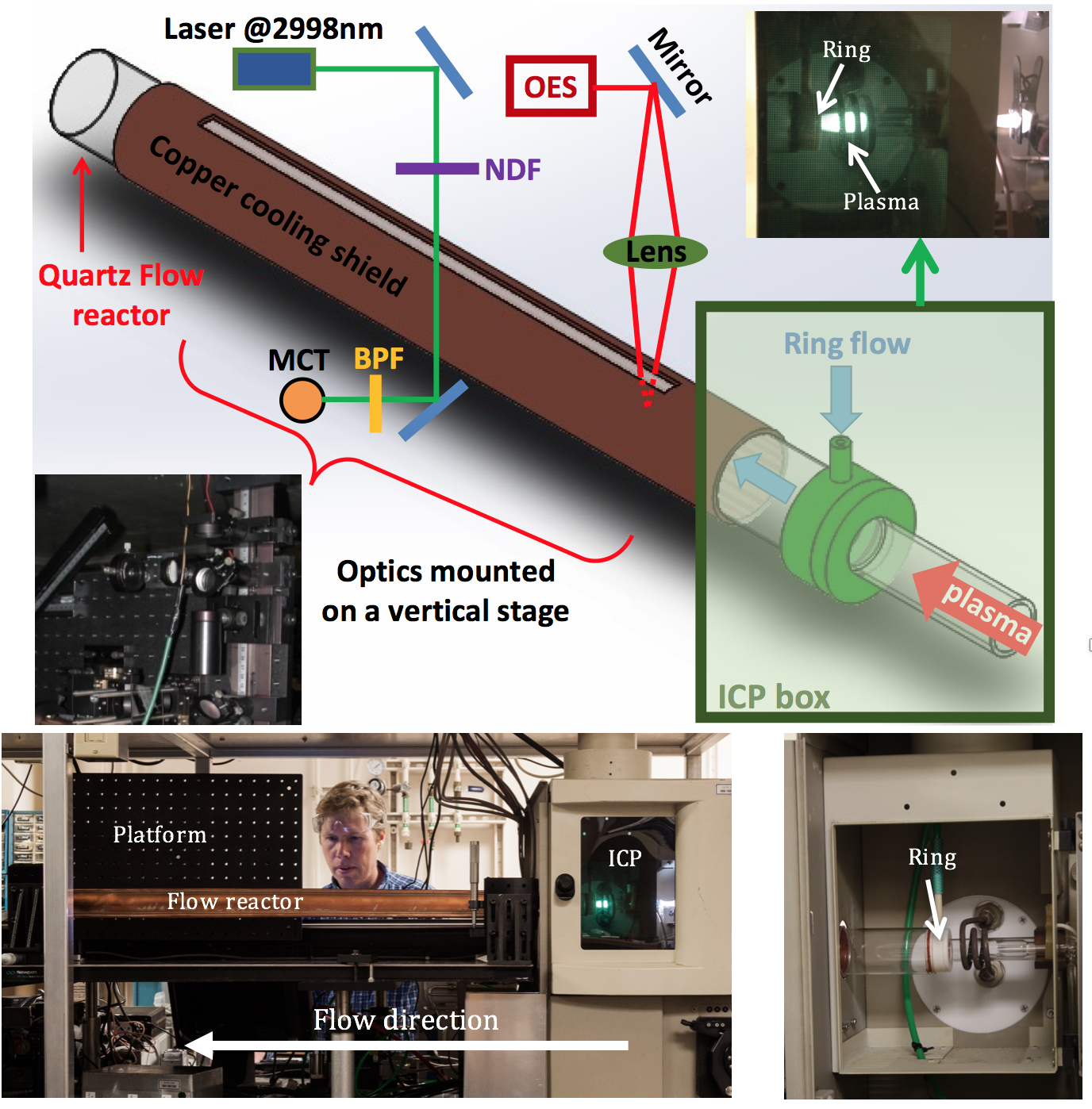 Analyte as either a gas mixture or nebulized solution, along with a buffer gas, typically argon, was injected into the gas flow upstream of the plasma generator and heated to approximately 10,000 K in the plasma generator, which dissociated analyte molecules into their constituent atoms. Downstream flow into the flow reactor after the "ring flow" injector cooled on a less than 10-ms timescale, which allowed dissociated atoms to recombine into molecules. Analyte volume was typically much smaller (10-4) than the total buffer volume. Cool buffer gas was injected into an outermost ring flow in part to keep the gas temperature within a safe range for the instrument and also to enable, via variation of the flow rate, some control of the temperature of the gas downstream from the plasma generator. A water-cooled copper sleeve surrounded the flow reactor. Notches were cut into the sleeve to allow access to the optical probes.

Total gas flow through the reactor was typically between 20–30 L/min, and the analyte flow was as low as some milliliters per minute. Ideally, the analyte flow rate should be as low as detectable to extend the timescale of chemical kinetics by reducing the density of analyte, and thus the frequency of collisions between reactants. The flow velocity through the reactor varied, scaling with temperature from 1–10 m/s, so the timescale of reactions proceeding in the flow scaled to about 1–10 mm of reactor length per millisecond of time. As such, particularly for regions of flow at high temperature, we obtained sufficient time resolution to investigate chemical kinetics on the timescale of the problem, which was about 100 ms.

We implemented two types of optical diagnostics. The first was an infrared line absorption for identifying acetylene, and the second was an optical emission spectroscopy, which could also be used to identify molecular diatomic carbon at high temperatures and to measure temperatures. In the downstream portion of the flow reactor, a high-temperature thermocouple was used to directly measure the temperature of the gas flow.

Here, a continuous wave distributed feedback interband cascade laser (Nanoplus DFB ICL) was used for measuring acetylene absorption. The wavelength output of the diode was varied over an approximately 2-nm range around the center wavelength by rapidly scanning the drive current and comparing the total absorption of acetylene with and without the ICP flow reactor on, as shown in Figure 2. Since the lines of this molecule in this wavelength region have very narrow linewidths, these scanned wavelength measurements had enough bandwidth to spectrally resolve the absorption features of acetylene. The absorption measurement has a sensitivity of better than 3 ppm. 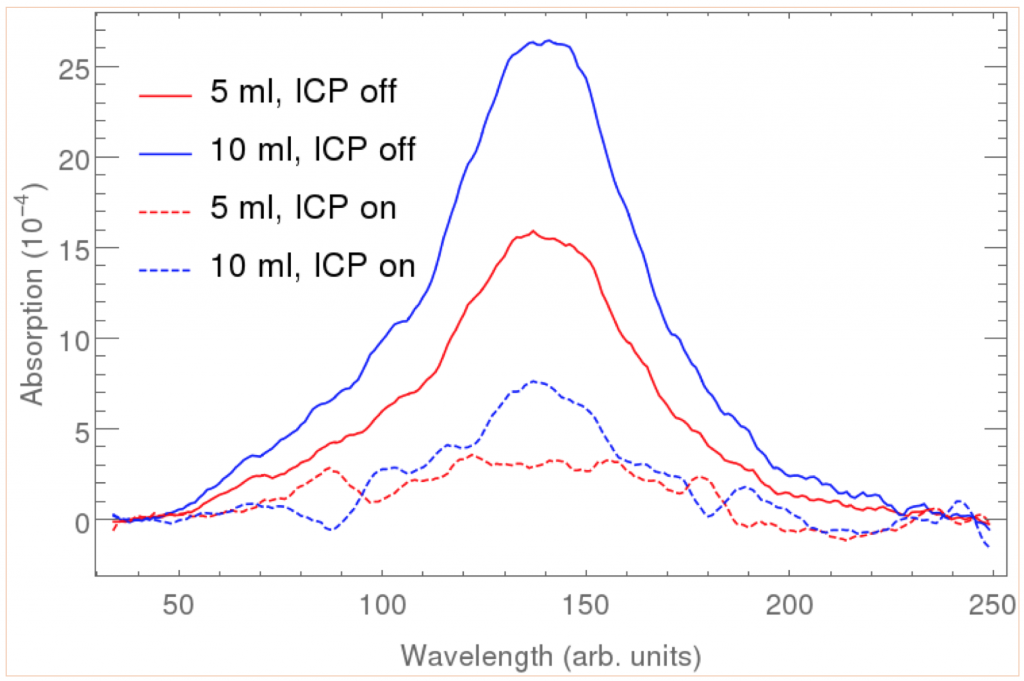 Figure 2. Acetylene absorption spectrum for two different acetylene flow rates (in the analyte injector) with the inductively coupled plasma (ICP) flow reactor on and off, in an argon buffer flow of 22.3 L. The total flow through the reactor includes other contributions such as the "ring flow." The integrated signal is sensitive to changes in absorption of greater than optical density 4, with the measurement sensitive to acetylene densities about 10-5 lower than atmospheric molecular density. These measurements showed that about 20% of the acetylene is recovered after dissociation in the ICP flow reactor in the absence of oxygen.

Optical emission spectroscopy was used for the detection of hot diatomic carbon radicals downstream from the plasma generator. This method is very sensitive to the presence of diatomic carbon at high temperatures, and allows estimates of the temperature (Parigger et al. 2015). An example of the emission is shown in Figure 3. 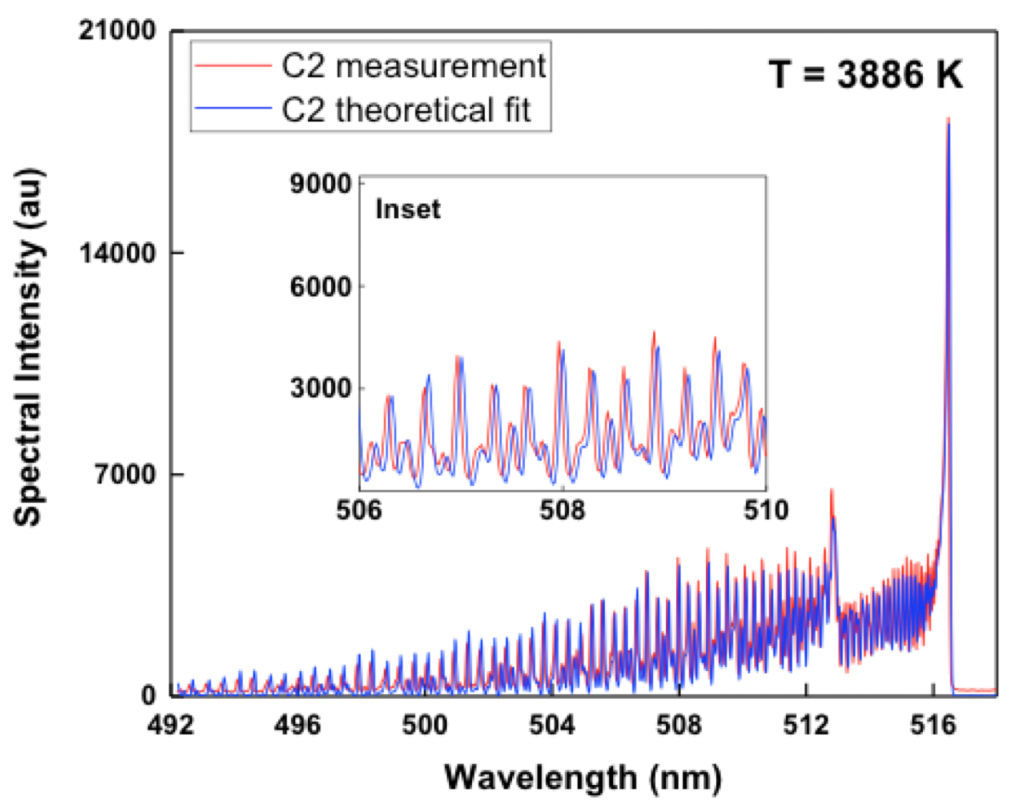 Figure 3. Close-up of emission spectrum of diatomic carbon (C2) downstream from the plasma generator. As more readily seen in the enlargement (see inset), a fit to the profile gives an estimate of the temperature (Parigger et al. 2015).

Modeling included a flow component to determine the flow and temperature conditions of the reactor, and a chemical kinetics component. Because the energetics of the system are dominated by the ICP flow reactor and buffer flow, rather than the chemistry of the reactants, simulations of the buffer flow only occurred first to determine the temperature and density conditions in the flow reactor followed by chemical kinetics simulations to determine concentrations. Generally, these simulations were consistent with our observations found in Figure 4. Specifically, as can be seen on the left of the figure, we observed acetylene far downstream of the ICP in the flow reactor, which was consistent with a more accurate, kinetically-limited model of acetylene formation in the absence of oxygen, and inconsistent with an equilibrium model. As shown on the right, in the presence of oxygen, COX formation rapidly consumed all carbon, which was also consistent with our observations.

Generally, the kinetics of all carbon formation are substantially faster than the relevant timescale envisioned for fusion energy applications (100 ms). In the absence of oxygen, optical emission spectroscopy showed very rapid recombination of carbon within centimeters of exiting the high-temperature plasma, which indicated reformation of diatomic carbon on a sub-10-ms timescale. At lower temperatures downstream—and longer timescales—acetylene reformed at concentrations consistent with simulations that included chemical kinetics, indicating that equilibrium calculations are not sufficient to describe chemistry in this system. Diatomic carbon emission downstream from the plasma generator is shown in Figure 5. 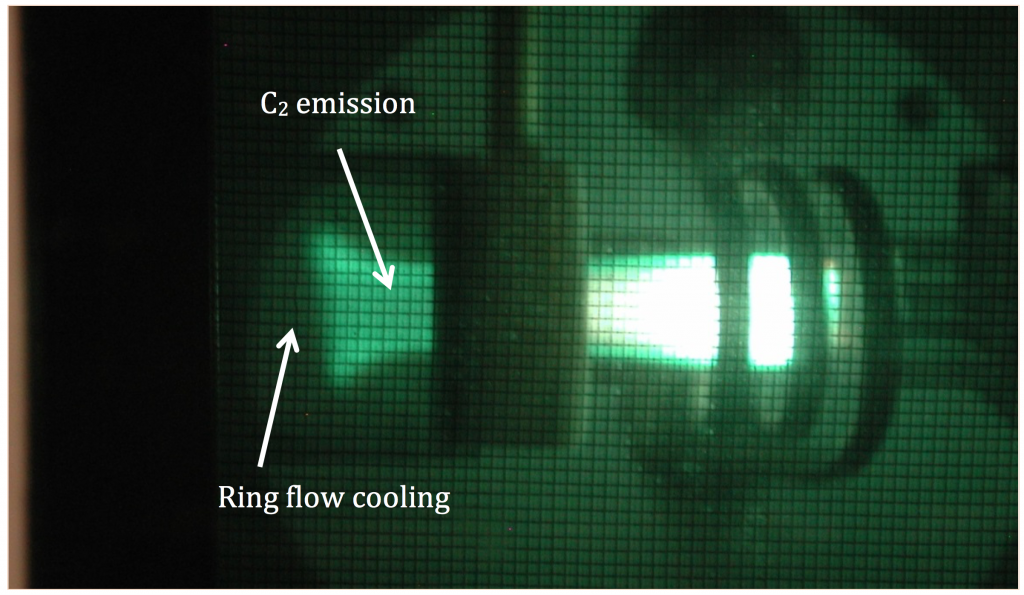 Injection of oxygen stoichiometric for carbon dioxide formation completely eliminated all diatomic carbon emission within approximately 1 cm (1 ms) of the high-temperature plasma region. This is a strong indication that 1) the chemical kinetics of carbon formation are very fast —essentially the chemistry of carbon-carbon bond formation is not significantly limited by kinetics even for very fast (<10 ms) cooling rates, and 2) the formation of COX still nonetheless dominates the chemistry when stoichiometric oxygen is present—on a timescale as fast or faster than the formation of diatomic carbon. The lowest carbon number densities of the study (about 10 ppm standard temperature and pressure and about 1014 carbon atoms per cubic centimeter) were approximately 10 times larger than the density envisioned in fusion energy schemes. However, scaling the reaction rate for density using conventional models did not change the expected timescale of the reaction by more than a factor of 10—for the formation of carbon monoxide. Conservatively, the conversion to COX under these conditions would remain less than 10 ms.

In conclusion, assuming quantities of oxygen stoichiometric with carbon for carbon dioxide formation are added to an inertial fusion energy chamber, chemical kinetics will not limit the formation of COX on a 100-ms—and possibly much shorter—timescale.

This work had two principal impacts on mission:

This project answered its motivating inquiry: In an ICF-based energy generation scheme, the addition of oxygen will remove target-injected waste carbon as gas and avoid the accumulation of tritium-containing graphitic solids in the chamber. This process is not limited by chemical kinetics on a timescale of less than 10-ms.

Continuing research will include a significant nuclear forensics component. There is broad interest in the empirical data generated by this instrument, which is currently one of a kind, for the empirical calibration of models of fallout formation.