Magnetic fields abound in the universe, yet their generation and amplification mechanisms are still a mystery despite decades of research. Astrophysical plasma interactions are considered to play a key role in these processes. Weibel-mediated collisionless shocks are a possible mechanism for magnetic-field generation. The Weibel plasma instability occurs under high-velocity plasma flow conditions. The significance of this particular instability is its electromagnetic nature—it is predicted that an important fraction of the plasma flow's kinetic energy will be converted into magnetic energy. Not tested experimentally are the production conditions, the plasma parameters (such as ion and electron temperatures), and velocities at which the Weibel instability will dominate the interaction. We plan to explore the fundamental microphysics of collisionless shock formation and magnetic-field amplification using laser-produced plasma streams that can be associated with the dynamics of astrophysical processes. Specifically, we will study the generation of Weibel-mediated collisionless shocks and amplification of magnetic fields. Plasma interactions will be investigated using high-velocity plasma streams. Laser experiments are ideal to study these phenomena in a controlled fashion. This project will use the OMEGA laser facilities at the Laboratory for Laser Energetics in Rochester, New York, and Livermore's National Ignition Facility, where very-high-velocity and hot plasmas can be created. Our study will produce key understanding of the basic fundamental plasma physics related to astrophysical magnetic fields.

If successful, we expect to generate a wealth of physics results related to magnetic-field generation and amplification. The Weibel instability is conjectured to be a leading mechanism for creating magnetic fields in space, form collisionless shocks, and provide the required electromagnetic turbulence for cosmic-ray acceleration in these shocks. This project will enable us to observe and measure the creation and amplification of magnetic fields from collisionless shocks and the Biermann battery mechanism, in which a magnetic field is generated from a thermally generated electric field. Our approach will consist of designing properly scaled experiments that can explain magneto-hydrodynamic processes using available magneto-hydrodynamic and particle-in-cell codes. We will perform experiments to observe fully formed collisionless shocks and utilize existing Thomson-scattering diagnostics to understand the plasma conditions. In addition, we will design and construct a suite of diagnostics that measures the strength of electric and magnetic fields, and perform high-power laser experiments to demonstrate the concept. While developing these experiments, we will add new measurement capabilities at the National Ignition Facility that can characterize magnetic field structure, electron spectrum, and plasma density.

In FY16 we (1) completed two experiments at the National Ignition Facility to generate collisionless shocks using high-Mach-number counter-propagating plasma flows (see figure); (2) used a target capsule implosion to visualize the self-generated magnetic fields and began data processing and analysis; (3) used these experimental results in conjunction with two-dimensional magneto-hydrodynamics simulations to plan additional collisionless shock experiments; (4) collaborated with a Discovery Science campaign at the National Ignition Facility with the University of Oxford to study turbulent dynamos, which may explain the origin of large-scale magnetic fields in stars and galaxies; and (5) completed OMEGA experiments to investigate modifications to target geometry designed to enhance the Weibel instability growth rate. 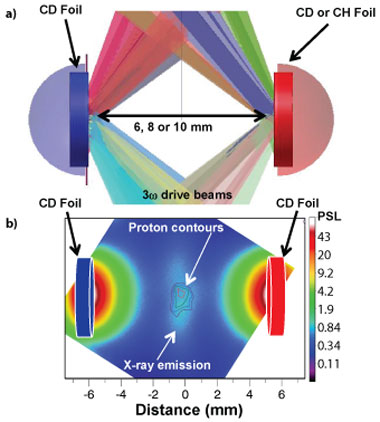 We are performing experiments to investigate the generation and amplification of magnetic fields that lead to the formation of a collisionless shock in a plasma. (a) Experimental setup where 500 kJ of laser energy is used to heat a pair of plastic foils and create high-velocity interpenetrating plasma flows. (b) The x-ray image of the interaction region between the two plasma flows indicates considerable heating where the two plasma flows interact at the mid-point between the foils. Overlayed is the proton emission from the same region (the contours are shown for 95, 90, 85, and 80% of the total proton signal.)