A narrow-band x-ray source is ideal for a variety of applications that rely on the K-edge effect, which is related to the binding energy of the innermost electron shell (K shell) of an atom. For this interaction effect to occur, the source photons must have more energy than the binding energy of the K-shell electrons (K-edge) of the target material. Uses range from medical applications where an absorption edge in iodine injected into the bloodstream can significantly enhance the contrast of fine anatomical features, to Livermore's National Ignition Facility target diagnostics, where detecting the shift in the K-edge of an atom as it ionizes could allow a spatial map of the ionization state in hot plasmas. Current and future generations of these advanced light sources largely depend on high-brightness electron beams. We plan to investigate the potential utility of Compton scattering of laser light to produce x-ray sources for radiography and diffraction measurements. We are studying the physical and engineering limitations on brightness performance of a recently commissioned X-band linear accelerator at LLNL, and investigating x-ray production via Compton scattering using the system. This will enable us to determine limitations of both the peak and average brightness of the machine with respect to per-bunch emittance of x rays and increasing the number of bunches the machine produces in a unique, closely spaced, multiple-bunch mode of operation.

The x-ray performance of a laser Compton light source is tied directly to the brightness of the electron beam or to increases in the beam current and reductions in the beam emittance. We expect to demonstrate, using a combination of modeling and experimental efforts, the viability of x-ray generation from multiple bunches in an X-band accelerator system, and investigate their utility for mission-related applications. Work will include upgrades to the Livermore X-band radio-frequency photo-injector and accelerator system for generating additional pulses. We will also measure an increase in the electron beam brightness and characterize the emittance of multiple-bunch x-ray beams, which will subsequently improve brightness of the x-ray source. In addition, we will model the electron and laser interaction to validate the expected system performance and cross-check beam simulations with measured results. The controls will be upgraded to improve the day-to-day operation of the machine, enhance its capabilities, and more quickly and robustly deliver x-rays to users.

The capability developed under this project lays the foundation for a compact, time-resolved and potentially stroboscopic high-energy x-ray capability applicable to advanced laser light sources, and therefore aligns well with the core competency in lasers and optical science and technology at Lawrence Livermore. Ultimately, the technology developed could be incorporated to serve as a diagnostic on a high-energy drive-system, such as Jasper or the National Ignition Facility at Lawrence Livermore, to perform Laboratory mission-relevant measurements in high-energy-density research.

In FY15 we (1) performed a systematic study of X-band photo-injector brightness, and determined the ultimate performance of the X-band system at various bunch charges; (2) produced and measured x rays from Compton scattering of laser light, and verified qualitatively that the x-ray beam has a very narrow bandwidth (see figure); (3) demonstrated a train of four electron bunches at 87.5-ps spacing, and generated x-rays with this train; and (4) significantly upgraded the control system to allow for rapid tuning and simpler operation of the machine. 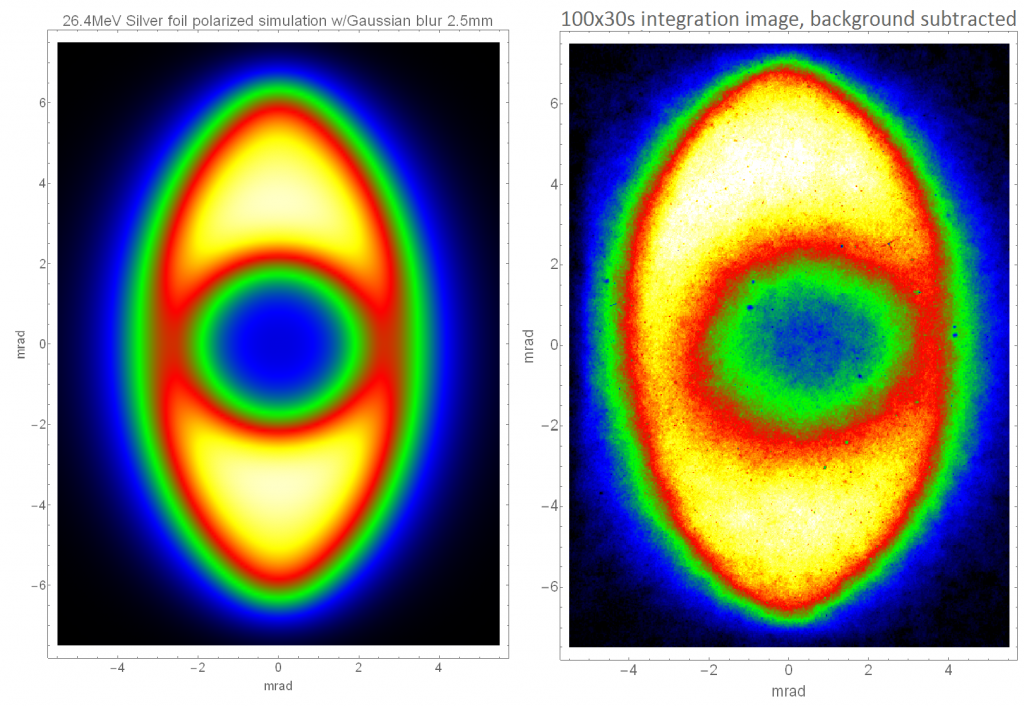