Realistic calculations for quantum many-body systems pertaining to the properties of microscopic systems made of a large number of interacting particles require innovative methods and large-scale computational approaches. In theoretical physics, the problem of mathematically expressing values of a many-particle system is usually so difficult that it requires approximate methods, the most common of which is expansion of basis functions that obey the boundary conditions of the problem. The computational effort needed in such problems can be much reduced by making use of symmetry-adapted basis functions, which exploit the symmetry of the system under investigation. We will study the feasibility of creating a unified approach for the construction of symmetry-adapted basis functions and corresponding matrix elements of Hamiltonian dynamical systems for nuclear and atomic structure calculations. Matrix size for nuclear and atomic structure calculations can be dramatically reduced by using a symmetry-adapted basis set. Traditional techniques based on the algebra of irreducible tensors for using symmetry-adapted basis sets can be exceedingly difficult. We propose an alternate mathematical approach based on the Unitary Group Approach to atomic electronic-structure calculations and its graphical representation, which has been highly successful in quantum molecular structure calculations but has not yet been evaluated for nuclear and atomic structure calculations. We will test the efficiency of a combined approach in which the components of the original problem are re-expressed in terms of standard components on full-fledged problems in atomic structure and on representative Hamiltonian dynamical systems in nuclear structure.

We expect to show that it is possible to code a clean, uncluttered, and readily comprehensible Unitary Group Approach to construct matrix elements for complex Hamiltonians in atomic and nuclear structure using symmetry-adapted basis functions. If feasible, our proposed approach can provide a unified concept and implementation, making it possible to develop a single library that is directly usable for atomic, nuclear, and molecular structure calculations. This would greatly ease the difficult task of developing new codes or modifying existing codes that could solve for heavier nuclei or enable more accurate and efficient atomic calculations.

Reducing matrix size in atomic and nuclear calculations supports the Laboratory's core competency in high-performance computing, simulation, and data science to develop and apply higher-fidelity and increasingly realistic and reliable science and engineering simulations. In atomic physics, the benefit of a single unified approach across several codes and a path towards the development of newer, higher-accuracy codes is relevant to LLNL's core competency in nuclear, chemical, and isotopic science and technology. 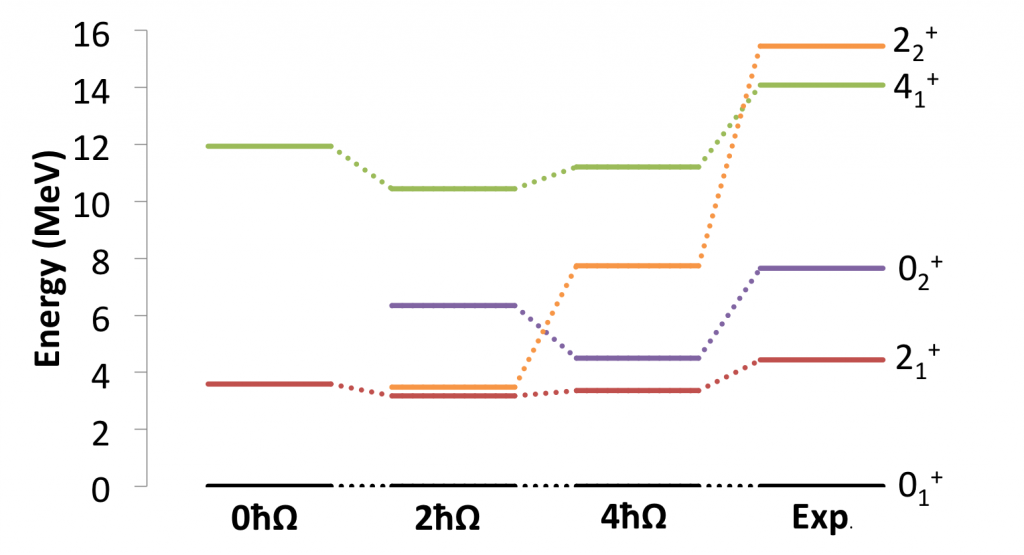 Carbon-12 spectrum using our symmetry-adapted Hamiltonian for different N_max compared to experiment. The eigenvalues of our Hamiltonian successfully reproduce the main features of the energy spectrum of carbon-12, including ordering of the lowest 0+, 2+, and 4+ states.