We are developing and testing a unique treatment for cancerous brain tumors that combines nanoparticles containing chemotherapeutic and immunotherapy drugs. This research leverages and strengthens the nano-scale bioengineering capabilities of a national laboratory to advance a cure for one of the world’s most widespread and deadly diseases.

With an estimated 600,000 deaths in 2016 and approximately 1,700,000 new cases diagnosed in the U.S. alone, cancer remains a significant threat to human health. Chemotherapy, which includes a range of drugs with varied mechanisms of action, remains the gold-standard treatment for most cancer types. However, recent work in the field of cancer therapy has also focused on using the body’s own immune system to aid in tumor destruction. There have been positive results among some clinical trials for treatments that activate the immune system against cancer (immunotherapy), such as one trial reporting a greater-than-50 percent rate of remission from late-stage leukemia that did not respond to chemotherapy. However, many therapeutic candidates fail—only two cancer immunotherapy treatments approved by the U.S. Food and Drug Administration exist, as compared to the more than 200 approved chemotherapy treatments. These immunotherapy treatments, ipilimumab (an antibody-based drug) and sipuleucel-T (an immune cell transplant therapy), were only recently approved in 2011 and 2010, respectively. The main challenge in developing effective immunotherapy has been overcoming suppression of the immune response caused by the cancer itself. One strategy to overcome this is to create a window of opportunity for the immunotherapy by first treating the cancer with chemotherapy, to provide a source of tumor antigens, and then administering immunotherapy to boost the anti-tumor immune response. While this approach has shown an improved immune response against tumors, timing of administration of the two therapies is critical. Our goal is to develop and test several nanometer-scale particle-based chemotherapeutic formulations intended to boost the efficacy of cancer immunotherapy. These formulations will be tested in combination with an immune-system-stimulating formulation that has already been developed through previous work. We will leverage previous work to develop nanoparticle-based chemotherapeutic formulations, as well as nanoparticles formulated with molecules that activate the immune system. We hypothesize that a tandem chemotherapy and immunotherapy combination, using a nanoparticle platform, will elicit a synergistic and more effective therapeutic response than either standalone treatment. Specifically, we hope to demonstrate that this combination therapy inhibits tumor growth.

We expect to demonstrate the efficacy of a synergistic therapeutic regimen utilizing a tandem chemotherapeutic and immuno-stimulatory treatment approach. Nanometer-scale lipoprotein formulations, demonstrated to enhance both chemotherapeutic and immune-system-stimulating molecular performance, will be used to develop a dosing regimen using a well-established mouse-tumor model (see figure). Nanometer-scale particles, such as nanolipoproteins (nanometer-sized soluble phospholipid membranes), are of significant interest to the cancer therapeutic community for their improved pharmacokinetic properties compared to free drugs (i.e., unbound to plasma or tissue proteins) in vivo. In addition, formulations using particles similar to nanolipoproteins have been shown to be more potent than the corresponding dose of a free drug. We will incorporate three chemotherapeutic drugs (paclitaxel, doxorubicin, and gemcitabine) approved by the Food and Drug Administration into nanolipoproteins. Initial nanoparticle formulation and in vitro work will quickly transition into in vivo efficacy studies, paying particular attention to key requirements in balancing both dose and timing between the two key elements of this treatment, enhancing efficacy and minimizing interference between the two treatments. By using nanoparticles as a platform for immunotherapy, we hope to improve delivery of chemotherapeutics to solid tumors, resulting in enhanced tumor death, as well as use immune-system stimulants to produce an effective immune response in vivo. Our goal is to determine the best combination of therapies out of all of those tested. We also intend to optimize the a dosing schedule to prevent the combined therapies from interfering with one another. The final candidate combination therapy will be used as the basis for further work.

Bioengineering on the nanometer-scale supports the NNSA goal of strengthening its science, technology, and engineering base. Specifically, this research develops the Laboratory’s core competency in bioscience and bioengineering by advancing the development of more successful cancer therapies by using a combination of chemotherapy and nanometer-scale, particle-based immunotherapy.

In FY17, we (1) drafted a new integration work sheet (IWS), Institutional Biosafety Committee (IBC) protocol, and Institutional Animal Care and Use Committee (IACUC) protocol, all of which have been completed and approved; (2) identified and are currently evaluating several schemes for incorporating chemotherapeutic drugs into our particles; (3) prepared the first chemotherapeutic formulations for testing in vitro using cells grown in culture and in vivo in the strains of mice that we will be using; (4) prepared material for the immunostimulatory particle formulations; and (5) designed an assay and used it to evaluate the efficacy of our immunostimulatory formulations; (6) began characterizing our chemotherapeutic and immunostimulatory formulations; and (7) began establishing and characterizing our tumor model in mice. 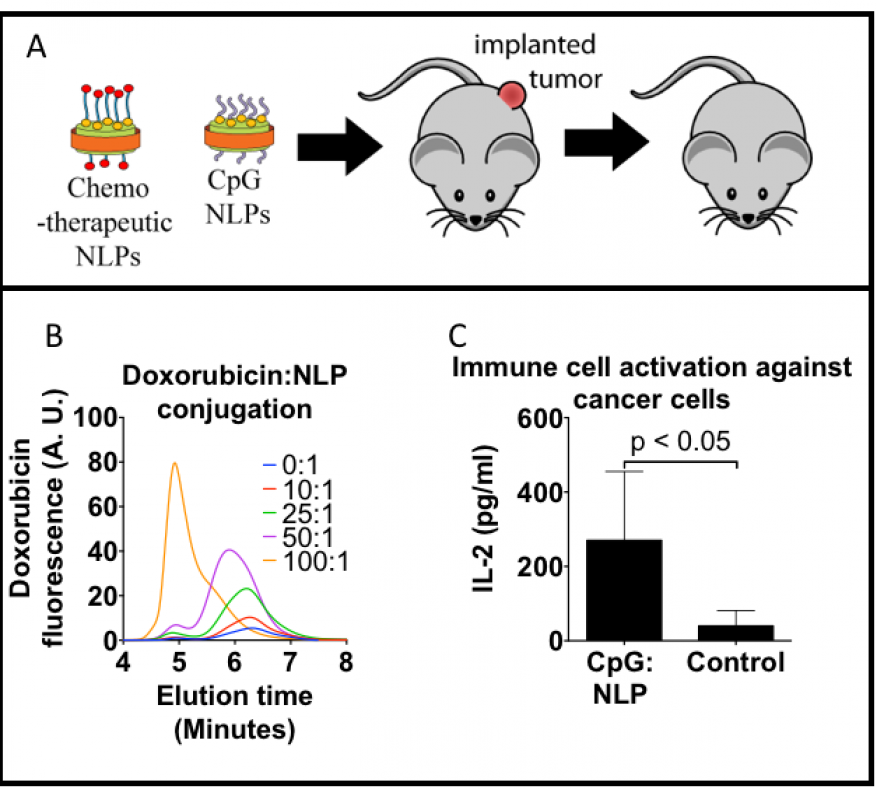 A: Our goal is to develop a treatment for cancer that kills cells through chemotherapy and recruits the immune system to aid in eliminating tumors and metastases. This will be accomplished by delivering compounds (the immunostimulant CpG and the chemotherapeutic doxorubicin) that are proven to be therapeutically active using nanolipoprotein particles (NLPs). B: Size-exclusion chromatography demonstrates successful conjugation of doxorubicin to NLPs. Short elution times correspond to larger particles, and increased peak height is associated with higher doxorubicin content. C: Mice produce an immune response against cancer cells when vaccinated with these cells and CpG:NLPs. This is measured through release of IL-2, a protein that signals immune-cell activation.