This project focuses on design and modeling of the first full International Axion Observatory telescope specifically designed for axion research and cutting-edge dark matter science. Our development of advanced x-ray optics will benefit areas of interest to DOE/NNSA by advancing fundamental science and technology competencies, and supports advances in diagnostics for laser fusion facilities and for nuclear nonproliferation.

Though experimentally confirmed, the Standard Model of particle physics still falls short of explaining the nature of dark matter, which is a crucial component of the universe though its constituents are unknown. Axions are leading dark matter candidates, but experiments have yet to confirm or refute the existence of this elusive particle, and the search is challenging because the axion mass is not known a priori. We are playing a leading role in the scientific analysis of the current Livermore International Axion Observatory pathfinder optic installed at the CERN Axion Solar Telescope, with the goal to either detect axions or axion-like particles or put new stringent limits on their existence. We are also using lessons learned from the pathfinder optic to design and model the first full International Axion Observatory telescope. This project will enable us to develop the first-ever full-revolution telescope specifically designed for axion research and cutting-edge dark matter science, while establishing the Laboratory’s leadership role in the International Axion Observatory. The Laboratory's active role in both axion research and x-ray optics technology affords a unique opportunity to leverage Livermore's deep expertise in astrophysical instrumentation and particle physics to position the Laboratory for participation in next-generation astrophysical and particle physics experiments.

Participation in space science is an important element in Livermore's space security mission research challenge. Providing next-generation capabilities for space security requires a trained workforce with demonstrated excellence in designing, fabricating, and performing science with advanced instrumentation. Our work with a Livermore-built x-ray telescope and the design of a next-generation optic for axion dark matter searches using space science technology will establish and strengthen the Laboratory's preeminence in astroparticle physics, dark matter searches, x-ray optics, and instrumentation technology. The development of advanced x-ray optics also benefits areas of interest to DOE goals in science and energy and nuclear security with advances in diagnostics for laser fusion facilities and for nuclear nonproliferation. 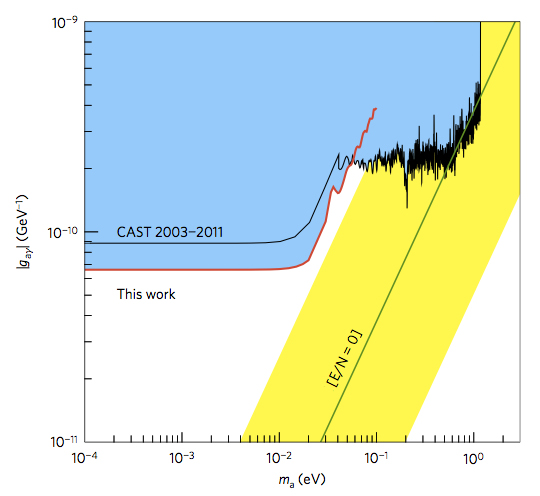 New CERN Axion Solar Telescope benchmark result for solar axions obtained with the International Axion Observatory pathfinder system featuring the Livermore-led x-ray telescope. The figure shows the excluded parameter region at 95% confidence level. The x-axis shows the axion mass (the mass of this postulated particle is not known a priori from the theory) and the y-axis indicates the strength of the coupling between axions and photons. The solid red line indicates the latest results; the solid black line shows previous CERN Axion Solar Telescope results (2003–2011 data). Typical models for the quantum chromodynamics axion (a low-mass boson) are shown as the yellow band, with the green line representing the simplest model. (E/N is the ratio of the two parameters that distinguish different models with the simplest model having E/N=0.) This result is advancing the design of the final International Axion Observatory optic significantly.