Probing the Interface Stability of Implosions

Our goal is to develop and demonstrate a new technique for assessing the in-flight interface density jump in implosions scaled to Livermore's National Ignition Facility. If successful, this project will enable the prediction and control of hydrodynamic instabilities while providing a new diagnostic capability for exploring high-energy-density physics at extreme conditions.

For radiation-driven implosions at advanced laser facilities, the density jump and gradient between any two materials in-flight are determined by the level of radiation preheat, differential opacity between the materials and thermal conduction, and diffusivity. These parameters are difficult to calculate and measure accurately in the warm dense matter regimes of interest at Lawrence Livermore. If the outer layer of a convergent system drops in density below that of the inner layer during the acceleration phase, Rayleigh–Taylor growth of instabilities at the material interface will ensue, potentially leading to catastrophic break-up of the inner layer and reduced compression. Our goal is to demonstrate the capability to assess the in-flight interface stability (i.e., the density discontinuity between the ablator and deuterium–tritium fuel) of an indirectly driven implosion at Livermore’s National Ignition Facility (NIF) by refraction-enhanced radiography. Density jumps and their associated refractive-index jumps can lead to analyzable fringes in point-projection x-ray radiography of curved interfaces. With this project, we will extend this refraction-enhanced imaging (or phase-contrast imaging) commonly used to metrologize cryogenic targets to the convergent in-flight phase of an Inertial Confinement Fusion-layered implosion.

We expect to demonstrate a new technique of slit-projection x-ray radiography for assessing the in-flight interface density jump (or Atwood number) in implosions scaled to the NIF. To accomplish this, we expect to gather continuous time-resolved x-ray radiographs from just after shock break-out to the end of the driving laser pulse. We will demonstrate either the expected reversal in Atwood number in-flight for an undoped high-density carbon-layered implosion or the disappearance of fringes because of ablator–fuel mix. This should provide vital clues as to why such implosions currently are compressing less than expected. As a stretch goal, we will demonstrate the sensitivity of the Atwood number to the level of ablator dopant or the level of hard x-ray preheat by comparing results in gold versus uranium hohlraum target capsules, or doped versus undoped ablators.

This project supports the NNSA goal of managing the nuclear weapons stockpile by developing better models and experiments of radiation hydrodynamics. It also addresses the Laboratory’s high-energy-density science core competency through enabling the prediction and control of hydrodynamic instabilities and the investigation of the effects of plasma opacity and transport properties and maximizing the utility of the National Ignition Facility to explore high-energy-density physics at more extreme conditions.

In FY17, we (1) selected a first-pass baseline target design for a subscale diamond capsule, with and without tungsten dopant; (2) began radiation hydrodynamic simulations of the in-flight Atwood number and experimental signatures; (3) used ray-tracing simulations to begin assessing the fringe degradation due to finite density gradients expected at the onset of mix or thermal and soft x-ray radiation transport across the ablator–fuel interface; and (4) provided the primary laser, instrumentation, and set-up information required for shot scheduling of five provisionally allocated NIF shots. 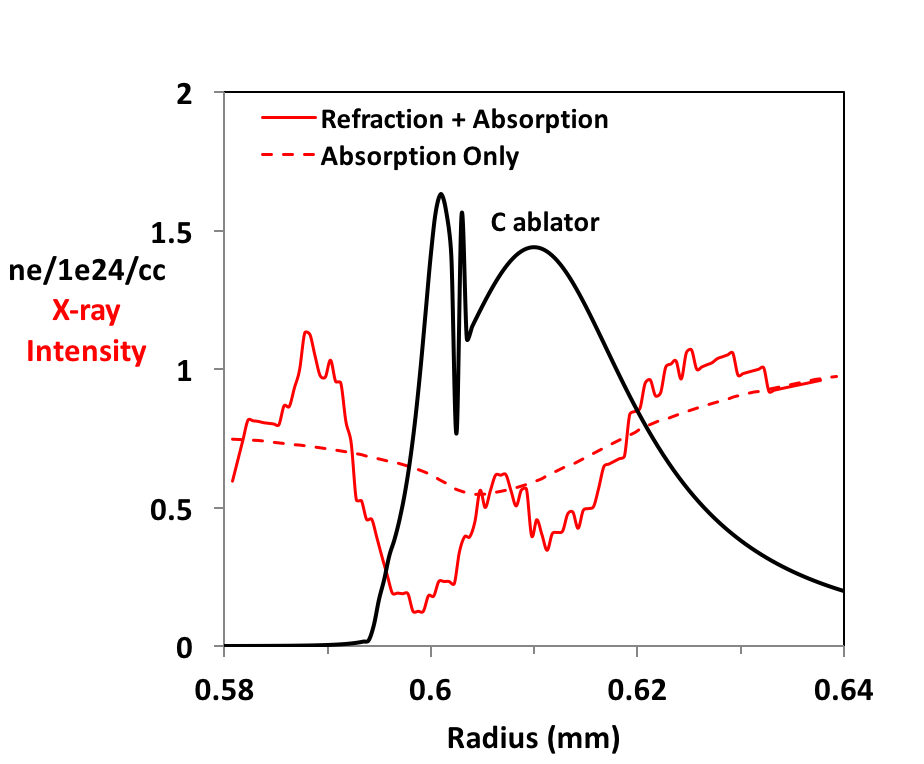