The goal of this project was to determine whether a linac-based or LWFA-based Compton source could meet the requirements for a next-generation radiographic capability for HEDS, national security, and ICF missions. Dubbed ARCHER (Advanced Radiographic Capability – High Energy and Resolution), this project quantitatively determined source brightness requirements for several key HEDS and ICF diagnostics, flowed those requirements back to Compton source requirements (electron-beam and laser), and compared those requirements to present and anticipated electron-beam performances of both traditional linear accelerators and short-pulse laser-driven plasma wakefield accelerators. Finally, high-brightness megavolt x-ray sources based on high-energy laser driven-solid targets were examined in context with Compton sources for radiography of mission-relevant high-density objects.

This study was started with a simple survey of existing high-peak-brightness x-ray sources and a comparison against some of the needs of HEDS diagnostics (respectively, top and bottom portions of the figure below). For reference, both figures include black-body emission curves for a wide range of temperatures. Note that the ~0.5-eV curve for the sun is off the lower-left corner of the chart. Given that the current state-of-the-art for gated x-ray detectors is on the order of 100-ps gating intervals, the brightness of these sources was integrated over that time. The vertical axis shows photons per etendue (in square millimeters per square milliradians) per unit of photon energy (ph/mm 2 /mrad 2 /eV). Traditional "synchrotron" units (ph/mm 2 /mrad 2 /0.1%-BW) use relative bandwidth (BW) rather than absolute energy. Interestingly, from this chart, one can see that laser-driven x-ray sources presently provided by the Advanced Radiographic Capability laser on NIF (labeled ARC Kα and ARC Bremsstrahlung ), which are used to radiograph alpha-particle-heated capsules, would actually be out-shone by a (future) fully ignited fusion capsule. 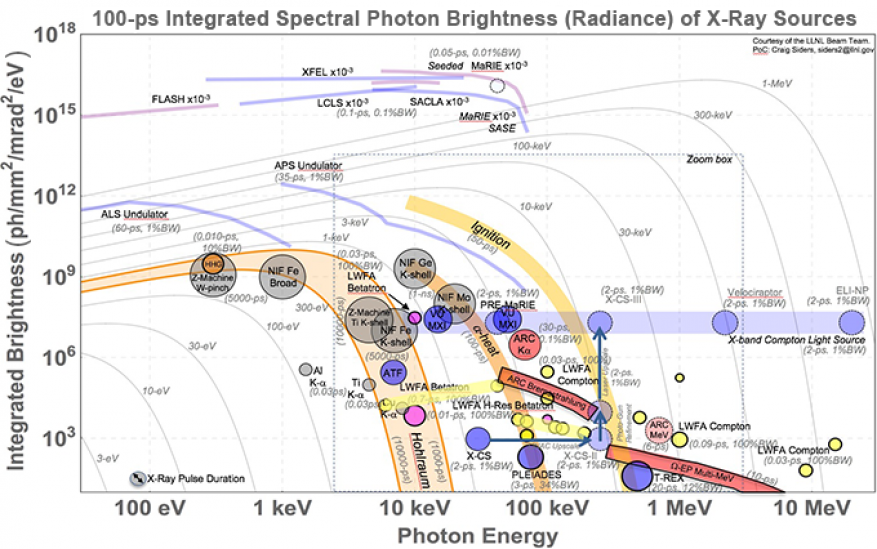 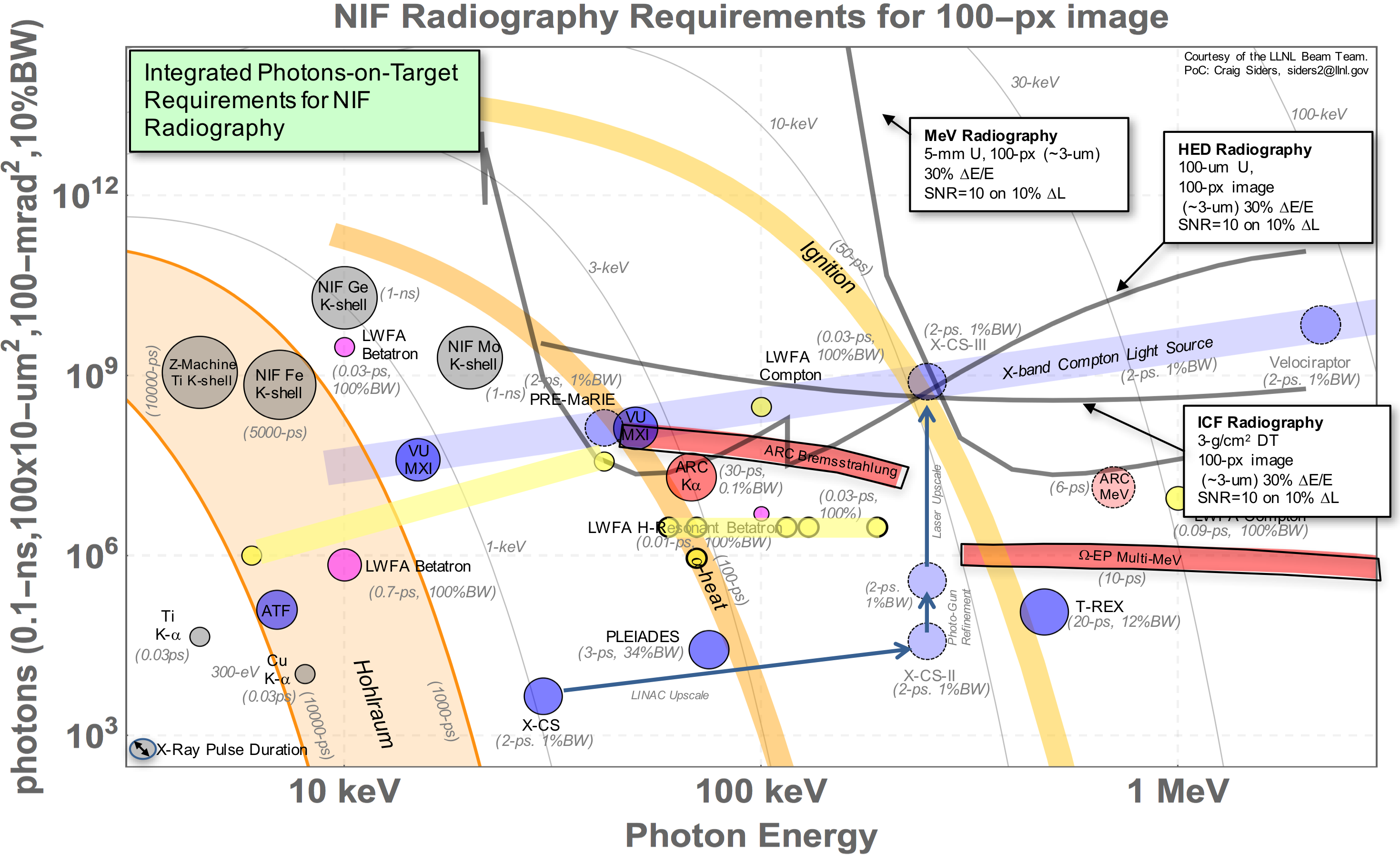 The bottom figure adds to the chart three representative examples of HEDS diagnostic requirements: ICF radiography, represented as a 3-g/cm 2 deuterium-tritium target; HED radiography, represented as a 100-μm uranium foil; and MeV radiography, represented as a 5-mm uranium foil, each with 10% thickness variations to be resolved in a 10 x 10 grid of 3-μm pixels, with a signal-to-noise ratio of 10 in each pixel, and utilizing 30% bandwidth on the x-ray source. Very importantly, the 3-μm resolution assumed in these requirements curves is beyond state-of-the-art in current backlighter sources, but future radiography needs are anticipated to be on this order. One can see from the bottom figure, for example, that ARC Ka falls below the requirements curves for (high resolution) HED and ICF radiography. Today one would sacrifice resolution to get sufficient photons per pixel. The question raised, then, is what x-ray source(s) could provide the higher brightness needed? In answer, the blue line representing the scaled brightness from a linac-based Compton source (Gibson 2004, Gibson 2010, Albert 2010, Barty 2004, Petrillo 2012), as well as one experimental point (yellow dot) for a laser-wakefield accelerator-based Compton source (Dopp 2015). The LWFA (Tajima 1979, Siders 1996, Leemans 1996, Esarey 2009) is a laser-based means of accelerating electron bunches by utilizing charge separation waves in a plasma, with peak accelerating fields 1,000 to 10,000 times greater than in conventional (e.g. linac) accelerators. By similarly colliding the LWFA electrons with a short laser pulse (Hartemann 2007, Chen 2013, Powers 2013, Ta Phuoc 2012, Tsai 2015), very bright x-ray beams up to tens of megavolts have been produced (Shaw 2017). One of the chief advantages for LWFA-based Compton sources comes from the few-micron transverse size of the electron bunch and hence x-ray-source size. From this study, we conclude that Compton-based x-ray sources in the ~100-keV photon energy range may be sufficiently bright to act as future diagnostics for HED and ICF radiography.

The impact of the ARCHER study is two-fold. Firstly, the potential for LWFA-Compton sources to provide a higher-resolution high-energy radiography diagnostic is clear. This fact informs the laser and laser-wakefield technology efforts at Lawrence Livermore National Laboratory. The 10–100-fold gap in photons per solid-angle brightness can be closed with improvements to laser energy and LWFA performance, most notably in accelerated charge at low emittance. Secondly, the anticipated radiography performance of the laser-driven megavolt radiography capability source could have a significant impact on the national stockpile stewardship mission via flash radiography (Cunningham 2003), as well as potential application to homeland security port-scanning. The dose of this class of x-ray source that was already demonstrated (few rad at 1 m) is comparable to existing radiography tools such as Cynus (Oliver 2009, Corrow 2008) and is potentially scalable to a class of performance comparable to that of the Dual-Axis Radiographic Hydrodynamic Test Facility (Los Alamos) with increased laser energy and improvements to both targets and radiography configuration (reduced source–object distance). Importantly, the demonstrated source size of laser-based x-ray sources is significantly smaller (3 times or greater) than with linear induction accelerator sources. Further compelling factors in evaluating the future impact of laser-based x-ray sources include their rapid reconfigurability, the potential for "x-ray movies" with multiple pulses in time, and the potential for multi-view tomographic application.

Laser-driven 100-keV to multi-MeV x-ray sources have particular advantages in mission-relevant areas such as HEDS, ICF, and stockpile stewardship. Compton scattering sources, especially LWFA-based sources, have demonstrated source brightnesses sufficient for the canonical HED radiography diagnostic examined here. Further, increases of ten to one-hundredfold in brightness are needed to meet the requirements of the high-resolution ICF radiography example we examined. Laser technology research and development roadmaps at Lawrence Livermore National Laboratory presently include gap-closing pathways to address this. For thick-target radiography, we found the multi-MeV LWFA-based Compton source capable of producing high-resolution radiographs in a 5-mm U-equivalent test case though signal loss through attenuation was a concern in the context of background contributions to the image. Finally, we concluded a solid-target-based MeV x-ray source has significant potential application in large, dense-object radiography where improvements in source resolution over existing technologies are of interest. Research and development on a future laser-driven MeV radiography capability should be pursued.