Modern assessment of electromagnetic pulses is essential for developing nuclear forensic capabilities based on signals measured in the urban and space environments, predicting the propagation of pulses through the ionosphere, and establishing improved radiation-hardening standards. The essential physics involved in generating an electromagnetic pulse has long been known. The energetic gamma rays emitted by nuclear reactions propagate through the atmosphere until they interact with neutral atoms, producing ions and energetic Compton electrons. The electrons turn in the Earth's magnetic field, generating a coherent current that, via synchrotron radiation, produces a large electromagnetic signal. We will develop self-consistent, three-dimensional calculations of nuclear-driven electromagnetic pulse propagation, including detailed descriptions of the domain geometry, Compton electron motion, gamma shadowing, electron avalanche, and evolution of the background medium. We will capture previously neglected physics using new computational methods to address the shortcomings of earlier work and to incorporate recent findings, such as those indicating that the rise time computed with established one-dimensional codes is spuriously short and that gamma shadowing can increase the field amplitude, both by an order of magnitude. We will leverage the Livermore-developed WARP time-dependent plasma code framework in creating a state-of-the-art electromagnetic pulse code.

We expect that our new capability will enable us to simulate high- or low-altitude nuclear bursts, including three-dimensional geomagnetic effects and complex geometries that will be supported with the novel use of adaptive mesh refinement and with full self-consistency. The new methods and careful optimizations we develop will also afford accurate simulations of electromagnetically large problems. We will follow a stepwise approach to the development and initial exploitation of electromagnetic pulse simulations that advance the state of the art and correctly account for physical effects that have not been treated self-consistently in the classical treatments using simplified models. We are focusing on three developments that offer promise for qualitatively improved electromagnetic simulation capabilities including (1) a separation of scales to enable detailed three-dimensional simulations that are sufficiently rapid for regular use on a broad set of electromagnetic pulse scenarios, (2) a combination of adaptive mesh refinement and particle-in-cell models that offers promise for simulating a front that travels a long distance through free space before encountering an urban environment involving finer-scale structures, and (3) a pseudo-spectral solver to enable full three-dimensional propagation over distances not previously deemed practical.

Livermore's missions in national security and strategic focus area in stockpile stewardship science will be supported with this project by providing a detailed understanding of nuclear burst effects for a range of scenarios. We will advance U.S. capabilities in identifying and quantifying threats from electromagnetic pulses, assessing electromagnetic pulse applications, developing forensics based on measured pulses, and setting hardening standards. This work also furthers the Laboratory's mission of nuclear threat reduction (specifically, global monitoring and consequence management), monitoring for nuclear nonproliferation, protection of space assets, and the computational engineering associated with global security (specifically, vulnerability assessments and mitigation strategies for homeland infrastructure).

In FY16 we (1) developed and benchmarked CHAP-lite (CHAP, or code for high-altitude pulse, is a workhorse code for electromagnetic studies); (2) used our new EMPulse (electromagnetic pulse) code to compute the effect of a gamma shadow and compared it with results from CHAP-lite; (3) compared synchrotron radiation computed via finite-difference time-domain methods (a numerical analysis technique used for modeling computational electrodynamics) with Liénard–Wiechert, showing good convergence; (4) decided to implement a pseudo-spectral solver in EMPulse, as well as a relative of the Lorentz-boosted frame transformation (namely the transformation into a coordinate system wherein time is always relative to the local pulse arrival time), to develop a fast-running, three-dimensional model in spherical coordinates using either vector spherical harmonics or finite-difference time-domain or both (see figure); (5) developed a far-field prediction model to improve efficiency; and (6) assessed how well spherical harmonics capture angularly localized structures. 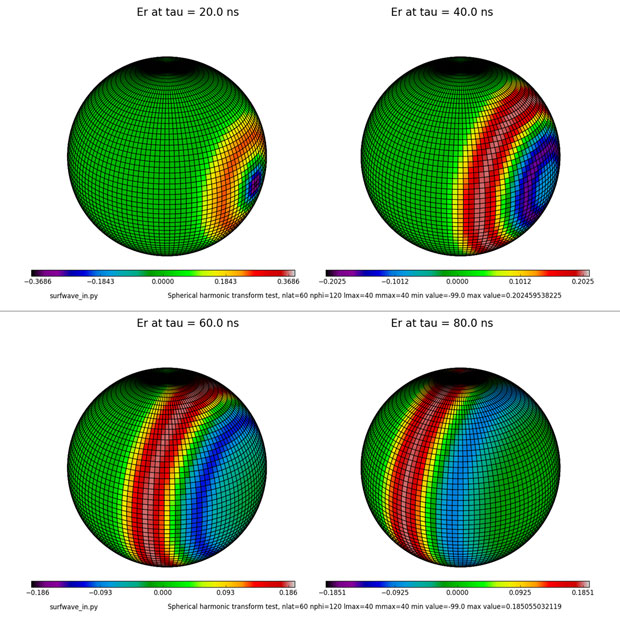 Evolution of a wave on a spherical shell, as computed using the Maxwell solver in an electromagnetic pulse computing code.