Diffraction gratings, similar to a lens or a mirror superimposed with a precise pattern of microscopic periodic structures, are used in optical elements of portable field sensors that spectrally characterize materials. Materials reflect, scatter, absorb, and emit electromagnetic radiation in ways characteristic of their molecular composition and macroscopic scale and shape. If radiation from a material is measured at many wavelengths, over a sufficiently broad spectral band, the resulting spectral signature, or simply spectrum, can be used to identify and discriminate among different classes of materials. "Hyperspectral" sensors employ hundreds of contiguous bands to identify a variety of natural and man-made materials. Currently three advanced manufacturing techniques are being considered as candidates to provide high-spectral-resolution diffraction gratings for discrimination of spectrum over a broad wavelength range of 0.35 to 15 μm. These three manufacturing techniques include: a design extension for Livermore-developed micro-mirrors to diffraction gratings, variable pitch-angle gray-scale lithography, and a metallic thin-film wrinkling technique. However, it is not clear from preliminary calculations that any of the techniques will provide the needed spectral separation performance. We plan to examine these concepts in detail with optical and mechanical models to determine their feasibility for use in a wide-band spectral characterization technology, which would enable enhanced capabilities in sensors that can spectrally characterize materials.

We expect to determine whether any of the three above-mentioned advanced grating manufacturing techniques are capable of producing a grating for use in advanced hyperspectral sensors that will increase performance as well as decrease size. Current state-of the-art ground-based sensors are 1,000 lb and unable to access all areas of interest in the field because of their large size. Often, multiple sensors are required to perform a complete characterization because each sensor is based upon a grating that can only discriminate over a specific, fixed portion of the spectrum of interest. Current gratings are solid components, unable to change their angle or pitch to alter the spectral resolution provided to the user. Some manufacturers vary the groove spacing across a solid grating to support multiple wavelengths, but such gratings suffer performance issues because of difficulties in machining them. The proposed advanced manufactured gratings would provide a new tool for sensor designers to obtain coverage of the entire spectrum of interest using a single grating. Adapting design of micro-mirrors to diffraction gratings, metallic thin-film wrinkling, and variable pitch-angle gray-scale lithography provide the capability to alter the blaze, or facet angle of a grating, to achieve maximum grating efficiency in a given diffraction order; alter the pitch; or control both, respectively. For each of these advanced manufacturing techniques, we will identify the pros and cons associated with that technique, or possibly determine that none of these techniques are feasible methods to produce the requisite diffraction grating.

Advances in diffraction grating technology will benefit ground-based sensors with applications in intelligence and monitoring. In addition, there is a need within the intelligence community for a compact, broad-wavelength-range hyperspectral sensor. Current state-of the-art ground-based sensors are heavy and too large to maneuver into tight spaces of interest. Current sensors are also incapable of making measurements over wide wavelength ranges on a single line of sight. New techniques to create improved diffraction gratings for greater range and allow for more compact sensors benefits the Laboratory's strategic focus area in cyber security, space, and intelligence. Improved manufacturing techniques likewise support the core competency in advanced materials and manufacturing.

For FY15 we considered three techniques to produce a diffraction grating, including adapting LLNL micro-mirrors, wrinkled thin films, and gray-scale lithography. Specifically, we determined that (1) producing an adjustable diffraction grating using micro-mirrors was not feasible because of challenges with the geometry of the required mirror facet; (2) using gray-scale lithography showed promise, although producing features sharp enough for an efficient grating requires further studies; and (3) using gold-coated wrinkled thin films is feasible (see figure), and because of their ease of manufacture, we were able to test the films in our laboratory. We measured the pitch of the wrinkled-film grating and found that the measurement matches the predicted wrinkled-film pitch to within 10%. 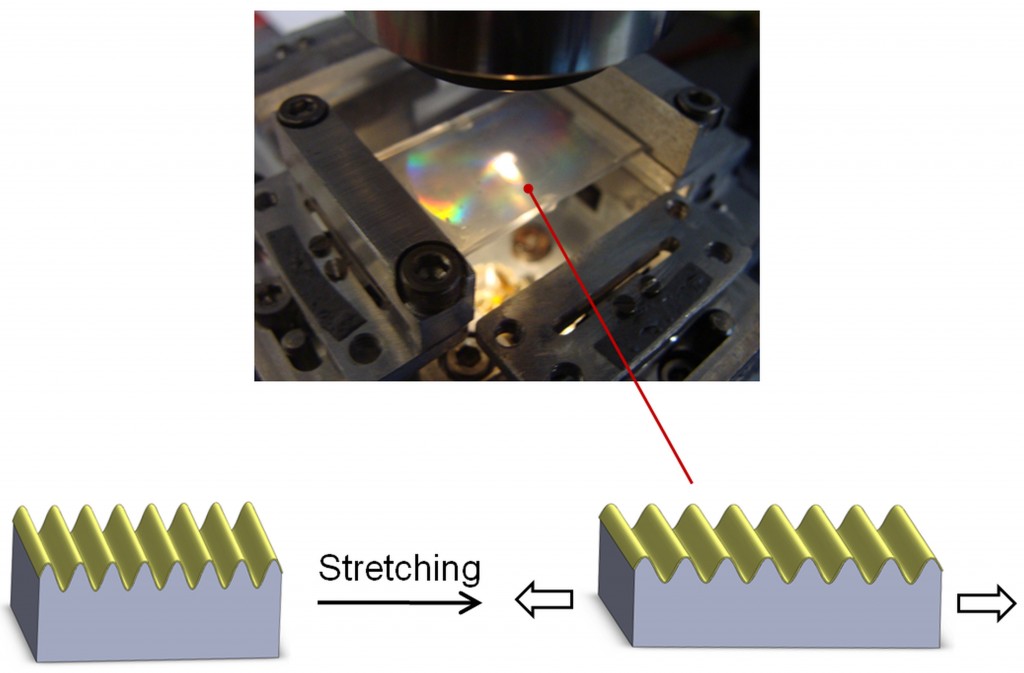