In this project, we developed a novel high-energy, high-repetition-rate laser capable of exploring optical materials behavior and optical damage testing for extremely long exposures. The amplifier stores enough pump energy to support approximately 10 J of laser output and employs conduction cooling for thermal management to avoid the need for expensive and bulky high-pressure helium sub-systems. A prototype amplifier was fabricated, pumped with diode light at 885 nm, and characterized. Experimental results showed that the amplifier provides sufficient small-signal gain and sufficiently low wave-front and birefringence impairments to prove useful in laser systems at repetition rates up to 60 Hz.

Enhanced understanding of laser-induced optical damage phenomena has historically been a key enabler for development of high-energy laser systems because their output energy is ultimately limited by the ability of their component materials to withstand high-pulse laser energy. Almost no information on laser damage above 10 Hz over billions of pulses (giga-shots) is available. For example, small flaws that do not grow over exposures to a relatively small number of pulses might grow over a larger number of shots and thus impose unforeseen limits on operating conditions. Pulsed, high-energy lasers operating at high repetition rates are important tools for scientific exploration and materials processing. Science applications include the study of laser damage1 and particle–photon interactions in accelerator end stations. Processing applications include laser peening and potential use in sample preparation for nuclear forensics.2,3 All these applications benefit from operation at higher pulse-repetition frequencies, which enable higher throughput and the ability to conduct experiments over long exposure times as measured in giga-shots. However, the heat load on the laser amplifier also increases with increasing pulse-repetition frequency and average laser power. As a result, aggressive thermal management of heat extracted from the faces of amplifier slabs is required to avoid heat-induced degradations in the laser amplifier. Current state-of-the-art lasers of this type operate at 10-Hz pulse-repetition frequency and employ a high-speed flow of pressurized helium gas to cool the amplifier head.4–6 The infrastructure to support this cooling mechanism is expensive and bulky, reducing the attractiveness of such lasers for many applications.

Our objective with this project was to explore a novel amplifier concept for high-energy laser amplifiers operating well above 10 Hz. The concept employed pumping the amplifier gain medium at an unconventional wavelength (885 nm for a neodymium-doped yttrium–aluminium garnet laser, which involves significantly lower absorption than the conventional 808-nm band), and using a conduction method of face cooling of the amplifier slabs (rather than convective gas cooling) to avoid the issues associated with convective helium cooling. The specific questions to be addressed were

These objectives were met by fabricating and characterizing a prototype amplifier at repetition rates up to 60 Hz.

The following steps were taken to determine whether such an approach could provide a practical laser amplifier. A laser amplifier was designed using a one-dimensional laser performance model. The amplifier was designed to support an 18-J output, consistent with the needs of many scientific and industrial applications. The resulting design was a four-pass, angularly multiplexed system utilizing eight neodymium-doped yttrium–aluminum garnet slabs and a clear aperture of 28 mm2. The design includes a quartz rotator and phase plates within the yttrium–aluminum garnet slabs to enable birefringence7 and wave-front correction. The amplifier is pumped at 885 nm wavelength to minimize thermal loading by reducing the quantum defect.

A detailed design was generated for the conductively face-cooled amplifier elements, which consist of pairs of neodymium-doped yttrium–aluminum garnet slabs with sapphire cooling blocks. Finite-element analysis was used to assess the thermo-mechanical performance (temperature and stress fields), and custom software to relate this performance to optical wave-front and birefringence impairments. A three-dimensional propagation simulation was used to assess the overall impact of these impairments on the laser system. Monte-Carlo ray tracing was used to assess the degree of transverse, parasitic amplification in the slabs and to set specifications on the absorbing edge cladding.

Detailed designs were created for the diode lasers used to pump the slabs and for the optics needed to homogenize and deliver pump light to the yttrium–aluminum garnet. The final design employed two diode arrays, each delivering 126-kW peak power into a square pump distribution of 30 mm.

The diode arrays and pump delivery optics were fabricated and deployed.8,9 The arrays delivered 300-ms pulses of 126-kW peak power at up to 120-Hz pulse-repetition frequency at their peak current drive (315 A). Their spectrum was centered at 885 nm, with 95% of the power contained within an approximately 4-nm bandwidth (<60 Hz). At 120 Hz, the 95%-power bandwidth was 6.5 nm. Figure 1 shows a diode array in operation. 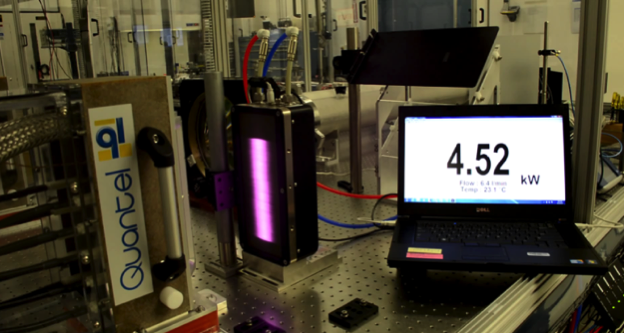 Amplifier head elements were fabricated and deployed. Ceramic neodymium-doped yttrium–aluminum garnet slabs were fabricated in a sintering process. The amplifier medium was a 48-mm-diameter disk, with an absorbing samarium-doped yttrium–aluminum garnet cladding around its perimeter (see Figure 2). The baseline approach for thermal coupling involved diffusion-bonding to minimize thermal resistance at the interface of the sapphire with the yttrium–aluminum garnet. While such bonding was successfully demonstrated on small (1-in.) samples, polishing the final sapphire articles to the required smoothness for this bonding was not achievable on the timescale of this project. This delay was driven by an unanticipated upsurge in the commercial demand for sapphire during the middle of this project. For this reason, thermal coupling to the sapphire was achieved using proximity coupling. A thin (10-mm) gap filled with static, atmospheric pressure gas was used for thermal transport to the sapphire.

Finally, amplifier elements were characterized by measuring their temperature and optical characteristics. The temperature profile of the yttrium–aluminum garnet surface was measured with a calibrated infrared camera. Yttrium–aluminum garnet-doping densities were measured with absorption spectroscopy. The optical behavior was characterized by measuring small-signal gain, wave front, and birefringence using a 10-ns probe pulse at 1,064 nm. The probe size at the amplifiers was a square with 25-mm edge length (full width at half maximum). A fast photodiode was used to monitor the neodymium-doped yttrium–aluminum garnet fluorescence as a diagnostic of parasitic amplification processes.

The measured pump absorption using four amplifier elements and single-sided pumping was 88 to 90%, depending on which diode array was used. The absorption was essentially independent of pulse-repetition frequency and was close to the 90 to 92% values calculated from measured spectra for the diodes and slabs.

The temperature profile on a slab nearest the pump illumination is shown in Figure 3. The profile shows a central hot zone caused by the quantum defect in the pump-illuminated area, and an annular hot zone caused by absorption in the edge cladding. At 60-Hz pulse-repetition frequency, the maximum temperature in the pumped region was 107 or 122°C and edge cladding temperatures were 100 or 103°C, depending on which pump array was employed. The dependence on pump array is because of differences in the pump delivery efficiency for each array. These experimental data are in reasonable agreement with thermal simulations based on the heat loads established from laser energetics models, which predict a similar profile and 112°C peak temperature at 60 Hz.

The measured gain for a single amplifier element pumped by a single diode array was 1.92 to 1.99 at pulse-repetition frequencies less than 40 Hz and 1.78 at 60 Hz. These values are slightly lower than the 2.37 gain expected from energetics simulations of the original design. The difference can be attributed to a 15% reduction in stored excited state energy, which is primarily because of reduced pump absorption associated with slightly higher losses in the pump delivery optics. The fluorescence temporal response at pulse-repetition frequencies less than 2 Hz exhibited some gain clamping, suggesting the onset of in-plane parasitic processes. This signature disappeared for pulse-repetition frequencies greater than 20 Hz, presumably because of a reduced emission cross section from increased slab heating.10

Figure 4 shows the gain of four elements with two-sided pumping. Data and simulations are in reasonable agreement for pulse-repetition frequencies less than 40 Hz. The slow gain decrease with pulse-repetition frequency is because of thermal variations in emission cross-section.10 The lower gain at 60 Hz, which was not expected based on data for a single element, may result from imbalances in pump absorption between the two diode arrays, which detunes the gain peak of half the amplifier elements. This should be easily corrected by adjusting the diode current. Energetics simulations show that the measured gain (10.8) at 40 Hz is sufficient for 11-J laser pulse energy, using 11-mJ seed energy. 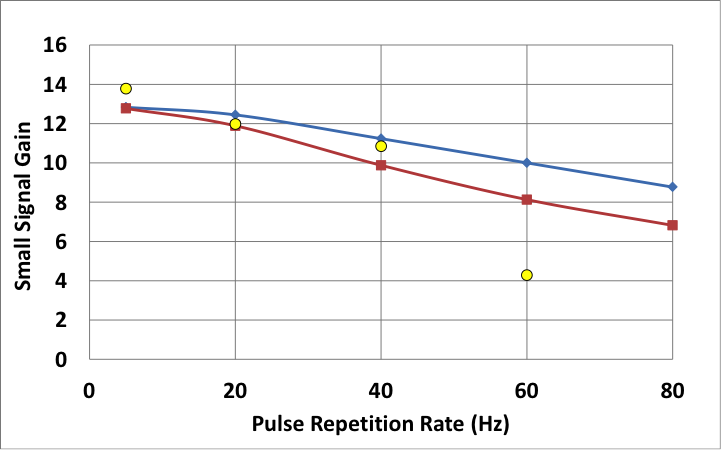 The thermal wave-front aberration of four elements with single-sided pumping was measured to be 17.2 waves at 60 Hz, over our probe aperture. Figure 5 shows that the aberration is mostly optical power, and shows the thermal lens focal length. Because most of the pump light is absorbed in the first two elements, two-sided pumping should create a roughly 34-wave distortion. While simulations suggest a somewhat smaller distortion of 27 waves for two-sided pumping, the observed aberrations should be correctable with a phase plate.

The thermal birefringence profile of a pair of amplifier elements was measured under single-sided pumping. The data show the typical pattern, with depolarization initiating in the aperture corners and increasing with pulse-repetition frequency.7 We reached 100% depolarization in the corners at 40 Hz. These results are consistent with simulated behavior.

A surprising discovery was made involving diode-on-diode effects in the two-sided pumping geometry. The spectrum of each array was significantly distorted by transmission through the amplifier elements (as expected), due to the peaked absorption spectrum of the neodymium-doped yttrium–aluminum garnet. When pumping from both sides, roughly 6% of the light from one pump array impinged upon the second array. This illumination unexpectedly resulted in significant distortion of the pump spectrum prior to transmission through the amplifier. While this effect did not prevent our demonstrating the performance described above, it likely resulted in some loss of amplifier performance, and may be a concern for long-term diode reliability. It can be mitigated in future work by insertion of appropriate optics in the pump delivery beam path.

We designed, simulated, fabricated, and characterized a novel amplifier element to enable scaling pulsed lasers to higher average power using a face-cooled architecture employing conductive cooling. The measured performance is in reasonable agreement with simulations. Our results suggest that this approach is suitable for an amplifier producing 10 J at 40 Hz, with possible scalability to higher repetition rates.

Our research will enable the design of reliable lasers with higher-energy pulses for next-generation systems important to the Laboratory and in support of the core competency in lasers and optical materials science and technology. These include the use of high-energy pulsed lasers for scientific exploration in high-energy-density science, instrumentation for gamma-ray sources and accelerators, defense and security applications such as space debris clearing, and for inertial fusion energy drivers. Such laser systems are also of interest for industrial materials processing such as laser peening and high-velocity laser-assisted deposition.

The giga-shot optical laser demonstrator amplifier elements developed for this project exhibited suitable optical performance for high-energy lasers operating at repetition rates up to 40 Hz. The next step for this technology is use in a laser system. The developed amplifier provides a new approach for the thermal management of pulsed lasers operating at high repetition rates that will facilitate scientific exploration at the Laboratory in the areas of (1) optical damage mechanisms, which ultimately can improve the performance of the National Ignition Facility;1 (2) laser–metal interactions, with applications to industrial materials processing2 and, potentially, directed energy application for defense;11 and (3) laser-enhanced dissolution of solids for chemical analysis, with application to nuclear forensics.3 Use of the amplifier will enable extremely capable pulsed laser systems for (1) x-ray and gamma-ray sources based on Compton scattering, which have been proposed for nuclear assays, detection of nuclear material, and medical applications;12 (2) high-energy-density physics studies, including in accelerator end-stations used for scientific exploration; and (3) industrial and commercial processing of materials.

Several potential sponsors have expressed interest in the giga-shot optical laser demonstrator system as a source for industrial materials processing of metals and semiconductors. Discussions of this approach are underway with two potential industrial partners.