Work performed during this project improved the multiscale and high-resolution modeling capabilities of the widely used Weather Research and Forecasting model. Model improvements extended the capabilities of the model, allowing for high-resolution simulations of atmospheric flow over complex terrain, which were previously impossible. Our research generated comparisons of simulation results to observations from the Bolund, MATERHORN, and Terrain-Induced Rotor experiments, all field campaigns focused on understanding complex atmospheric flows. Additionally, improvements were made to the multiscale modeling capabilities of the Weather Research and Forecasting model through the development of a more flexible approach to computational gridding. These model developments collectively improve the accuracy of the atmospheric simulations and allow the model to be applied at high-resolutions previously prohibited by model limitations. This work has been applied to several important problems, such as those in wind energy and atmospheric transport and dispersion.

Work for this project focused on improving multiscale atmospheric simulations through two scientific developments. The first is developing atmospheric models originally designed for weather forecasting to more accurately simulate smaller local scales. The second is developing a framework that effectively passes information between scales (i.e., from larger weather scales to smaller local scales). Model developments to address these two issues were completed during this project, through improvements to the Weather Research and Forecasting model. This model is a widely used weather forecasting model made publically available by the National Center for Atmospheric Research. Where appropriate, model developments from this LDRD were contributed back to the public Weather Research and Forecasting repository at the center.

Figure 1 shows a simulation of the Bolund Experiment, the field campaign chosen for evaluation of the new immersed boundary condition. This field campaign consisted of measurements over a small isolated landform, which includes a steep cliff-like western edge, and is surrounded by water. Flow in this simulation is from the southwest direction. 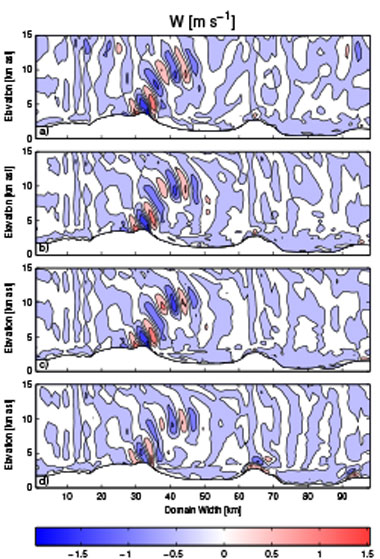 Simulation results are compared to observations in Figure 2, which shows the speed-up ratio, velocity normalized by the upstream velocity, at 2 and 5 m above the ground level as the flow passes over the topography. Although it is not obvious from Figure 2 because the depiction of normalized velocities, the new boundary condition improved comparisons against observations significantly, reducing model error by as much as 50%, including errors in the upstream flow condition. The new boundary condition also improved the representation of separated flow on the lee side of the hill, which is notoriously difficult to simulate correctly. 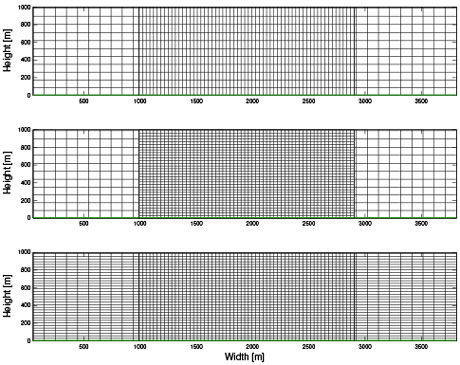 Figure 2. Speed-up ratio at heights of 5 m (top) and 2 m (middle) above ground level are shown for the no-slip boundary condition (black line) and the new “velocity reconstruction” method (blue line). Observations for the two heights are shown as red circles. A profile of the Bolund topography is shown in blue (bottom).

Additionally, weather forecasting models include parameterized models for physical processes such as radiation, microphysics, and surface energy budgets. Several of these physics parameterizations were modified to work with the immersed boundary method. Inclusion of these physical processes allows for realistic atmospheric simulations beyond what typical computational fluid mechanics codes can achieve. Simulations shown in Figure 3, which are very high-resolution simulations over complex terrain including atmospheric physics, are the first of their kind.

The inclusion of atmospheric processes was validated through simulation of an intense observation period from the MATERHORN field campaign and comparison to the observations. This field campaign took place at Dugway Proving Grounds in Utah at Granite Mountain. Figure 3 shows a west-looking view of the MATERHORN topography along with blue isocontours of downslope flow. Topographic shading was one physical process coupled to the immersed boundary, and shaded ground surfaces are shown as such in Figure 3. This is a simulation of the evening transition, when the sun sets to the west, and east-facing slopes of the mountain become shaded. Topographic shading cools the terrain surface and the near-surface atmosphere, leading the air to become denser, and to the down-slope flows simulated here.

Figure 3. View of downslope flow on the east side of Granite Mountain during the evening transition. Blue isosurfaces are shown for downslope velocity. The locations of observational towers are shown as green dots. (Figure from Arthur et al., 2016).

Use of the immersed boundary method and atmospheric physics models greatly enhanced our ability to simulate atmospheric flows at local scales. These flows, however, interact with larger atmospheric scales, and therefore it is necessary to improve the framework in the model for multiscale modeling. The model uses grid nesting, shown in Figure 4, which allows for grid refinement in geographic regions of interest. Figure 4 shows a typical two-domain set-up, where the finer inner domain is shown interior to the coarser outer domain appearing on either side.

Historically, grid refinement was limited to the horizontal dimensions in the Weather Research and Forecasting model, and a common vertical grid was used on all of the domains. As multiscale modeling has emerged, so has the need for vertical refinement between domains or grids. As part of this project, a vertical grid nesting capability was implemented and validated for the Weather Research and Forecasting model. This feature has been added to the public release of the code, and has found users both within and outside of the DOE. Figure 4 depicts three computational grid set-ups used to test our vertical nesting capability. The top and bottom grids are control cases, which do not use vertical nesting (i.e., the vertical grid is common between the outer and inner domains), but have coarse and fine vertical grid spacing, respectively. The middle computational grid has refinement in both the horizontal and vertical dimensions. 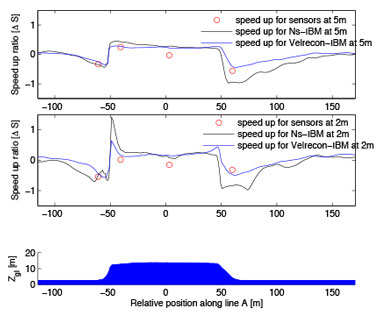 The vertical grid nesting feature was tested by using the grid set-ups shown in Figure 4 and comparing model results with vertical nesting against control simulations. Validation cases were published for both high-resolution large-eddy simulations and coarser mesoscale simulations.

In our mesoscale test cases, shown in Figure 5, comparisons against observations were made for the Terrain-Induced Rotor Experiment, a field experiment that took place in the Owens Valley of California, located between the Sierra Nevada and Inyo mountain ranges. Vertical grid nesting validated well, as shown in Figure 5 for flow over the Owens Valley, and was shown to improve the multiscale modeling capabilities of the Weather Research and Forecasting model by reducing model error through domain-specific grid optimization. 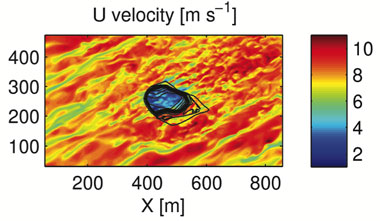 High-resolution simulations of atmospheric flow are critical for multiple program areas including wind energy, assessments of hazardous releases by the National Atmospheric Release Advisory Center, and intelligence assessments. This project improved the Laboratory’s capabilities for simulating atmospheric flow, especially over complex terrain, using the Weather Research and Forecasting model. Several projects will follow directly or benefit significantly from the outcomes of this LDRD. First, the Laboratory wind program has received funding from the U.S. DOE Office of Energy Efficiency and Renewable Energy to continue development of the Weather Research and Forecasting model for improved multiscale atmospheric simulation. This funding is a direct outcome of scientific progress enabled by this LDRD, and includes follow-on work to that accomplished with our project. Second, the National Atmospheric Release Advisory Center received funding for atmospheric modeling on the Low Yield Nuclear Explosion Monitoring project, partially based on our capabilities and expertise in modeling flow over complex terrain. Third, as the center continues to integrate the model more fully into research and operations, the center’s customers benefit from improved atmospheric modeling capabilities. The center’s products range from forecasting for hazardous atmospheric releases to inverse modeling for source attribution. Three hires resulted from this LDRD, including two post-doctoral researchers and a Lawrence Scholar (formerly a graduate student subcontractor on this project).

Improvements for multiscale and high-resolution modeling were made to the Weather Research and Forecasting model during this LDRD. These improvements focused on enabling and improving large-eddy simulations, where resolution is adequate for partially resolving turbulence. The FY17 funding from the Office of Energy Efficiency and Renewable Energy Wind Office focuses on extending these model improvements to coarser simulations where turbulence is fully modeled, rather than resolved. Coarser simulations demand fewer computational resources, and are used operationally by weather forecasters and wind energy companies.