X-ray source development at Lawrence Livermore National Laboratory's National Ignition Facility (NIF) focuses on generating high-fluence radiation with controllable photon energies and spectra. Such x-ray sources constitute an extreme radiation environment and are uniquely useful for materials testing and code validation, with additional applications in biomedical, astrophysical, and inertial confinement fusion research. A major thrust of the program is achieving high-fluence x-ray emission with energies above 30 keV, a regime difficult to efficiently produce with current NIF efforts or pulsed power facilities. While NIF can generate more than 10 kJ of 20-keV x-ray line radiation, it is not capable of generating the plasma required for the most efficient emission with higher-fluence elements.

Our goal was to generate high-photon-energy x rays following a three-stage process: (1) laser conversion to plasma waves via instabilities, (2) plasma wave breaking to accelerate production of hot electrons, and (3) electron conversion to high-photon-energy x rays in a high-fluence converter (i.e., the target hohlraum wall). Initial calculations indicated that optimizing these three processes could result in a useful 30-keV x-ray source for materials testing on NIF, enabling simulation code validation in this regime for the first time. The results obtained from subsequent simulations and a research campaign using the Omega Laser Facility also indicate that our proposed high-photon-energy x-ray source platform would directly benefit national security applications by filling a critical gap in the capability to test materials effects in extreme radiation environments.

X-ray source development and the requisite understanding of x-ray interactions with matter leads to applications in material testing and code validation in extreme environments (Elton et al. 1993), biomedical research (Neutze et al. 2000), the study of radiation-dominated astrophysical phenomena (Olbert et al. 2001), and inertial confinement fusion (Dewald et al. 2008). The goal of our project was to fill a critical gap in the spectral range for which high-fluence x rays can be produced for national security and other applications (Ware et al. 2002). Our experimental campaign centered on investigating target fills and laser–plasma conditions on the Omega Laser Facility to study instability control and culminate in an eventual design for a high-fluence x-ray source on NIF. Experiments on the Omega 60 laser facility utilized 40 beams incident into gold hohlraums (2.7 mm long, 1.6 mm diameter, 1.2 mm diameter entrance aperture, 25 μm wall thickness) with up to 480 J/beam of λ = 0.351 μm light. Primary diagnostics included those used to investigate the x-ray flux with spatial, temporal, and spectral resolution and to diagnose the Raman and Brillouin backscatter in energy, spectrum, and time.

To investigate the appropriate plasma conditions for backscatter and x-ray generation, several different hohlraum fills were used: one set was composed of either SiO 2 or CH 2 foam; another set had 10 μm of parylene-N (CH) lining the inner wall, ablated by a pre-pulse with variable time delay before main laser drive arrival; and a third set had a high-density C 5 H 12 gas fill. Hydrodynamic simulations were performed to judge the optimum range of delays between the pre-pulse and drive pulse for filling the hohlraum with the desired plasma density.

The primary observation was a 10-fold increase in 50-keV x rays on the hard x-ray detector compared to previous direct-drive Omega shots for both the foam-filled and CH-lined targets. Gas-filled hohlraums produced copious amounts of lower energy x rays but nothing in the desired high-energy range; however, they served as critical comparisons to historical data on the facility. Analysis of the backscattered light diagnostics revealed that while the CH-lined targets exhibited the most stimulated raman scatter (SRS) backscatter, it was the foam-filled CH targets that had the highest x-ray signals, an inverse relationship that ran counter to our initial expectations. Hohlraums with CH inner linings emitted the hardest x rays late in the drive pulse. By comparison, the foam-filled targets generated all energies of x rays early in time before any backscatter occurred. These Omega campaign results were used to develop a plan for a shot day on NIF. These initial shots were not at full NIF energy (to assess any damaging laser backscatter that may occur during the interaction) but were still substantially higher than the Omega versions, using all 192 beams for a total of 500,000 J of laser energy (see figure). Both the CH-lined and foam-filled variants were tested during the shot series, and both hard x-ray and instability backscatter were observed. 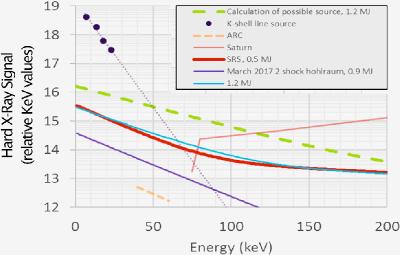 Neither the pulsed-power shots nor the NIF Advanced Radiograph Capability shots achieved high fluence in the >50-keV range. The best 1.2-MJ NIF x-ray spectrum is shown by the bright blue line in the figure. The conservative goal of this effort was the green dashed line in the figure, with more than one order of magnitude of improvement at 75 keV. Results from 500-kJ NIF shots are shown compared to existing x-ray sources, producing yields similar to those of the previous highest NIF hard x-ray signal while using only 40 percent of the energy. Full-energy shots and further target optimizations suggest that the desired yields (see figure, green dashed line ) are within reach.

The foam-filled hohlraums performed significantly better than the CH-lined hohlraums with or without a pre-pulse, corroborating previous results in different plasma regimes that indicated the NIF plasma environment favored two-plasmon decay instability compared to Omega conditions. Furthermore, the timing of the backscatter indicated maximum x-ray emission occurred within the first 2 ns of the 4-ns pulse, which was chosen to mimic the initial parameters of other x-ray sources and which allows subsequent tests to use a shorter pulse with higher beam power without increasing the chance of optics damage. These scaled tests also showed no deleterious backscatter growth, indicating that full-scale shots are of no danger to the optical systems. The next phase of full-power shots with upgraded targets have been scheduled for fiscal year 2019.

Our research supports the advancement of the science, technology, and engineering competencies that are the foundation of the NNSA mission. Our research also addresses the Laboratory's research and development challenge in directed energy and supports the Laboratory's core competency in high-energy-density science. Full realization of this high-photon-energy x-ray source platform would directly address national security requirements by filling a critical gap in the capability to test materials effects in extreme radiation environments. While more source development is expected in upcoming NIF shots, early successes and the absence of any other source in this photon energy range have encouraged collaborators at the Laboratory to provide samples and diagnostics to be used for material tests on upcoming NIF shots.

Both Omega and NIF shots were performed as part of this project. Major highlights include a successful demonstration of a 10-fold increase in hard x-ray yield in the >50-keV regime over typical shots on the Omega facility, as well as control of dominant laser–plasma instability via the hohlraum fill. The subsequent NIF test at scaled energy matched the previous record for hard x-ray production on NIF while using only 40 percent of the energy of those earlier shots, making it the most efficient hard x-ray source implemented on NIF to date.

X-ray source development continues to be an active area of research. Future research will include the development of novel target designs to further optimize conditions (and perhaps to achieve a more directional x-ray source) in an effort to increase the photon energy from which an even higher fluence can be produced.