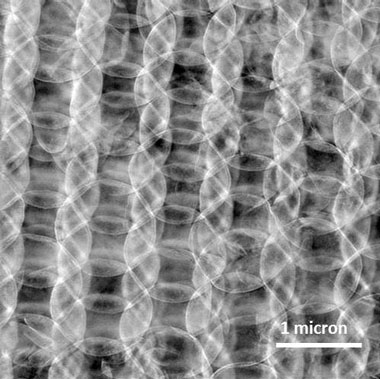 We are exploring the feasibility of coating three-dimensional objects with thin, uniform low-density foam layers with deterministically controlled density and composition by using a combination of electrophoretic deposition and atomic layer deposition. In electrophoretic deposition, charged colloidal particles in aqueous or nonaqueous solutions are directed to and deposited on a conductive electrode by applying an electric field in a liquid medium. A major challenge is fabricating films that can serve as templates for foam layers on complex three-dimensional surfaces that meet the density and uniformity required by high-energy-density physics experiments. Atomic layer deposition is a method in which a film is grown on a substrate by exposing its surface to alternate gaseous species added in sequential pulses. The method’s self-limiting character is uniquely suited to deposit uniform and conformal coatings with atomic-scale thickness control on ultrahigh-aspect-ratio substrates. The ideal conformal coating conforms to the contours of the surface with uniform thickness. Our feasibility goal is to demonstrate the fabrication of approximately 200-µm-thick, sub-50 mg/cm3 porous coatings on the inside of a hollow cylinder. The results will be directly applicable to a broad range of high-energy-density physics experiments—for example, increasing the efficiency and uniformity of the soft x-ray drive generated in hohlraum target capsules of inertial confinement and high-energy-density physics targets at Livermore’s National Ignition Facility.

A successful outcome will result in determining the feasibility of the electrophoretic deposition approach for producing conformal low-density foams on three-dimensional objects. We will pursue our goal using electrophoretic deposition to fabricate a uniform film of polystyrene beads on a three-dimensional substrate, then deposit nanometer-thick conformal coatings on the polystyrene film by atomic layer deposition. We will remove the sacrificial polystyrene bead template by chemical dissolution and thermal decomposition. Once coated, the polystyrene beads can be removed either chemically or thermally to yield low-density foam structures with cell and pore sizes that correspond to the dimensions of the polystyrene beads. The density of the resulting porous film can thus be deterministically controlled by both the thickness of the atomic layer deposition coating and the diameter of the polystyrene beads. Graded-density foam layers can also be realized using this approach by fabricating a multilayer template using different polystyrene bead sizes. If feasible, we expect that this technique can greatly facilitate the fabrication and tooling-free integration of uniform foam coatings on three-dimensional objects, eliminating the need for expensive, low-throughput, high-precision machining, while also potentially expanding the compositional and density range of foams that can be utilized in complex laser target designs.

In FY16 we (1) identified polystyrene types that withstand atomic layer deposition conditions and can be removed by heat or an organic solvent, (2) coated bulk pieces of the agglomerated polystyrene beads with aluminum oxide atomic layer deposition (see figure), and (3) successfully removed the beads to create aluminum oxide foam that is monolithic, crack-free, and low-density (~50 mg/cm3).