Implosion of targets at the National Ignition Facility at Lawrence Livermore allows access to previously inaccessible regions of high-density and temperature phases coupled with high neutron fluences. These new regimes can provide a wealth of information on high-energy-density physics and the neutron activation of atomic species. High-atomic-number species, such as xenon, are of particular interest because of their use in post-detonation nuclear forensics and global atmospheric monitoring. The goal of this project is to design and qualify a platform geared specifically to study the neutron activation of radioisotopes at the National Ignition Facility. The initial platform qualification will occur with isotopes of xenon selected to potentially provide the first experimental measurement of electron-mediated nuclear and plasma interactions. The subsequent shot series will measure xenon neutron-activation ratios in two different implosion regimes, where the neutron yield is dominated by shock production or where both shock and compression contribute.

A successful outcome of this project will include an assessment of nuclear–plasma interaction effects in a high-energy-density plasma formed by imploding a laser target, as well as a comparison between neutron production in a shock-dominated system with a shock and a compression system. Furthermore, activation of atmospheric xenon by a source of prompt, fast neutrons will be measured, and the resulting isotopic species ratios will be quantified and compared with previous research, with a goal of reducing uncertainties introduced by previously utilized measurement techniques. This project is also anticipated to qualify and characterize a new species-activation platform for future expanded studies at the National Ignition Facility. At the conclusion of this project, we anticipate that a high-atomic-number, doped indirect-drive platform with the necessary diagnostics will be well characterized for follow-on experiments utilizing alternate high-atomic-number species undertaken by programmatic research efforts.

This research addresses the challenge of experimentally observing nuclear–plasma interactions, which can cause significant changes in high-energy-density plasmas found in nuclear weapons tests and astrophysical settings. This will be accomplished using a novel neutron activation target platform for the National Ignition Facility to induce these interactions on highly excited nuclear states during implosion. The effort is directly aligned with LLNL's strategic focus area in stockpile stewardship science, which requires new approaches for probing nuclear–plasma interactions to better understand boost physics in weapons.

In FY15 we (1) determined xenon isotope and fielding temperature requirements to avoid xenon freeze while maximizing deuterium–tritium density; (2) redesigned the solid radiochemical collector holder with a new gas cell to substantially increase xenon volume (a hundredfold) that can be fielded (see figure); (3) performed calculations of the new gas cell to determine expected neutron downscatter, using the Monte Carlo n-particle transport code, which simulates nuclear processes by relying on repeated random sampling to compute results; (4) developed a simulation database with a matrix of xenon percentages and deuterium–tritium gas densities; and (5) calculated the xenon spectroscopic output of the new database and the LLNL Nova laser system data set. 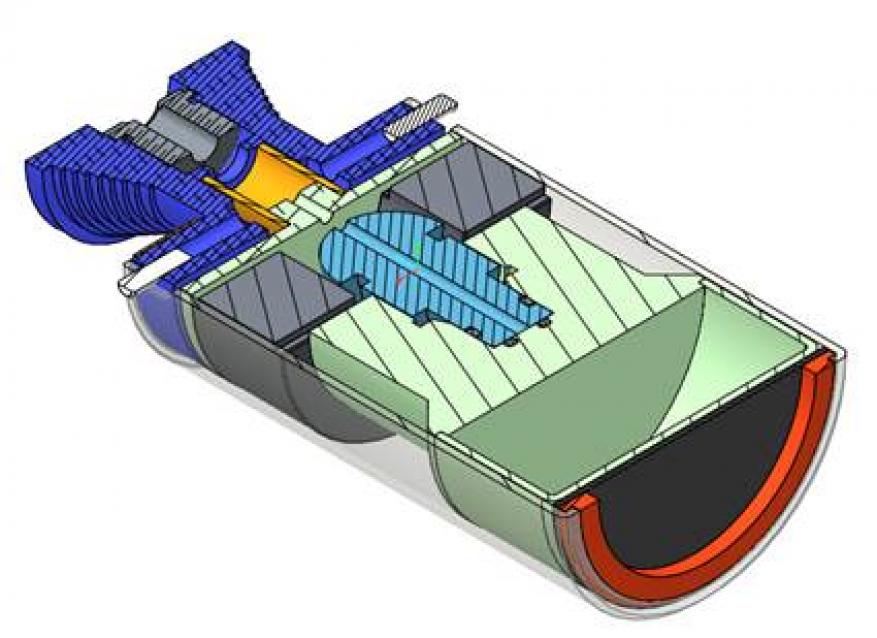 Model (slice) of the in-chamber recoverable gas cell, a new diagnostic capability for Livermore's National Ignition Facility that we have designed, fabricated, and qualified.