Our project focused on addressing a fundamental problem in the material science community regarding the kinetics of multicomponent materials, that is, their time-dependent approach to equilibrium at extreme conditions. In particular, we strove to understand whether or not there is time to observe chemical segregation during the melting and solidification processes at the nanosecond and microsecond timescales. The results of our research have broad applications in planetary science and the habitability of exoplanets, high-pressure condensed matter physics, and high-energy-density science at Lawrence Livermore National Laboratory.

Melting and freezing cause tremendous and fundamental changes in a material’s response to external forces. For multicomponent materials, the dynamic process of crossing the melting transition can drive rapid chemical separation between the solid and liquid phases, leading to untoward hydrodynamic behavior. Equation of state and strength modeling are difficult for multicomponent materials as the melting temperature can change by hundreds of degrees with even slight changes in the relative composition. Despite these complications, many Laboratory applications, from nuclear threat reduction to stockpile stewardship, now require an in-depth understanding of alloys and compounds at extreme pressures and temperatures. Similar issues face planetary scientists in their search for habitable planets, and although the materials differ, the physics do not.

While the potential physical phenomena associated with melting and solidification of multicomponent materials are numerous and scientifically interesting, our project focused on addressing the most practical question: Is there time to observe chemical separation as a material crosses the melt curve during solid–solid phase transitions, melting, and solidification?

Through the use of advanced diagnostics, we were able to evaluate our hypothesis and show that even on the nanosecond timescale, there is sufficient time to observe chemical segregation. We found that as long as there is a small volume fraction of liquid within the material, which increases ionic diffusivity by orders of magnitude, a material can reach its equilibrium thermodynamic state as it crosses the melting transition. Conversely, we also found that there is insufficient time for solid-state chemical reactions to occur in ceramic compounds on even the microsecond timescale.

Our goal was to study the dynamic response of a subset of multicomponent materials on a wide range of timescales and evaluate whether they could reach thermodynamic equilibrium at extreme pressure and temperature conditions. This effort strongly leveraged the experimental developments made by the high-pressure research groups at Lawrence Livermore in developing in-situ x-ray diffraction on multiple high-pressure platforms. By studying the dynamic compression response of materials using in-situ x-ray diffraction on the laser-driven compression platform and the gas-gun platform, we were able to investigate the material response on the nanosecond and microsecond timescales, which allows us to test our hypothesis about the kinetics of chemical segregation during solid–solid phase transitions, melting, and solidification.

We investigated the dynamics of chemical segregation in iron silicide and forsterite, materials that are of great importance to the planetary science community for understanding the thermal evolution of the Earth and exoplanets. They are also materials that are relatively well understood under static conditions at high pressures (Fischer 2013, 2014; Mosenfelder 2007; de Koker 2013). Figure 1 presents a characteristic multicomponent phase diagram for forsterite (Mg2SiO4) in the 125–250 GPa pressure range. From this phase diagram, one can see that if the forsterite is shocked to a state below the eutectic temperature, the forsterite should become a mixture of periclase (MgO) and post-perovskite (MgSiO3). If shocked above the eutectic temperature but below the liquidus, the forsterite should form a mixture of MgO and a silica-rich liquid. If the forsterite is shocked to a temperature above the liquidus, it will become a single component liquid of composition Mg2SiO4. 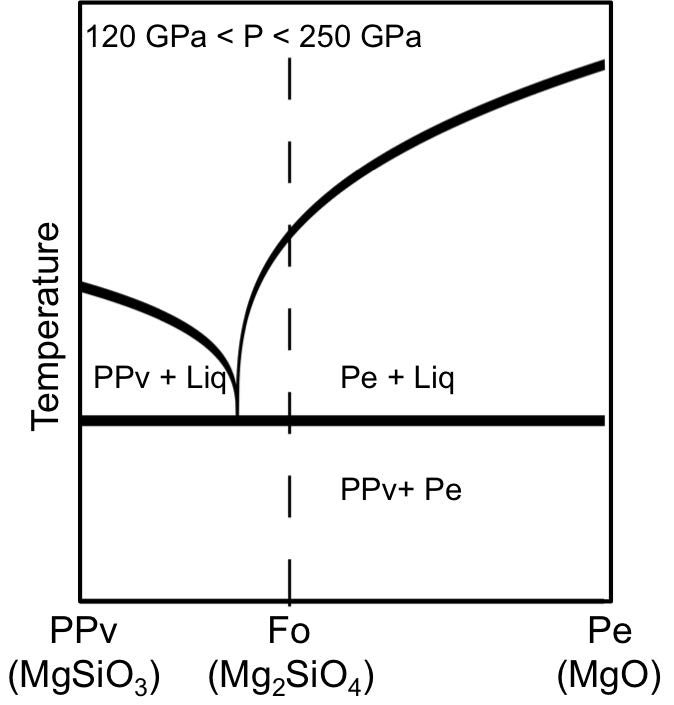 Figure 1. Qualitative phase diagram in temperature versus composition space for the MgO–MgSiO3 system at a snapshot in pressure. At forsterite (Fo) composition below the eutectic temperature (horizontal solid line), the forsterite phase assemblage is expected to be post-perovskite (PPv) plus periclase (Pe). Forsterite is believed to be a silica-poor relative to the eutectic composition, indicating a sub-liquidus phase assemblage of periclase plus silica-rich liquid.

These statements regarding the physical state of the forsterite are inherently making the assumption of thermodynamic equilibrium; however, at Livermore we often use dynamic compression techniques to study the equilibrium multicomponent material response at extreme conditions, and in some applications, we desire to understand the response of a multicomponent material at extreme conditions on short timescales. Consequently, we need to be able to answer the question of whether or not our dynamic compression experiments are observing thermodynamic equilibrium.

Assuming a simple nucleation model for formation of the new phases and scaling arguments for the time it takes to form a new phase, time~Length2/Diffusivity, we can make testable hypotheses for the experimental timescale required to observe thermodynamic equilibrium. Based upon calculations of the ionic diffusivity in the liquid and in solid Mg2SiO4 (de Koker 2008) and estimates for the smallest likely grain size, we hypothesized that when the liquid diffusivity moderates the formation of the new phase, the nanosecond timescale experiments are sufficient to observe thermodynamic equilibrium, but if the solid-state diffusivity mitigates formation of the new phase, then the microsecond timescale experiments, or longer, may be required to observe thermodynamic equilibrium.

To test our hypothesis regarding the liquid diffusivity, we performed a series of shock experiments and shock-ramp re-solidification experiments on forsterite and iron silicide at the Omega and Omega Extended Performance laser facilities at the Laboratory for Laser Energetics in Rochester, New York. A schematic of the experimental setup is shown in Figure 2. While the iron silicide data are still being analyzed due to complications with the data, the forsterite data provide a clear result. When shocked below the melting transition, where there is no appreciable fraction of liquid, we do not observe the formation of MgO, which was the “smoking-gun” for observing thermodynamic equilibrium, as it would provide a clear x-ray diffraction signature. However, as the shock pressure in the forsterite was increased to >~150 GPa, we observed the formation of a sharp diffraction line consistent with the (200) B1 MgO peak, as well as a broad diffuse scattering feature consistent with the presence of a liquid. Consequently, we have confirmed that when there is liquid present and the ionic diffusivity of the system is moderated by the ionic diffusivity of a liquid, then the nanosecond timescale is sufficient to observe chemical equilibrium. To further test our hypothesis, and to confirm that there is no path dependence to our conclusion, we performed a series of shock-ramp resolidification experiments, where we shocked the forsterite to a state on the melt curve, and then shocklessly compressed the forsterite to increase the solid fraction. In these experiments, we again observed formation of the B1 MgO phase out of the liquid on the nanosecond timescale, confirming our hypothesis that the liquid phase is necessary to observe a rapid approach to thermodynamic equilibrium. 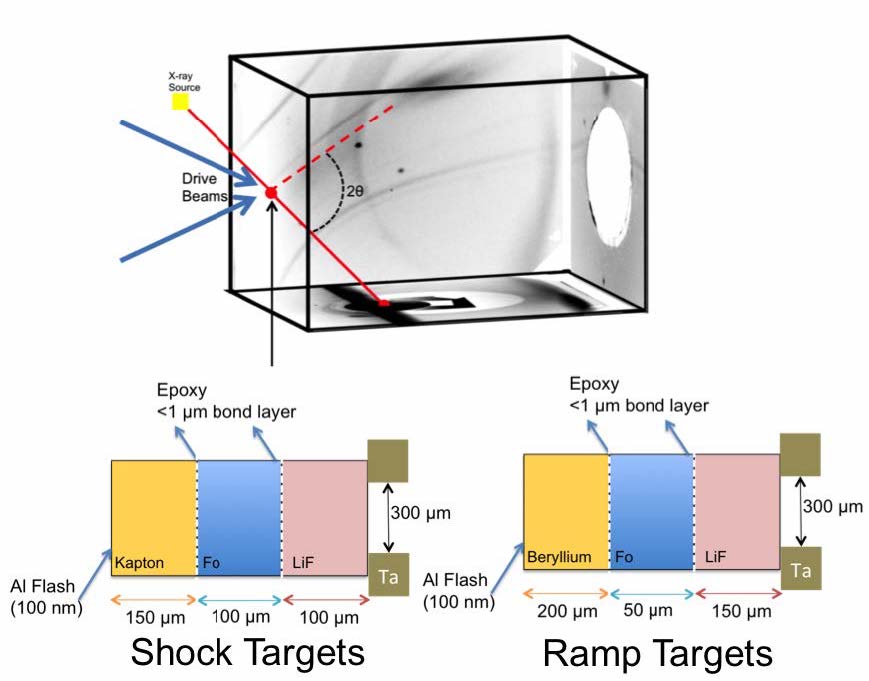 Figure 2. Top: Schematic depiction of the powder x-ray diffraction image plate (PXRDIP) diagnostic at the Omega Extended Performance laser at the Laboratory for Laser Energetics in Rochester, New York. Scattered x-rays are collected by the image plates while the sample is in the shocked or high pressure state. Bottom: Schematic depiction of the samples used for both shock and ramp targets. A low-Z ablator is used to convert laser energy into a strong shock or ramp compression wave. The lithium fluoride (LiF) window is used to tamp the pressure in the sample, while the x-rays are being diffracted by the forsterite sample.

To test for the timescale to observe equilibrium solid-state chemical segregation of Mg2SiO4 to MgSiO3+MgO, we performed a series of in-situ x-ray diffraction experiments, using the gas-gun platform at the new Dynamic Compression Sector at the Advanced Photon Source of Argonne National Laboratory, Argonne, Illinois. In Figure 3, we show a schematic of the experimental setup. The key difference in these experiments, is that the samples are much larger and therefore the conditions at which the material is at high pressure is much longer: hundreds of nanoseconds. In these experiments, the samples were shocked to pressures of ~45 and 75 GPa, where we observed excellent quality high pressure diffraction data. At a shock pressure of 45 GPa, we observed a mixed phase of the compressed ambient forsterite phase as well as the metastable forsterite III phase, as measured in the diamond anvil cell (Finkelstein 2014). Upon shocking to 75 GPa, we only observed the compressed forsterite III phase, which maintains the Mg2SiO4 composition. Consequently, even on the gas-gun timescale of hundreds of nanoseconds, there is not enough time to observe solid-state chemical segregation in the forsterite. This result is consistent with our hypothesis that if the solid-state ionic diffusivity is mitigating the segregation process, then the process will take a relative long time and may not be observable using our dynamic compression platforms. 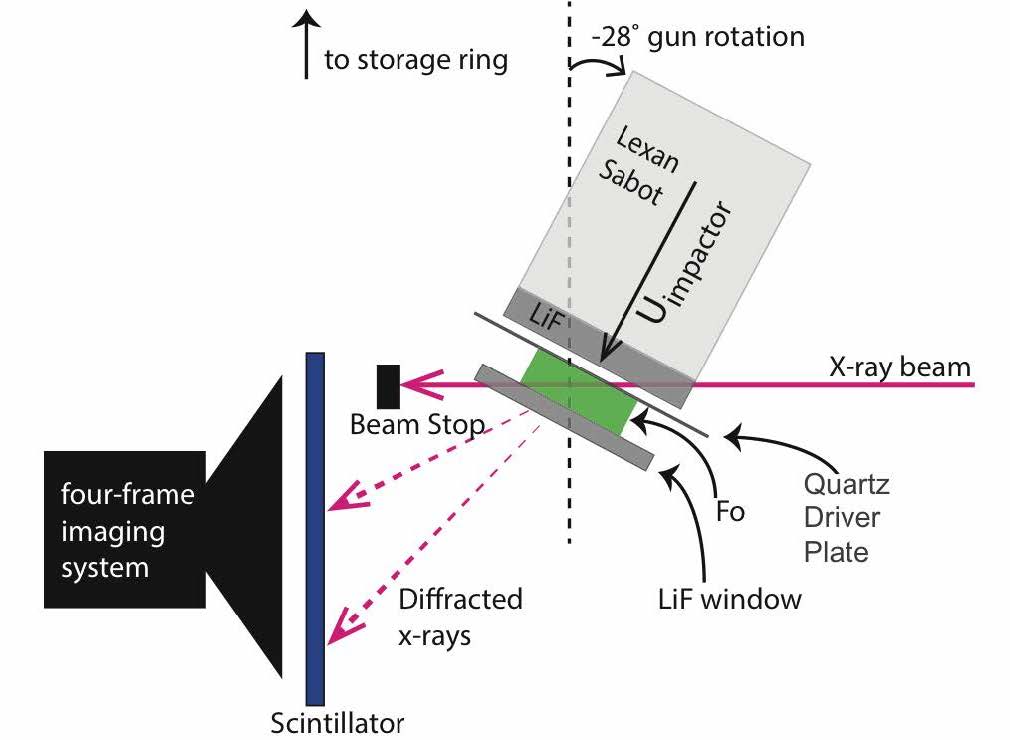 Figure 3. Beam configuration for in-situ x-ray diffraction measurements on the gas gun at the Dynamic Compression Sector at Argonne National Laboratory, Argonne, Illinois. The gas gun launches a lithium fluoride (LiF) projectile mounted on a Lexan sabot into the forsterite (Fo) sample. Once the shock wave is partly through the sample, the x-rays from the synchrotron illuminate the sample and diffract off of the partially shocked forsterite. The diffracted x-rays are captured on a framing camera for further analysis. While this is a different experimental setup, the main physics difference between the gas-gun experiments and the laser experiments are that the samples are nearly 20 times thicker, and therefore the shock states last for nearly 20 times longer.

Through these and supporting experiments on Mg2SiO4, Fe–Si, and MgO, we found a period of nanoseconds is enough time to observe chemical equilibrium in multicomponent materials at extreme conditions, when there is liquid present. If there is no liquid, then the equilibrium of chemically segregated state could take microseconds or longer to form, assuming the diffusivities are similar. We have also shown that a simple scaling law for the timescale to achieve chemical equilibrium provides a reasonable estimate for designing experiments and comparing to applications.

Our project supports the Laboratory's high-energy-density science core competency as well as the NNSA's goal to strengthen its science, technology, and engineering base, by addressing a key technical question that supports our mission space of understanding the properties of materials at extreme conditions. For example, we use Lawrence Livermore's National Ignition Facility (NIF) to study the material properties of numerous single component materials of relevance to the weapons program. However, the NIF probes materials on the nanosecond timescale, and we need to understand how the data we obtain on the nanosecond timescale relates to equilibrium properties in planets or scales to the timescales of different applications. This study represents Livermore’s first significant effort into investigating the complexities of the high-pressure properties of multicomponent materials.

The information gained from this project will impact the design of future experiments for a long time to come, as we now know that if we wish to observe the equilibrium phase assemblage during a laser experiment, which could include high pressure chemical segregation, there needs to be liquid present to increase the ionic diffusivity. Furthermore, for applications where we are potentially concerned about chemical segregation on the short timescale, we have learned that it is critical to know whether the material is partially molten or not. If the application does not reach high enough temperatures to melt, we now know that there is likely not enough time to observe chemical segregation. This information can significantly reduce the required R&D to understand dynamic compression processes.

The research from this LDRD will act as the foundation for future dynamic compression experiments on multicomponent materials, whether it be an attempt to reach equilibrium by first shock melting the sample and then re-solidifying through ramp compression, or to drive well into a region of metastability. This is a timely effort, as the academic dynamic compression community is increasingly interested in the response of multicomponent materials, and many are beginning to use high-pressure high-energy-density facilities.