Chemically stable and optically transparent polymers are broadly applicable as coatings for a variety of applications, including optical, electronic, biomedical, or sensing devices. Such materials may serve as next-generation target shells or capsule ablators used to compress the laser ignition target for Inertial Confinement Fusion experiments. Plasmas are currently used to synthesize chemical vapor-deposition polymers, but the resulting plastics are not as chemically stable or optically transparent as those synthesized by liquid-phase means. In this project, we are exploring the use of chemical vapor deposition to synthesize polymers that are chemically stable and optically transparent. We are using non-plasma synthetic vapor-phase strategies that mimic traditional polymer synthesis, thus allowing us to tailor polymer properties while maintaining the advantages of chemical vapor-deposition processing. Unlike the complex chemistry and dynamic properties of plasma chemical vapor deposition of polymers, we aim to synthesize polymers that are as simple and stable as commodity polymers made using traditional liquid-phase means. Our system will use thermal- or photo-excitation of specific chemical additives to initiate polymerization without fragmenting the polymer precursor gas. Eliminating this fragmentation will allow us to design polymers based on predictive structure–property relationships.

Chemically stable and optically transparent chemical vapor deposition polymers would simplify target fabrication, improve ablator performance by reducing x-ray opacity, and enable detailed characterization of the critical fuel–ablator interface (an unsolved problem in target fabrication) for Inertial Confinement Fusion applications. Chemically stable and optically transparent polymers will also be broadly applicable as coatings for a variety of additional applications including optical, electronic, or biomedical devices. Furthermore, these polymers may be useful as surface treatments for additively manufactured components with complex topology, because it would allow for independent control of bulk and surface material properties, in support of the Laboratory's core competency in advanced materials and manufacturing.

In FY15 we (1) received a coating system designed for non-plasma polymer chemical vapor deposition; (2) began producing coatings after making modifications and meeting facilities requirements; (3) collaborated with the University of Connecticut to fabricate candidate polymers; (4) improved on the chemical stability of the baseline LLNL plasma polymer; (5) characterized the stability of the plasma polymer in various illumination and atmospheric conditions, gathering data that will serve as benchmarks for evaluating materials synthesized with the new coating system; and (6) discovered unusual photoluminescence behavior of the plasma polymer and correlated it to photo-stability, creating a powerful new diagnostic. 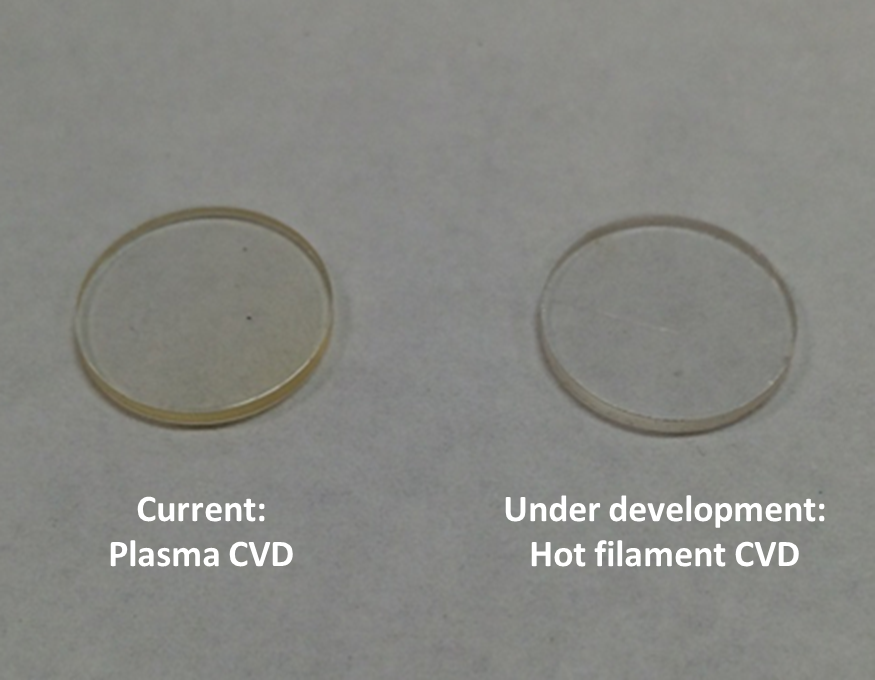 Progress in chemical vapor deposition (CVD) of transparent polymers. The images show 1-μm-thick films deposited on top of transparent windows. The current process deposits a polymer with a yellowish tint that is related to its propensity to age over time. A polymer deposited with the process developed in FY15 is optically transparent and more stable under use conditions.