Nucleosynthesis for Science and Security

We are developing approaches to determine neutron-induced reactions on radioactive isotopes for experiments at the DOE-funded Facility for Rare Isotope Beams. We will determine direct measurement techniques for long-lived radioisotopes and indirect approaches for isotopes too short-lived to be accessed with direct measurements, in addition to a microscopic and unified description of reacting nuclei that moves beyond empirical models.

Nuclear reactions are vital to nuclear science and its many applications: they are the mechanism for forging elements in the cosmos, the source of energy for both stars and nuclear weapons, the principal probes used to study nuclear properties, and the primary diagnostic signatures for stockpile stewardship and nuclear forensics. In particular, nucleosynthesis, the process that creates new atomic nuclei from protons, neutrons, and other nucleons, and weapon-performance simulations require detailed knowledge of reaction rates on unstable nuclei. Yet, most reaction experiments have been confined to the small fraction of all nuclei that are stable, and a theoretical foundation for reactions with a true predictive capability is lacking. The broader nuclear science community has begun building major programs to take advantage of the unprecedented yields of radioactive isotopes that will soon be available at the Facility for Rare Isotope Beams at Michigan State University, a new particle accelerator for nuclear science funded by the DOE Office of Science. We plan to establish the multifaceted approaches needed to determine neutron-induced reaction rates on radioactive nuclei at this facility through a coordinated effort that takes advantage of the nuclear physics, radiochemistry, nuclear theory, and high-performance computing expertise at the Laboratory. We will develop (1) direct measurement techniques for long-lived radioisotopes, where production rates and decay properties allow; (2) indirect approaches for isotopes too short-lived to be accessed with direct measurements; and (3) a fully microscopic and unified description of reacting nuclei that moves beyond empirical models. In all cases, these approaches will be demonstrated on isotopes that can be studied using capabilities available now at the National Superconducting Cyclotron Laboratory at Michigan State University and elsewhere over the next three years.

The Facility for Rare Isotope Beams offers the opportunity to rectify the long-standing gap in understanding reactions for radioactive nuclei needed to revolutionize the fundamental scientific understanding of the origin of heavy elements and to measure the nuclear data required for high confidence in the safety, security, reliability, and effectiveness of the U.S. stockpile. We expect to establish the diversified suite of approaches needed to determine neutron-induced reactions on radioactive isotopes at this facility. For isotopes near stability, we will develop isotope-harvesting techniques and perform direct neutron-capture measurements on samples such as zirconium-88. For isotopes more than a few nucleons off of stability, we will develop indirect methods using nuclear beta decays and inverse-kinematics surrogate reactions in which we bombard lighter target nuclei with a radioactive heavy-ion beam. These efforts will be accompanied by the development of a predictive theory of nuclear reactions, which will be crucial to successfully interpret the experiments and reliably extract desired cross sections from indirect measurements and provide reliable predictions for most reactions for which there are no measurements.

A successful research project will allow for breakthroughs in the understanding of reactions on radioactive nuclei at the Facility for Rare Isotope Beams, which is relevant to the Laboratory's core competency in nuclear, chemical, and isotopic science and technology. Developing approaches needed to determine neutron-induced reactions on radioactive isotopes is also highly relevant to the core competency of nuclear weapons science and DOE’s goal to maintain the safety, security, and effectiveness of the nation’s nuclear deterrent without nuclear testing. Furthermore, the project will develop strong partnerships between the nuclear physics, radiochemistry, and nuclear theory and modeling groups at LLNL and the scientific community developing programs at the Facility for Rare Isotope Beams.

In FY17 we made significant progress in our three main research thrusts. Specifically, we (1) prepared for harvesting and cross-section measurements on zirconium-88 with a vanadium-48 collection at the National Superconducting Cyclotron Laboratory, and produced zirconium-88 test samples that we irradiated with neutrons at the University of Missouri Research Reactor; (2) played a key role in interpreting regular kinematics of molybdenum-95 (d,p) as a neutron capture, and applied the approach to inverse-kinematics molybdenum-95 and strontium-95 data; and (3) successfully computed, within density functional theory, antisymmetric projectile–target wave functions in the interaction region, and devised a way to also define asymptotic solutions, where the two fragments are far apart from each other. 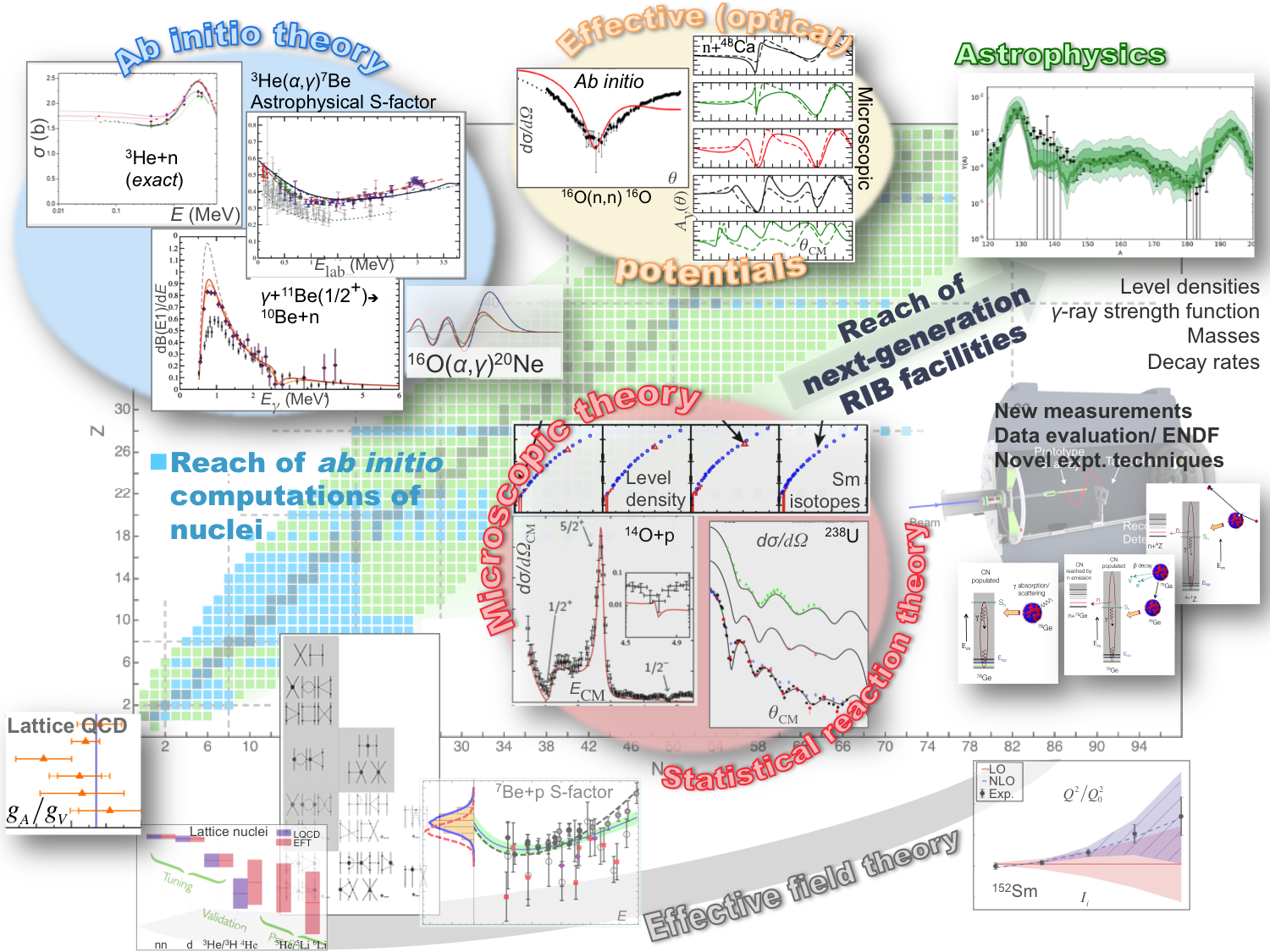 Livermore nuclear scientists played key roles in bringing together physicists from the low-energy nuclear structure and reaction communities to identify avenues for achieving reliable and predictive descriptions of reactions that are needed to understand how the elements are forged in the cosmos and for a variety of applications of nuclear science. During a five-week workshop, theoretical aspects of nuclear reactions and the connection to experimental advances anticipated with next-generation radioactive-ion beam facilities such as the Facility for Rare Isotope Beams (FRIB) were discussed. The graphic is from the workshop report (Escher et al. 2017a).

Ratkiewicz, A., et al. 2017. "Validating the (d,p(gamma)) Reaction as a Surrogate for (n,(gamma)) on Rare Isotopes Using the 95Mo(d,p(gamma)) Reaction." Presentation at the 3rd International Conference on Advances in Radioactive Isotope Science, Keystone, CO, May 28–June 2. LLNL-ABS-721479.