In the last two decades, adaptive optics systems in astronomy have advanced from concept demonstrations to scientific mainstays, opening entirely new scientific frontiers, such as the first ground-based images and spectra of faint exoplanets orbiting other stars. Adaptive optics also have the potential to correct internal distortions and provide new, adaptive modes of operation for scientific use when applied to bright, nearly coherent x-ray light sources. We have advanced the technique of adaptive x-ray optics from single components (e.g., a deformable mirror and a metrology method) to an integrated, validated understanding of complete system performance. To do so, we custom designed and built an x-ray experiment and deployed it with our best-in-class, 45-cm long, x-ray deformable mirror at the Advanced Light Source at Lawrence Berkeley National Laboratory. We demonstrated a unique capability to custom-shape the x-ray beam profile to arbitrary shapes. We used a grating interferometer to measure the wave-front distortion and “closed the loop” of imaging and feedback in real time, commanding the x-ray deformable mirror to within 3-nm root mean square of the desired surface figure. For this process, detailed, physics-based simulations were used to validate performance. The next step in adaptive x-ray optics advancement will be designing a specific scientific experiment at a light source, such as producing a customized beam profile for a material science experiment.

All optical systems have distortions, whether they are internal figure errors on optics, or external sources such as atmospheric turbulence. Adaptive optics is a technique to correct these distortions in real time, and works by first measuring error in the incoming light. Electronic signals are then sent to a deformable mirror, which rapidly changes its surface figure to correct the wave front. In the last two decades, adaptive optics systems in astronomy have advanced from concept demonstrations to scientific mainstays, opening entirely new scientific frontiers such as the first ground-based direct images and spectra of faint exoplanets orbiting other stars. Adaptive optics has the potential, when applied to bright, nearly coherent x-ray light sources, to correct internal distortions1 and provide new, adaptive modes of operation such as customized beam-shaping for scientific use.

Our proposed goal was to build and evaluate the performance of the world's first real-time adaptive x-ray optics system, using Livermore's best-in-class, 45-actuator x-ray deformable mirror with a wave-front sensor in experiments conducted at Lawrence Berkeley's Advanced Light Source. We have successfully closed the loop and controlled the x-ray deformable mirror to a repeatable figure with 3-nm root-mean-square height residual error, operating at 0.25 Hz. With this project, we have achieved the following milestones:

Our overall technical approach was to develop an integrated and experimentally validated understanding of adaptive x-ray optics system performance. We designed the components to work together (integrated) for a specific purpose—that is, the grating interferometer was designed to measure the necessary spatial frequencies of the x-ray deformable mirror's figure in order to flatten it. We developed detailed, physics-based models to design the experiment, and these simulations were then validated through x-ray experiments. In addition, the specific aspects of the experiment design were verified—for example, checking whether the noise level and spatial frequency range of the metrology as implemented matched the design.

In the first phase of the project, the x-ray deformable mirror was fully characterized with calibrated, visible-light metrology. The mirror actuator responses and linear superposition matched that predicted in its design by finite-element analysis. Using these models and precise fourth-order calibrations of the voltage response, the x-ray deformable mirror was repeatedly flattened to better than 1-nm root-mean-square height figure error,2 as shown in Figure 1.

Figure 1. Precise visible-light metrology and finite-element models of the x-ray deformable mirror response were used to generate voltages that flattened its surface figure across the 45-cm length to better than 1-nm root-mean-square height.

In the second phase of the project, the x-ray experiment to be used at the Advanced Light Source was designed and commissioned, as shown in Figure 2. The gold pinhole filtered the incoming 3-keV monochromatic x-ray beam, producing a clean wave front for experiments. The x-ray deformable mirror, through adjustment of its surface height, modulates the beam. The beam can then be imaged directly onto the charge-coupled device, as is used in the beam-shaping results below. The experiment also had a Kirkpatrick–Baez optic that produces first a focus, then a diverging beam at the detector. This second configuration is similar to most x-ray end stations, which use a focused beam. Furthermore, the focusing optic is necessary to implement high-precision metrology for this experiment.

The experimental setup was designed to provide flexibility for alignment (e.g., adjustable graze angles) and to enable the entire 45-cm length of the x-ray deformable mirror to be utilized. This first in-vacuum use of this x-ray deformable mirror with x rays has led to several lessons learned. While the x-ray deformable mirror functions well at 2−6 Torr, its internal strain gauges cannot be powered continuously, because this results in significant heat build-up in the mirror and shape distortions. Future versions will require active cooling. Our experiment placed stringent requirements on the quality of the incoming beam from the synchrotron. Unanticipated problems with this necessitated an upgrade of the beam-line monochromator and design and installation of an additional harmonic suppression system, with associated schedule delays.

The near-field beam-shaping scenario provided a relatively simple first validation test for the adaptive x-ray optics system. In this case, no focusing optic was used. There are only three components in the system: the pinhole, the x-ray deformable mirror, and the detector. Though a deformable mirror’s height is typically used to adjust the phase of the electric field, it can also be used to control the amplitude under certain circumstances. A proposal for x-ray intensity shaping has been given by Laundy.3 By adjusting the x-ray deformable mirror's voltages, we can induce a phase change that partially converts to amplitude (through the Talbot effect) in the near field at the detector. Figure 3 shows the directly imaged beam and the average profile compared to a simulation of the experiment. The simulation accurately captures beam features, which depend on numerous factors such as mirror graze angle and the Talbot effect.

Figure 3. X-ray deformable mirror voltages were adjusted to form a sinusoidal height to validate simulation against experiment. The directly imaged intensity at the detector (left) is correctly estimated by the physics-based simulation of the experiment (right).

The validation of the simulation means that we can use that simulation as a forward model that describes how the beam shape changes with specific voltages. This was used with a numerical nonlinear optimization code to estimate the voltages that will produce a specific beam profile. Figure 4 shows the results of one experiment, where the diffraction pattern from the pinhole, which produces a ±15% “concave down” profile, is converted to a flat profile. This required a 130-nm root-mean-square height signal on the x-ray deformable mirror surface.

Figure 4. A nonlinear optimization code was used to determine voltages that convert the ±15% “concave-down” beam profile to a flat top (green curve at right). When applied, these voltages produce the desired shape. The direct image is shown on the left, with data, simulation, and desired profile on the right.

For high-precision metrology, the best approach was grating interferometry, which has previously been used at x-ray light sources, notably by Rutishauser.5 A special grating made of a 1.9-μm-thick, freestanding membrane of silicon was custom fabricated by Lawrence Berkeley’s Center for X-Ray Optics. This grating, with 3.5-μm wide lines, was specifically designed to allow measurement of up to 11 cycles across the x-ray deformable mirror’s diameter (enough to flatten it to a 1-nm root-mean-square figure). The phase grating produces a fringe pattern at the detector, where the lateral motion of the bright fringes encodes the phase difference. We validated the sensor as deployed, demonstrating that at a 2.5-nm root-mean-square height, the sinusoid was measured at a signal-to-noise ratio of eight, as predicted from the design (Figure 5). 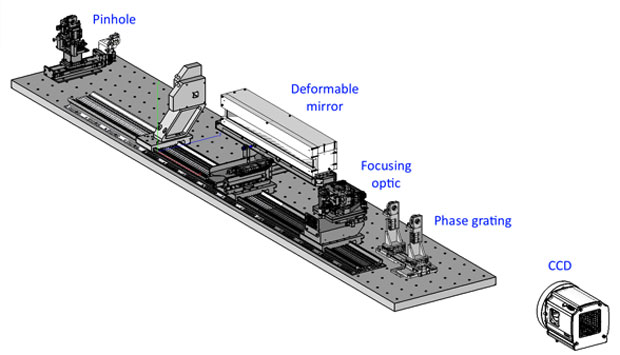 Figure 5. A 2.5-nm root-mean-square height sinusoid was measured at an signal-to-noise ratio of eight, as predicted from the design. Each horizontal line represents the processed slopes from a single-exposure fringe pattern, relative to a reference pattern. The processed phase difference is shown on the left, the expected measurement from a known height on the x-ray deformable mirror is shown in the middle, and the remaining error in measurement is shown on the right.

To use the interferometer to control the x-ray deformable mirror, we used an interaction and control matrix approach, where the x-ray deformable mirror itself is used to create the control model. For the closed-loop tests, the mirror was first placed at a known set of voltages (e.g., a sinusoidal figure) and a "reference slope” measurement was taken. Then the voltages were reset and the reference was subtracted from each measurement. In this way the mirror was driven to a shape that presents the same phase error to the grating interferometer.

Figure 6 shows the results of placing the x-ray deformable mirror at the voltages that produced the 0.7-nm root-mean-square flat shape (see Figure 1). After loop convergence, the x-ray deformable mirror height, as calculated from voltages, shows that the figure matched to a 3-nm root-mean-square error. Though photon noise is a limiting factor, the main issue for the correction is that the control matrix did not command the x-ray deformable mirror’s mid-range spatial frequencies. The closed-loop operation was at 0.25 Hz. The latency was dominated by 2-s exposures and a 1-s delay because of upstream hardware issues. Computational time was negligible compared to exposure time. 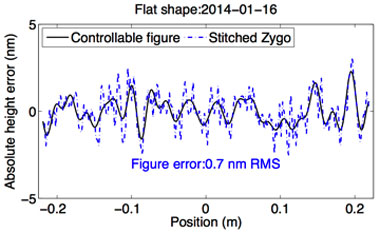 Figure 6. Grating interferometer measurements were used to control the x-ray deformable mirror in a closed loop and drive the mirror to a known figure. Desired voltages (blue) and final voltages (red) are shown on the left. The estimated mirror figure based on these voltages shows that most of the low-frequency shape needed to flatten the mirror is corrected, but a 3.3-nm root mean square of error at mid-spatial frequencies (black) remains, because of the control matrix ignoring these modes (right).

Development of the first U.S. capability for adaptive x-ray optics can address broad DOE and Laboratory needs including advanced x-ray optics that may significantly improve beam quality at DOE x-ray light source user facilities such as the Linac Coherent Light Source at the SLAC National Accelerator Laboratory at Stanford and advanced diagnostics for laser-based user facilities such as Livermore’s National Ignition Facility, in support of the Laboratory’s core competency in laser and optical materials. In addition, use of deformable x-ray optics provides a way to correct “thermal bump” figure errors downstream, which would otherwise be expensive and challenging to fully correct at the source with custom cooling systems.

We have developed an integrated and validated understanding of the key components of an adaptive x-ray optics system. We have calibrated and can precisely control our x-ray deformable mirror at the nanometer level, which has successfully been fielded at the Advanced Light Source in an x-ray experiment. The physics-based models of the mirror and experiment are accurate enough that they can be used to precisely control the absolute shape of the x-ray beam in the near field. The grating interferometer measures slope errors at its designed noise level, and has been used to control the x-ray deformable mirror in a closed loop at 0.25 Hz to a level as low as 3-nm root-mean-square figure height error. The mirror's performance is presently limited by photon noise and the control algorithm, which controls only a limited range of spatial frequencies of the x-ray deformable mirror surface. The next step is to use adaptive x-ray optics in a scientific experiment as a demonstration of its value. This could be conducted in the existing setup at the Advanced Light Source, for example, using the x-ray deformable mirror to assist in ptychography measurements used to solve diffraction-phase problems. Alternatively, the x-ray deformable mirror could be tested in a contained experiment at a facility such as the Linac Coherent Light Source, where it would provide a customized beam profile for material studies.