The development of high-repetition-rate, energetic, short-pulse lasers is an emerging field with potential applications in industry, medicine, and national security, as well as high-energy-density science. Experiments and applications that previously required hours or days to complete may be accomplished over the span of only seconds or minutes, and experiments containing many thousands of laser pulses are anticipated. However, controlling the output pulse shape or energy distribution in the laser pulse of such systems comes with additional risks of laser-induced damage to optics. Most solid-state lasers (and particularly those that generate pulses faster than a few shots per day) are designed to operate below the laser-induced damage threshold of the laser optics to avoid initiating optical damage. Because of the extremely short pulse duration, chirped-pulse amplification is frequently employed to effectively lengthen the pulse duration by up to 10,000 times or more. This lengthening of pulse duration reduces the peak power and intensity of the laser light on optics by the same factor, thereby increasing the damage resistance of the laser optics. Even so, high-energy, chirped-pulse amplification lasers based on titanium-doped sapphire crystals are typically designed to operate only slightly below the laser-induced damage threshold, and detailed and time-consuming modeling of the laser pulses in space and time are required to verify that a particular configuration will not induce optical damage. To address this challenge, we are developing a new technique for determining the safe operating regime of short-pulse, chirped-pulse amplification lasers. In particular, we will develop a high-fidelity model of the portions of an existing Livermore-designed-and-operated titanium–sapphire chirped-pulse amplification laser system (shown in figure) that are most sensitive to laser-induced damage. This model will then be exercised with high spatial and temporal resolution for a limited set of laser configurations. Taking a perturbation-based approach, we will utilize these models to interpolate high-fidelity laser propagation modeling for all parameters and demonstrate the applicability of the resultant automated optimization algorithm on a high-energy laser system, ensuring that the laser system remains in a desirable configuration during the automated optimization process.

This project offers development of automated real-time active control over the safe configuration of a high-energy, short-pulse laser, enhancing Livermore’s core competency in lasers and optical science and technology. By taking a major step toward implementing a safe active feedback for such laser systems, this work will help towards realizing the full potential of the next generation of high-energy, high-repetition-rate, short-pulse lasers, providing users with a novel approach to performing experiments by enabling the laser itself to determine the optimal configuration, rather than relying on highly complex numerical models that may not even contain all of the relevant physics. This research is also applicable to Livermore's core competency in high-energy-density science.

In FY16 we (1) identified a laser modeling code that will allow for high-fidelity modeling of Livermore's high-intensity laboratory laser system; this code will be benchmarked against experimental results; (2) identified and are making progress along two parallel pathways to improve the speed and performance of modeling the damage-prone portions of the laser system; (3) reviewed existing control hardware and software in the laser laboratory; (4) planned for and started implementing several new diagnostics and control points needed at the laboratory laser; (5) completed a detailed design of a process-optimization loop to be implemented; and (6) identified a simple proof-of-principle experiment on which to demonstrate the experimental-feedback-based automated process optimization loop planned for FY17. 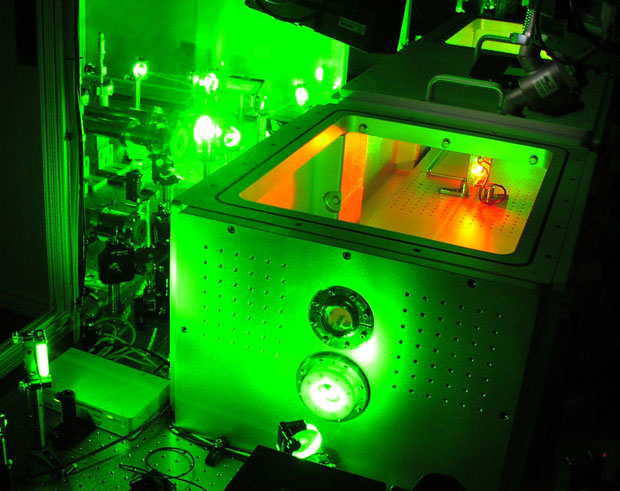 Laser diagnostics and experiments provide feedback which can be used to optimize an experimental outcome. However, the laser configuration in centimeter-scale-aperture systems (like the Ti:sapphire short-pulse laser in Livermore's High Irradiance Laser Laboratory pictured here) needs to be validated as safe to operate in real time so that it does not induce damage to itself or the experiment. When the laser fires many times each second, this must be done in an automated and intelligent manner.