We expect to enable transformational redesigns of the hohlraum target capsule to develop one or more platforms that can support long, low-heat-transfer pulses while maintaining a high degree of efficiency, symmetry, and modeling integrity for Inertial Confinement Fusion. Another key application of an available suite of simplified hohlraum platforms is in high-energy-density studies such as thermal and radiation transport, without the modeling challenges of excessive electron and x-ray preheat. We will provide conceptual designs for three concepts, including capsules with additional laser entrance holes at the midplane, two concentric spherical shells that enclose an inner capsule, and foam-baffle structures within the hohlraum to control symmetry and spectral content of radiation reaching the capsule. We will test the key physics questions for each concept in subscale experiments on the OMEGA laser facility at the Laboratory for Laser Energetics in Rochester, New York. Based on the results, we will select one or two concepts and design full-scale feasibility experiments at Livermore's National Ignition Facility.

Developing an efficient, symmetric, spectrally simpler hohlraum drive is critical for performing relevant experiments in both high-energy-density science research and stockpile stewardship. This would enable more precise high-energy-density experiments that allow more accurate fundamental physics understanding of radiation flow, x-ray conversion, and self-heating burning plasmas. Research into the use of foam materials for fusion targets also aligns with the inertial fusion science and technology strategic focus area at the Laboratory.

In FY16 we (1) completed designs of the three advanced hohlraum concepts; (2) developed a technique for making gold foam and manufactured a prototype block of 550 mg/cm3 gold foam; (3) applied for and were awarded time on the Livermore Janus laser to measure backscatter and laser propagation in scaled silicon dioxide and tantalum pentoxide foam-filled halfraum (half of a hohlraum) target capsule (see figure); (4) applied for and received a shot day at the National Ignition Facility to field a single-quad experiment to investigate backscatter and propagation of an ignition-class, two-shock laser pulse in a foam-filled halfraum; and (5) designed both sets of experiments using HYDRA (high-energy-density physics) and Fp3D (three-dimensional laser–plasma interaction) codes and began target fabrication. 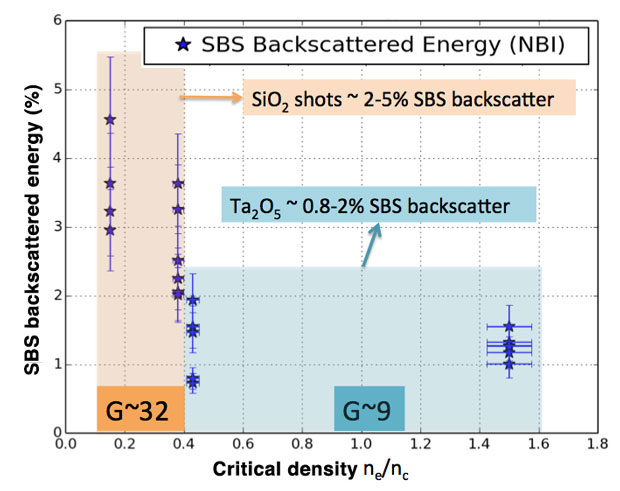 Percent stimulated Brillouin scattering (SBS) energy versus fraction of critical density for foam-filled cylinders heated by a single 0.5-μm laser at 103 × 14 W/cm2 on the Jupiter Laser Facility at Lawrence Livermore. Backscatter was higher for silicon dioxide (SiO2) foams than for the tantalum pentoxide (Ta2O5) foams, as were the calculated linear gains (G): 32 for SiO2 versus 9 for Ta2O5.