We developed the SQDFT code, a new capability for the accurate and efficient quantum simulation of material properties across an extreme range of densities, pressures, and temperatures. It enables full use of Kohn-Sham quantum molecular dynamics in diverse physical regimes, including materials under expansion, condensed matter, warm dense matter, and plasmas well beyond the previous state-of-the-art, which was restricted to temperatures below 100,000 kelvin. We demonstrated SQDFT by calculating the Hugoniot curve of carbon up to millions of degrees kelvin and gigabars of pressure. We also conducted a performance study of the code on a supercomputer at Lawrence Livermore National Laboratory. This new capability addresses a gap in our current theoretical capabilities that was limiting our ability to fully leverage new high-energy-density (HED) experimental facilities such as the National Ignition Facility (NIF) and the Linac Coherent Light Source.

Many of the NNSA's programmatic applications require equation-of-state (EOS) models that span up to nine orders of magnitude in density and temperature as input to hydrodynamic simulations. Consequently, we need tools that are both accurate and efficient throughout the entire phase space and across diverse physical regimes, including materials under expansion, condensed matter, warm dense matter, and plasmas. Most of this phase space is completely inaccessible to focused science experiments, meaning that we must rely on theoretical methods in these regimes. Our current theoretical workhorse is the quantum molecular dynamics (QMD) method based on density functional theory (DFT). While DFT-based QMD has proven highly successful in describing the properties of many materials, all previous implementations possessed an important shortcoming: The method as implemented was typically limited to temperatures below approximately 100,000 kelvin due to a steep increase in computational cost with increasing temperatures. Furthermore, this cost is even greater for high-Z materials in comparison to lighter low-Z materials (where Z is the nuclear charge).

A new theoretical capability was needed to enable HED science research—such as that conducted at DOE facilities such as the NIF at Lawrence Livermore National Laboratory, Linac Coherent Light Source at SLAC, and the Z-machine at Sandia National Laboratories—at temperatures two to three orders of magnitude higher (10 to 100 million kelvin) than was feasible previously. In addition, this capability was needed to bridge the current gap between condensed matter and plasma physics (i.e., also known as the warm-dense-matter regime). We addressed that limitation by developing and implementing a novel spectral quadrature-based method for DFT at high temperatures (SQDFT). The SQDFT method formulates DFT densities, energies, and forces as spectral integrals, yielding a linearly scaling method applicable to metals and insulators alike, whose cost decreases with temperature. This enables the study of systems at ultra-high temperatures.

The specific objectives of this research project were as follows:

All of these objectives were met. 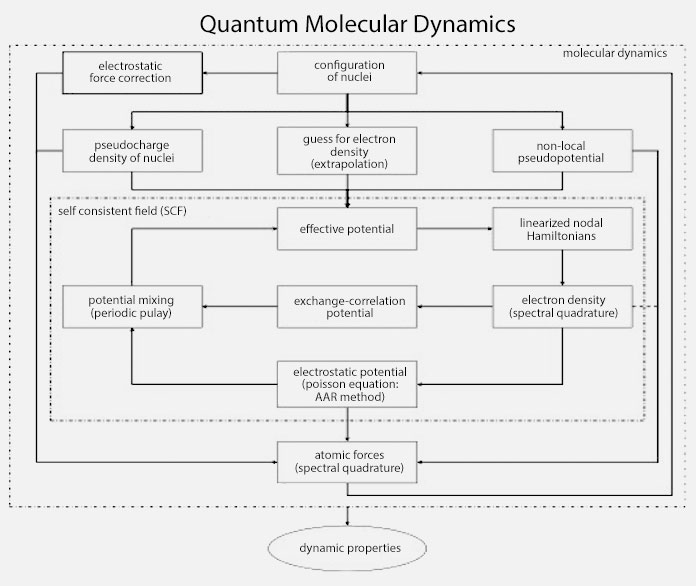 Outline of a QMD simulation. The first objective was to formulate and program the SQDFT equations into a form suitable for a massively parallel implementation. Dynamic properties of a material are obtained via a series of molecular dynamics steps. Each step involves calculating energy, forces between atoms, and stress tensors by solving the many-body electronic structure problem through SQDFT.

Our research advances the science, technology, and engineering competencies that are the foundation of the NNSA mission. Specifically, it enhances the Laboratory's core competencies in HED science and high-performance computing, simulation, and data science. The capabilities developed during this project now form a critical part of the theoretical and computational infrastructure of the Laboratory.

We implemented SQDFT in a massively parallel code and demonstrated this new capability by calculating the Hugoniot of diamond up to temperatures of millions of degrees kelvin and gigabars of pressure, conditions that are 10 times more extreme than what was previously possible. This research enables HED science in the warm-dense-matter regime and provides a completely new capability at ultra-high temperatures allowing DFT-MD simulations in the condensed-matter, warm-dense-matter, and plasma regimes.