This project focused on improving algorithms for adaptive optics (AO) in the fields of astronomy and x-ray optics. In the field of astronomical AO, we developed recommendations for the implementation and use of predictive control based on theoretical analysis and the experiences of an affiliated researcher implementing our algorithm in the Shane Adaptive Optics system. In the field of x-ray optics, we developed a modal-control algorithm for our 45-actuator x-ray deformable mirror (DM) with the use of grating metrology. Performance was demonstrated at the Advanced Light Source facility in Berkeley, CA, driving the mirror in closed-loop to within 1.3 nm root mean square (RMS) height error of a relevant surface figure.

AO is a technology that provides real-time correction of distortions in an optical system. While innovation in AO hardware is essential for advancing performance, an alternate pathway is to develop better algorithms that translate wavefront sensor (WFS) measurements into DM commands. This project focused on that algorithmic aspect in two areas: predictive control for astronomical AO and improved mirror control for x-ray applications.

There is a fundamental delay between the time when the WFS "sees" the atmospheric turbulence and the time that the DM can be updated based on that measurement. The read-out time of the WFS and the computation time of the real-time processing both contribute to that temporal delay. This has long been recognized, and control schemes that explicitly account for this have been proposed by our project members (Poyneer et al. 2007) and others (Le Roux et al. 2004). Analysis of system performance of the Gemini Planet Imager revealed that temporal delay can be the limiting performance factor even in the most advanced AO systems (Poyneer et al. 2016a), which emphasizes the need for more advanced AO algorithms. Our objective in this area was to develop a procedure for successful implementation of the existing predictive algorithm in an astronomical AO system.

Previous to this project, we deployed a best-in-class x-ray deformable mirror (XDM) (Poyneer et al. 2014) and metrology at Lawrence Berkeley Laboratory's Advanced Light Source (Poyneer et al. 2016b). We were able to use grating-interferometer measurements to control the XDM. While photon noise was significant, a major limitation of that demonstration was that the algorithm that converted gradient measurements to XDM commands only controlled a fraction of the full spatial-frequency range of the XDM. We were unable to drive the XDM with mid-spatial-frequency shapes, which are essential for "flattening" it to 1 nm RMS height error. Our objective in this area was to develop at least one improved algorithm for controlling the XDM and experimentally demonstrate it.

The predictive control research was focused on two specific areas. The first was motivated by Gemini Planet Imager’s challenges with stability in its (predictive) vibration controller. We developed new numerical tools that automatically generate system models of complicated predictive controllers and then analyzed their stability margins. A key conclusion was that many stable predictive models do not meet stability margins when used in a closed-loop system. Care must be taken to characterize true system delays and behavior to ensure stable operation. The second research area was done in collaboration with Alexander Rudy as part of his Ph.D. dissertation research (Rudy 2017) on implementing predictive control in the Shane AO system at the University of California’s Lick Observatory.

For the adaptive x-ray optics work we leveraged the existing experimental setup at the Advanced Light Source, which included the 45-cm long XDM and a custom-designed grating interferometer for metrology. To achieve improved correction with the XDM we developed a modal control approach that used a better basis set of sinusoidal ripples on the XDM. As a demonstration, the XDM was placed at a prior "flat" shape and a reference grating measurement was taken. Then the XDM was placed at uniform voltage and the modal control method was used in a closed-loop fashion. The final surface height profiles (calculated from commanded voltages and finite-element models) agree with just 1.3 nm RMS difference (see figure). 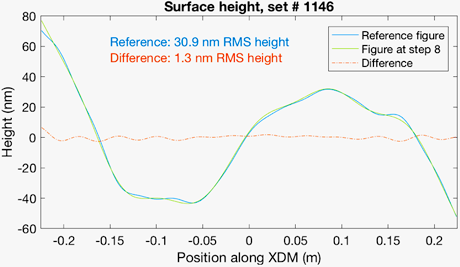 Mirror figures (calculated from commanded voltages and finite-element models) of a reference shape ( blue line ) and after modal closed-loop control ( green line ). The difference between these two ( orange dashed line ) is just 1.3 nm RMS height across the 45-cm length of the deformable optic, demonstrating that the modal algorithm can control the mirror with improved accuracy.

Advanced AO algorithms are a key enabling technology in a current research project to develop a high-speed laser AO system testbed at Livermore.