The objective of this project was to demonstrate that bacterial microcompartments (BMCs) found in nature can be re-directed for novel synthetic-biology applications. BMCs are bacterial “organelles” (i.e., a specialized part of a cell with a specific function) in which enzymes comprising a biosynthetic pathway are encapsulated in a proteinaceous shell in order to, in part, prevent toxicity of reaction intermediates. As a proof-of-concept, we engineered BMC systems to enhance recombinant expression (i.e., production) of a toxic viral protein, lysis protein E (E), from bacteriophage phiX174 in the host bacterium Escherichia coli. We hypothesized that targeting E to the interior of BMCs for encapsulation would shield the toxicity of E and thus improve its expression in Escherichia coli. In this case, E was fused with various N-terminal BMC targeting tags and co-expressed with appropriate BMC shell proteins that associate with the tags and are required to form BMCs. A PduP1-18-tagged E system (PduP being a protein) appeared to achieve the highest expression of E. Co-expression of Pdu BMC shell proteins with PduP1-18-E increased its expression by approximately 50 percent. Affinity purification of PduP1-18-E yielded 270 micrograms (µg) of PduP1-18-E per liter of induced culture. Removal of the PduP1-18-tag via proteolysis resulted in a final yield of 200 µg of E per liter of induced culture, a nearly seven-fold improvement compared to values documented in prior reports. These results demonstrate improved expression of E via re-directed BMC systems and ultimately higher E-purification yields. Our strategy demonstrates the utility of engineered BMC systems for novel synthetic-biology applications.

Heterologous expression of proteins in host organisms plays a central role in biochemistry and synthetic biology. Protein expression, however, can be challenging, especially if the protein of interest is toxic to the host organism (Rosano and Ceccarelli 2014; Keasling 2012). One potential method to overcome toxicity is to encapsulate the toxic protein within other shell proteins, in order to sequester it from interactions in the host organism. Many bacteria have evolved a mechanism to compartmentalize proteins comprising a biosynthetic pathway inside self-assembling protein shells called bacterial microcompartments (BMCs) (Chowdhury et al. 2014). BMCs are thought to prevent toxicity of reaction intermediates in the biosynthetic pathway, as well as increase the pathway-reaction efficiency by increasing the local concentration of enzymes and substrates within the compartments. Re-directing BMC shell proteins to encapsulate a toxic protein has the potential to shield the toxicity of recombinant proteins, enabling downstream applications such as purification and enhanced activity for a desired function.

As a proof-of-concept, we attempted to encapsulate lysis protein E from bacteriophage phiX174 (hereafter abbreviated as "E") inside recombinant BMCs in Escherichia coli to improve expression and downstream purification of this toxic protein. E is a 91-residue membrane protein that is responsible for bacterial cell destruction (lysis) by phiX174 bacteriophage. It inhibits host cell-wall biosynthesis and thus is extremely toxic to Escherichia coli (Bernhardt et al. 2000). Over-expression of E in Escherichia coli has been difficult, as it induces rapid cell death within 15 minutes, resulting in poor E yields. The best reported purification of E resulted in a yield of 27 µg of E per liter of culture with 84 percent purity (Zheng et al. 2009).

We targeted E to the inside of recombinant BMCs derived from 1,2-propanediol utilization (Pdu) and ethanolamine utilization (Eut) systems found in enteric bacteria (Chowdhury et al. 2014) (Figure 1). Several recent studies have identified components to successfully re-direct non-native proteins to the interior of Pdu and Eut BMCs, including the genes responsible for forming empty BMCs as well as short N-terminal sequences that interact with BMC shell proteins for interior targeting (Fan et al. 2012; Lawrence et al. 2014). E was fused to different N-terminal BMC targeting tags and co-expressed with appropriate BMC shell proteins. Addition of N-terminal targeting tags onto E allows it to be expressed at relatively high levels, while co-expression of BMC shell proteins with E can increase expression by approximately 50 percent with a PduP1-18-tagged/Pdu BMC system. Purification by nickel-affinity chromatography (Ni-NTA) followed by proteolytic cleavage (i.e., the process of breaking the peptide bonds between amino acids in proteins) of the PduP1-18-tag yielded 200 µg of E per liter of induced culture (approximately 80 percent pure), an almost seven-fold improvement in yield compared to those documented in prior reports (Zheng et al. 2009). 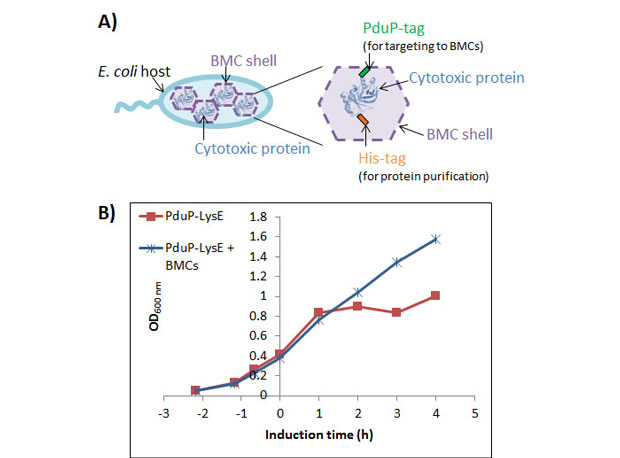 Figure 1. Top: Schematic diagram of strategy for expression of toxic lysis protein E (E or Toxic E) in bacterial microcompartments (BMCs). E is co-expressed with BMC shell proteins in a bacterial host, Escherichia coli. Association of E with BMCs (BMC shell) shields its toxicity to the host, allowing for high levels of E production. E is fused to an N-terminal tag (PduP1-18-tag) for targeting to BMCs as well as a hexa-histidine tag (His6-tag) for later protein purification. Bottom: Genes required for expression of the E construct (blue) and BMC shell proteins (purple).

In order to target E to the interior of BMCs, E was fused with known N-terminal BMC targeting tags (18-19 amino acids) and expressed in combination with appropriate BMC shell proteins from Eut and Pdu operons in Salmonella enterica, which were previously shown to produce empty, recombinant BMCs (Choudhary et al. 2012; Sargent et al. 2013; Fan et al. 2010). Escherichia coli strains were constructed to express the following: EutC1-19-E + EutSMNLK; EutC1-19-E + EutS; and PduP1-18-E + PduABJKNU (Figure 2A). The gene for each E construct was expressed from a rhamnose inducible promoter (pRha), which was chosen for tunable expression (expression level varies with rhamnose-inducer concentration). The BMC shell proteins were expressed from a T5 isopropyl-beta-D-thiogalactoside (IPTG) inducible promoter. All E constructs were designed to express a C-terminal His6-tag for later purification of the protein. Factor Xa and thrombin protease-cleavage sites were engineered appropriately for potential cleavage of the BMC targeting and His6 tags, respectively.

To compare expression of the tagged-E constructs, the different Escherichia coli strains were grown in Luria-Bertani (LB) growth medium and induced under one of the following conditions: IPTG only (BMC), rhamnose only (E), or rhamnose and IPTG co-induction (E + BMC). BMC expression was induced at the start of growth, while E construct was induced once cells reached an optical density at 600 nm (OD600) of 0.4 (about three hours after the start of growth). The timing of BMC induction was chosen to be well before E induction to ensure that enough BMC protein was available for encapsulation once E was expressed. Growth rates under the different induction conditions for each E/BMC combination strain were monitored by OD600 (Figure 2B), and after four hours of post-rhamnose induction, the relative expression level of E protein for equivalent volumes of culture was determined by Western blot analysis (Figure 2C).

For all strains, the BMC-only induction condition showed normal growth for Escherichia coli, demonstrating that expression of the different BMC shell proteins alone is not toxic to the cells. In contrast, the E-only induction conditions showed significant toxicity (manifested as an arrest or decline in OD600) due to expression of the E construct. Interestingly, the PduP1-18-E/Pdu BMC strain (pPduP1-18-E + PduABJKNU) was the only strain to exhibit improved growth under E + BMC co-induction compared to E-only induction. This result indicated some toxicity shielding due to co-expression of the full Pdu BMC system. The maximum growth difference was observed at three hours, where the E + BMC co-induction culture had approximately 20 percent higher OD600 than the E-only culture. Western blot analysis (used to separate and identify proteins) revealed that the PduP1-18-E protein level in the E + BMC culture was 149 (± 15) percent higher than the respective E-only culture. Given the high PduP1-18-E expression level and toxicity shielding observed with the PduP1-18-E/Pdu BMC system, it was chosen for further study and optimization. By altering the induction timing and concentrations of IPTG and rhamnose inducers, the expression level of PduP1-18-E was optimized to ultimately produce approximately 10 mg/L of culture. 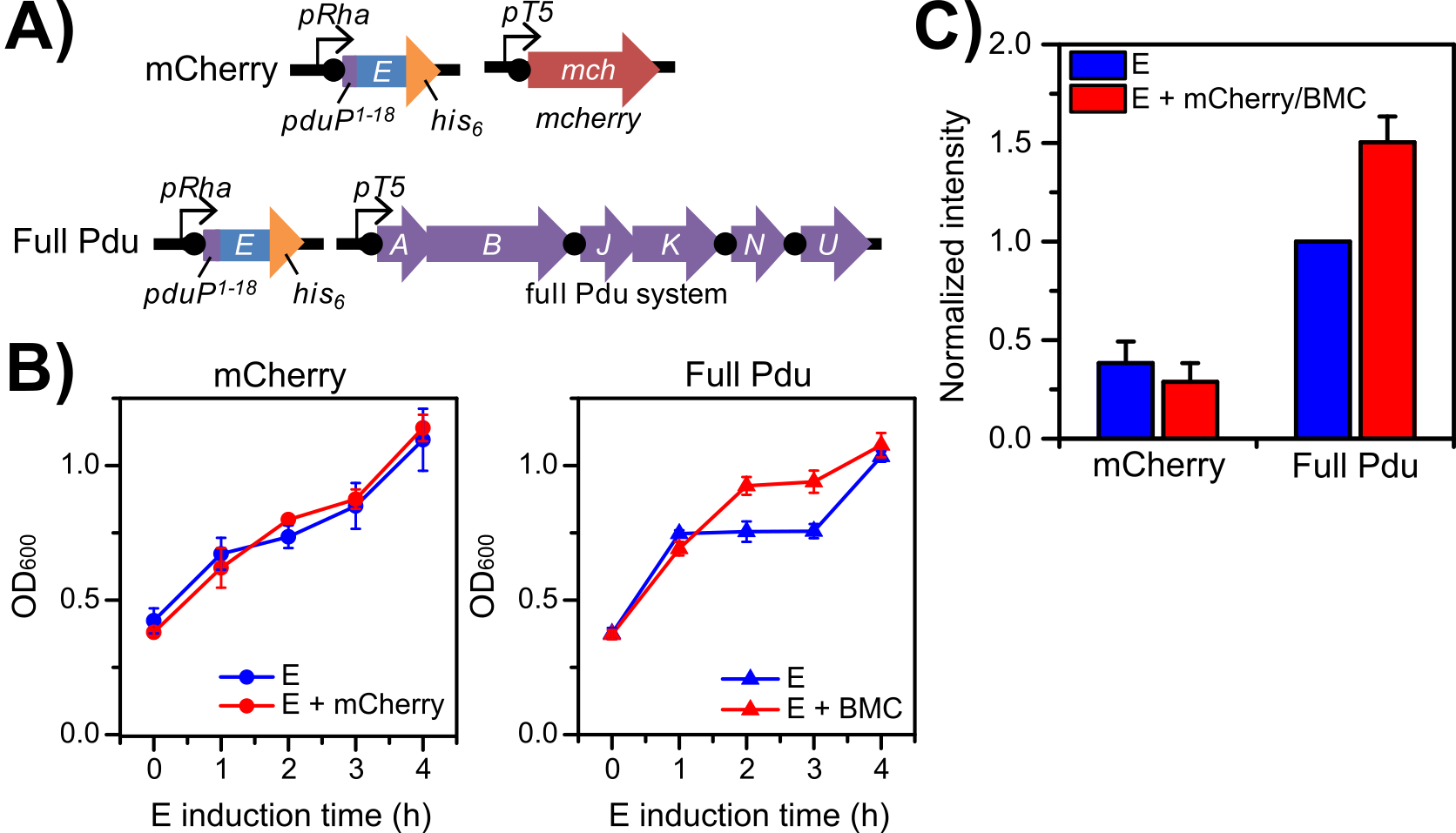 We next examined whether PduP1-18-E is associated with recombinant BMCs in vivo. BMCs were isolated from PduP1-18-E/Pdu BMC cells co-induced with 0.5 mM IPTG (for BMC production) and 0.1, 0.2, or 0.5 mM rhamnose (for PduP1-18-E production) for three hours according to previously documented methods (Sinha et al. 2012). As a positive control, BMCs were also isolated from Escherichia coli cells co-expressing a PduP1-18-tagged mCherry (PduP1-18-mCherry) and Pdu BMCs. To determine the amount of contaminating PduP1-18-E (that is non-specifically purified during the BMC isolation and is not BMC-associated), a mock isolation was also performed using Escherichia coli cells only expressing PduP1-18-E.

Isolated BMCs were analyzed by SDS-PAGE, anti-His6 Western blot, and transmission electron microscopy (TEM) (Figure 4). As expected, isolated BMCs across samples primarily contain shell proteins corresponding to sizes for PduB, PduB’, PduA, and PduJ by SDS-PAGE (Figure 4B). TEM analysis revealed that isolated BMCs from the different strains are morphologically similar with irregular shapes of up to approximately 200 nm in diameter (Figure 4C), similar to other isolated recombinant BMCs observed in prior studies (Parsons et al. 2008; Sargent et al. 2013). Furthermore, SDS-PAGE and Western blot analysis revealed that PduP1-18-mCherry (~31 kDa) or PduP1-18-E (approximately15 kilodaltons, kDa) was co-isolated with appropriate Pdu BMC samples. Very little contaminating PduP1-18-E was found in the mock BMC isolation from the PduP1-18-E only strain, less than 0.8 percent of that isolated from the PduP1-18-E/Pdu BMC strain (Figure 4B). Interestingly, the amounts of PduP1-18-E co-isolated per mg of total BMC protein were very similar in all three BMC samples from the PduP1-18-E/Pdu BMC strain, despite the differences in rhamnose induction concentrations: 12-14 µg of PduP1-18-E per milligram of total BMC protein. This result suggested that PduP1-18-E was fully loaded into the isolated BMCs and increasing rhamnose concentrations, corresponding to increasing expression of PduP1-18-E, did not improve load.

However, of the total expressed PduP1-18-E in the cell lysate, only approximately one percent was found to be co-isolated with BMC samples from the PduP1-18-E/Pdu BMC strain. In the positive control, the amount of PduP1-18-mCherry co-isolated with BMCs was similarly low at 0.25 percent of the total PduP1-18-mCherry in the cell lysate. Given the size heterogeneity and irregular shapes of the isolated BMCs observed by TEM, there is likely poor loading of PduP1-18-tagged protein into BMCs due to poor formation of intact BMCs in recombinant systems. Our current efforts are focused on improving loading of interior protein into BMCs using alternative microcompartment systems and targeting strategies. 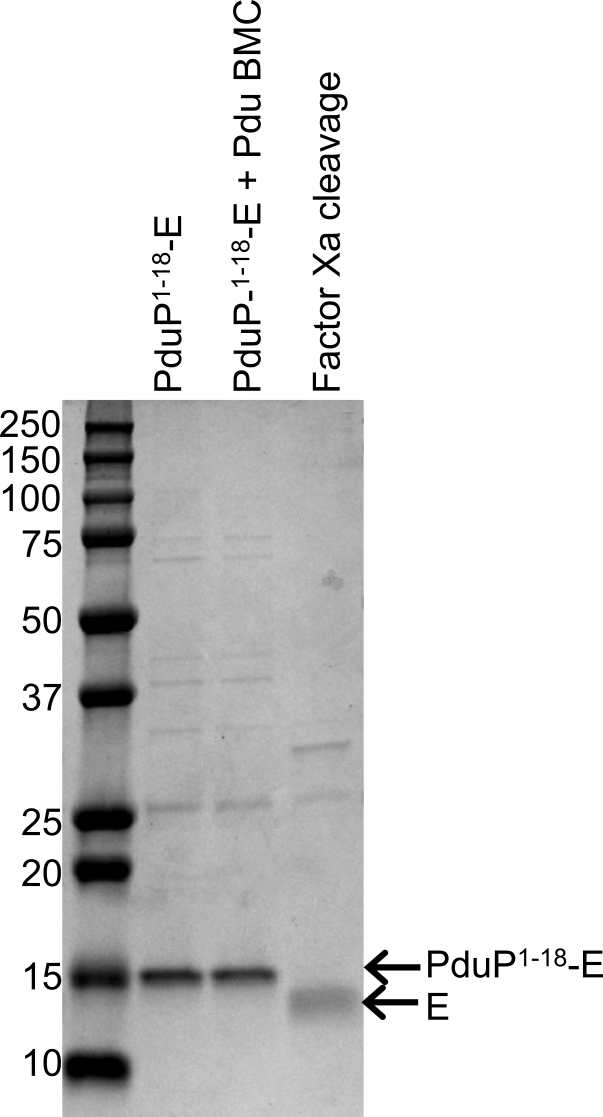 This work demonstrates that re-directed BMC systems can be used to enhance expression of a toxic viral protein, lysis protein E. Our methods can be applied to the purification of other toxic proteins, which are relevant to the biosecurity and biodefense mission goals of the Lawrence Livermore National Laboratory. Broadly, our study has helped to establish engineered BMC systems as a next-generation platform for synthetic biology (Young et al. 2017), which could enable future efforts to develop a novel treatment strategy against antibiotic-resistant bacteria, where bacterial microcompartment encapsulating systems are used to help deliver antimicrobial peptide therapeutics from a genetically-engineered probiotic microbe.

Our research demonstrated the enhanced expression of toxic lysis protein E from bacteriophage phiX174 in Escherichia coli via a re-directed BMC targeting system. Lysis protein E was tagged with various N-terminal BMC targeting sequences, which targeted the protein for association with BMC shell proteins. A PduP1-18-tagged E system appeared to be the best system with the highest expression of the E protein, which was further enhanced by approximately 50 percent by co-expression of Pdu BMC proteins. PduP1-18-E could be optimally expressed at approximately 10 mg/L and purified by Ni-NTA affinity chromatography to 270 µg/L. Non-tagged E was obtained by Factor Xa proteolysis for a final yield of 200 µg of E per liter, almost a seven-fold improvement on values documented in prior reports. Overall, the results demonstrate the utility of re-directed BMC systems to enhance toxic protein yields in recombinant Escherichia coli systems. Our work has contributed to the development of new synthetic-biology capabilities for the Laboratory, as well as future applications towards developing novel countermeasures against biothreat agents.