The goal of this project was to determine if adhesives cast as solid submicron layers directly from the gas phase can replace traditional viscous adhesive prepolymer resins. Capillary forces from liquid-like resins prevent the formation of thin (< 1 µm) bondlines and can damage fragile or porous materials such as foams and aerogels. In this feasibility study, we eliminated liquid intermediates during polymer synthesis by using chemical vapor deposition (CVD) to synthesize adhesive polymer layers directly from gas-phase reagents. Because CVD is a bottom-up growth technique, the thickness of bondlines can be controlled to within a few tens of nanometers. We used synthetic polymer design to control the physicochemical properties of the thermoplastic layers deposited by tuning their chemical composition. Using this approach, we obtained adhesive films 1 µm thick with tunable bonding temperatures and attained successful component bonding at 40°C. This value is close to room temperature and less than half the temperature needed for inducing chemical bonding (150°C) on other polymer epoxy adhesive films previously developed by Lawrence Livermore National Laboratory (LLNL) and external groups. We expect that these ultrathin adhesives applied without liquid intermediates will enable fabrication of fragile parts such as ultra-low-density foam billets to be built into larger assemblies and will serve as an alternative method of fabricating advanced materials for use in high-energy-density (HED) and inertial confinement experimental targets at LLNL.

Adhesives are widely used in manufacturing processes to bond components. Due to their ubiquity in consumer goods, adhesives and sealants form a mature industry with decades of investment in formulation chemistry for various applications. However, nearly all adhesives are based on the application of viscous resins that cure through chemical reaction, solvent evaporation, or cooling of a hot melt. Capillary forces in these liquid-like resins resist the formation of ultrathin (<1 µm) adhesive layers and can cause material to wick into and damage porous materials (e.g., aerogels and foams). Adhesives that can be cast and cured directly as solids without the need for viscous intermediates would therefore be a major advance in the field of adhesive technology.

During this feasibility study, we developed a CVD thermoplastic adhesive that bonds using physical forces rather than chemical interactions. Our goal was to determine the feasibility of relying on the glass transition (T g ) of polymers to achieve component bonding via polymeric chain interdiffusion. Above T g , polymer chains can move cooperatively and the material behaves as a rubber rather than a glass. Polymer chains from two surfaces placed in intimate contact can interdiffuse to form physical entanglements at the interface. Subsequent cooling below T g re-forms the glassy polymer and produces a bond. The advantage of using physical rather than chemical bonds is that polymer T g can be engineered via polymer composition, whereas chemical curing near room temperature requires liquid-phase metal catalysts or two-part formulations.

We attained both goals of the project, first by achieving solid-state polymeric films directly from the gas phase with tunable T g by controlling the polymer composition and, second, by demonstrating that such films bond to each other by thermally driven interfacial chain interdiffusion (see figure). The strength of the adhesive bonding depends on the polymer composition, as measured by mechanical shear tests performed in an Instron universal testing machine. 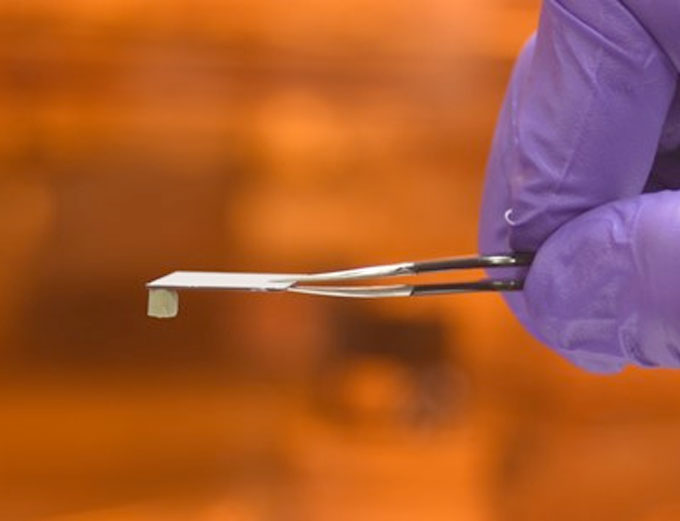 The ability to control the film thickness below submicron levels and foregoing the liquid phase and highly viscous resins eliminates the effects of surface tension from the adhesive bonding process, fulfilling the ultimate goal of the current feasibility study. Future experiments should explore the effects of different times and temperatures on the annealing process, single-side film bonding, and different polymeric formulations.

This achievement in solid-state film polymeric materials supports the NNSA goal of advancing the science, technology, and engineering competencies that are the foundation of the NNSA mission, as well as LLNL's core competency in advanced materials and manufacturing. Adhesive bonds are a necessary part of the fabrication of laser targets used at the National Ignition Facility for HED experiments. This feasibility study has developed "barely-there" adhesive bonds that may improve the quality of the data obtained during experiments, which may in turn contribute to LLNL's stockpile stewardship mission. New inertial confinement fusion target designs that make extensive use of foams and aerogels, as well as additively manufactured components, may also benefit from this adhesive technology.

We demonstrated that it is possible to design solid-state, submicron-thick polymeric adhesives that bond near room temperature via chain interdiffusion. Interdiffusion bonds proved to be strong enough to hold delicate workpieces together and will enable researchers to access entirely new process spaces in the assembly of precision, fragile, and other low-density components. Many of the physicochemical properties of the bond may be tuned through the design of the copolymeric adhesive. Different chemistries should be explored to widen the use of adhesive applications and tailor them to the needs of the Laboratory's mission.