We are developing an interferometer diagnostic capability that could be used at the National Ignition Facility. This capability has the potential to open the door to a range of new experiments involving under-dense plasmas and enable for the first time direct imaging of an entire plasma flow. The diagnostic will have many applications in high-energy-density laboratory experiments that support NNSA missions.

Interferometers are devices used to study and measure waves by creating spatial interference among incident light waves. Interferometers are widely used in the experimental plasma physics community and are a powerful tool for investigating the structure and evolution of under-dense plasmas. Programmatic priority for diagnostic development on the National Ignition Facility (NIF), with the exception of the Optical Thomson Scattering (OTS) diagnostic, is focused on probing hot, dense plasmas produced in capsule implosions via x-ray emission imaging, radiography, and spectroscopy, and by neutron spectroscopy and imaging. Although these techniques are well suited to their purpose, they are typically insensitive to the parameters of under-dense plasmas. The addition of an interferometry diagnostic on the NIF will open the door to a wide range of new types of experiments, such as investigating the formation of collisionless shocks or the dynamics of astrophysical jets. Though an OTS diagnostic that is capable of measuring electron density is planned for NIF, that diagnostic will allow only a single measurement position each shot. An interferometer would enable direct imaging of the entire plasma, allowing rapid identification of the signatures of shock formation and large-scale plasma flow evolution. Furthermore, an interferometer will have many other applications in a wide range of HED experiments of interest, such as probing the density structure of hohlraum fill plasmas, investigating laser heating in magnetized liner inertial fusion (MAGlif) gas pipes, or investigating blow off plasma in direct-drive targets. The interferometer we are developing is a diagnostic module “add-on” that will leverage the existing infrastructure of the OTS system on the NIF, an approach that minimizes cost and risk while taking best advantage of the significant investments that have already been made. The design of the interferometer will be achromatic, such that the probe wavelength may be selected to match the application, optimizing between-probe penetration and the dynamic range of the measurement.

We expect to deliver an operational interferometer diagnostic capability for the NIF. This will include an optical module for the OTS diagnostic load package, which will replace the spectrometer module used in the current design. Probe light will be collected by the existing OTS telescope and fed into the new interferometer module where it will be focused onto the existing streak camera photocathode. This will allow the diagnostic to perform streaked interferometry and capture two-dimensional, spatially resolved interferograms. We aim to demonstrate diagnostics performance in a commissioning shot.

This research supports the NNSA goal of advancing the science, technology, and engineering competencies that are the foundation of the NNSA missions. Specifically, this diagnostic will open up possibilities for a whole new range of experiments to be conducted on the NIF, particularly in discovery science, expanding the Laboratory’s core competency in high-energy-density science and technology.

In FY17, we (1) carried out initial design work on the interferometer instrument and constructed a working prototype; (2) began converting the prototype design to a robust engineered configuration that can be packaged into our optical chassis; (3) began a detailed computational optical modeling of the configuration to look at any further potential optimizations to the design; (4) identified a number of potential paths to delivering the laser probe beam to the diagnostic, all of which are being actively investigated and developed. 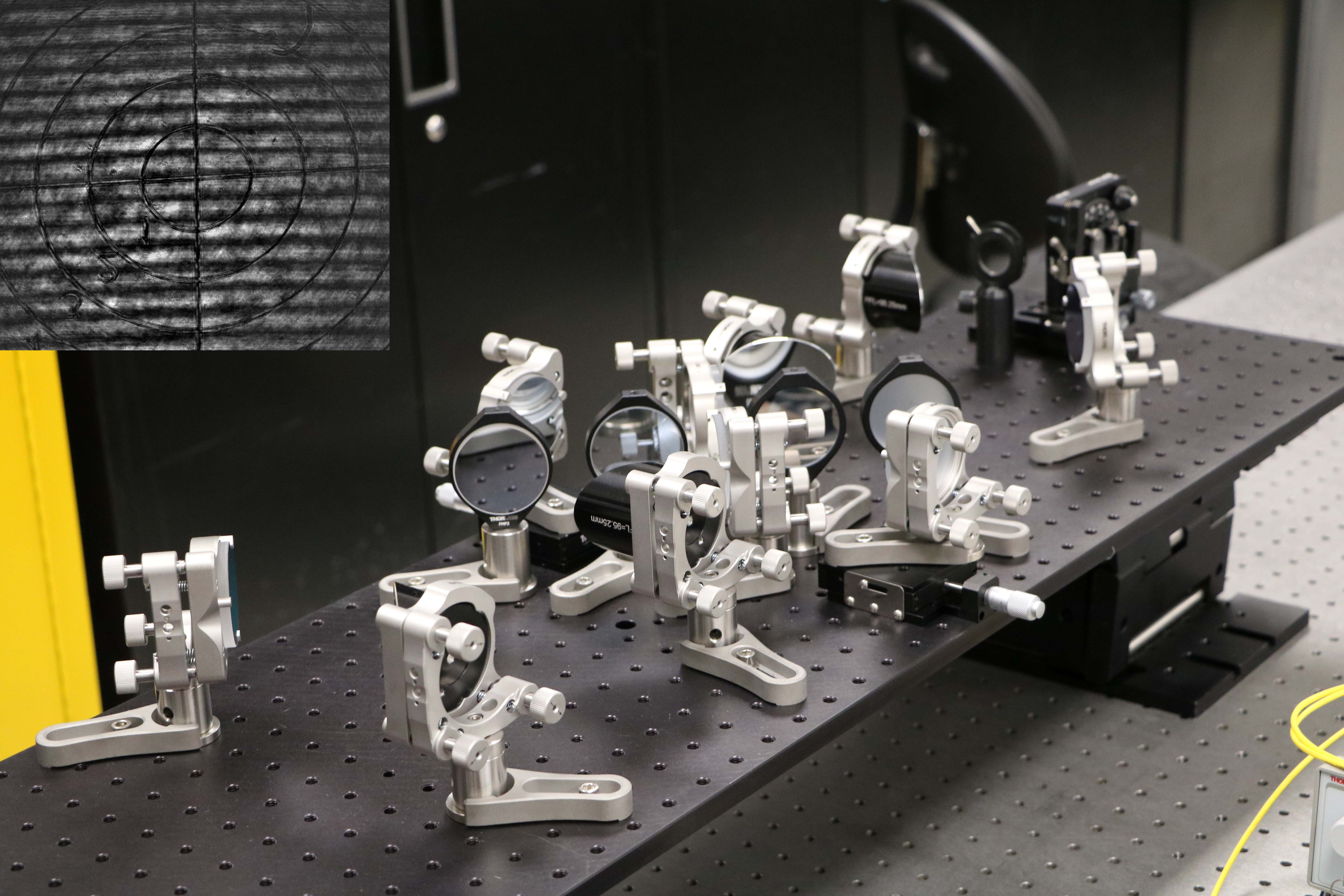 A prototype for the interferometer design has been assembled and tested. The design is now being packaged for deployment as a diagnostic load package for the National Ignition Facility at Lawrence Livermore. Inset: Image of self-referenced interference fringes captured using a fiber-optic laser light source.