Because additive manufacturing (AM) technologies generally rely on point-by-point or layer-by-layer approaches to making complex structures, fabricated parts that include overhanging, spanning, or smoothly curving geometries exhibit layering or step-like artifacts on their surfaces. The goal of this project was to eliminate the requirement for layer-by-layer AM fabrication by developing a photopolymer-based approach that creates whole three-dimensional (3D) structures in a single operation. Following on the first efforts to implement a volume-at-once method using holographic 3D lithography (LDRD project 14-SI-004), our research used an approach related to computed tomography (CT) in which 3D structures are imaged by x-rays from multiple angles. We sought to determine if 3D structures could be fabricated in photopolymer resin by reversing this concept: exposing the volume from multiple angles and creating an accumulated dose of light energy that forms the desired 3D geometry. We concluded that this method, which we named tomographic 3D lithography, is a viable 3D-printing approach. We built and demonstrated a prototype system and produced objects with a broad range of complex geometries. We also conducted a detailed study of photopolymer curing kinetics in the volumetric mode that can guide the design of resins for this and other advanced volumetric 3D-printing approaches.

The paradigm of building from the bottom up, known as AM, is revolutionizing 3D fabrication. The point-by-point and layer-by-layer techniques that characterize AM systems are advantageous owing to their generality, which allows broad geometric versatility. The AM approach offers unprecedented customization and flexibility, where every part can be different from its predecessor. Moreover, complex structures that cannot be produced by traditional subtractive methods have become routinely possible by AM methods.

Along with these advantages, AM methods have imposed their own new set of fabrication constraints. Two of the most significant of these constraints are slow build speeds and layering artifacts. The slow build speeds result from the serial nature of nearly every available AM technique, typically requiring hours to make a structure. Layer artifacts arise from the discretization of a digital computer-assisted-design model into two-dimensional (2D) planes, degrading the surface characteristics of finished parts. This layering yields stairstep artifacts on parts' surfaces and impos­es difficulties fabricating overhangs, spans, and re-entrant geometries.

Virtually all current AM fabrication approaches, from stereolithography (Bártolo and Gibson 2011) and direct ink writing (Lewis and Gratson 2004), to selective laser melting (Yap et al. 2015), require a 3D computer model to be “sliced” into 2-D planes or layers, and the final 3D part to be built up as a sequential layering of these 2D planes. Although some approaches can generate 3D structures without requiring planar slicing [e.g., notably HRL Laboratory's fabrication of lattices via crossed beams (Schaedler et al. 2011)] and photonic crystals produced by interference lithography (Lin et al. 2009), these approaches are limited to manufacturing periodic structures, with one of the dimensions substantially smaller than the other two other. Even Carbon Incorporated’s Carbon3D “continuous liquid interface" process (Tumbleston et al. 2015) still requires sequential fabrication based on 2D discretization.

The capability to produce 3D structures in a volumetric unit operation (i.e., “volume-at-once” fabrication) remained elusive until recently, when the Lawrence Livermore National Laboratory's holographic AM team demonstrated the first parts produced in this way (Shusteff et al. 2016). This was accomplished by superimposing multiple light patterns illuminating the photosensitive resin at right angles to one another. Our initial results showed that the geometries of these volume-at-once structures are limited due to the limited diffractive angle available from the optical system. The major objective of this project, therefore, was to determine whether completely arbitrary 3D geometries can be fabricated by tomographic lithography and to assess the geometric versatility, speed, and resolution limits of this technique.

The tomographic-lithography concept directly addresses the geometric limitations of AM methods by rotating the build volume while dynamically adjusting the illumination field. Similar to x-ray CT reconstruction, in which a 3D geometry is calculated by combining images taken from multiple angles, tomographic lithography inverts the concept to build up 3D optical energy distribution by exposing a photopolymer to a large number of optical patterns from several angles. This is a time-multiplexed version of the multibeam superposition approach. We accomplished this by rotating a cylindrical resin container while illuminating it with a time-varying exposure beam that projects a pattern synchronized to the rotation (Figure 1). The image source is a standard digital light-processing (DLP) image projector, using its blue-light channel (wavelength approximately 440–480 nm). The time-sequenced light fields required to form the desired 3D geometry are generated by using a gradient-descent optimization algorithm that calculates the optical projection at up to 1,400 different angles. 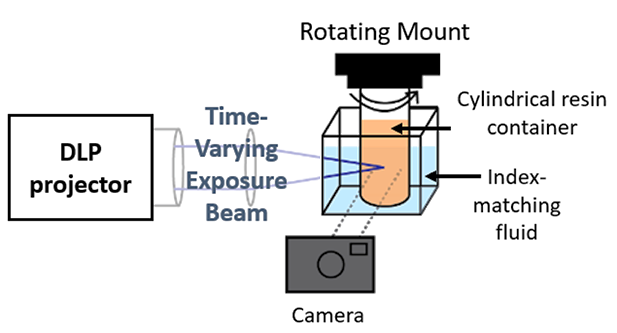 Figure 1. A schematic of the three-dimensional tomographic-lithography system, showing the illumination from a single direction interacting with a rotating resin container. A camera monitors part formation and curing in real time.

Because the energy dose takes time to accumulate (2–3 min), a more viscous resin is required to prevent part movement and limit diffusion. A typical resin is composed of a 3:1 (by weight) mixture of bisphenol-A-glycrolate (BPA) and low-molecular-weight (Mn = 250) polyethylene glycol diacrylate (PEGDA), with a 0.5–1.0 percent photoinitiator such as camphorquinone or Irgacure 819. We were able to produce objects with a wide variety of geometries using this approach (Figure 2), including parts with unsupported internal structure, hollow internal voids, lattice structures, and complex non-rectilinear geometries.

During the development of this system, we explored the parameters of photochemical curing in the “volume-at-once” mode using the holographic multi-beam superposition system developed by Lawrence Livermore National Laboratory. The very fast (1 to 20 seconds) exposures in this system enabled a fast and flexible study of a range of key parameter combinations, including photoinitiator concentration, light intensity, exposure time, and the role of oxygen inhibition. These results directly informed the design of resins and exposures in the tomographic-lithography system (Shusteff et al. 2017). The combined results of this work were presented as an invited talk at the International Conference on Additive Manufacturing and 3D Printing at the University of Nottingham in July 2017.

Figure 2. A representative range of geometries that can be fabricated by the tomographic-lithography method. These include (L to R) the ball-in-a-cage showing a disconnected internal structure, a sphere with an internal void, an octet-truss lattice geometry, and the complex shape of the Eiffel tower. All parts demonstrate layerless fabrication of fully arbitrary 3D geometries. The 2-mm scale bar applies to all four images.

By demonstrating a previously unachievable 3D-fabrication capability, this project supported the Laboratory’s core competency in AM. In addition to helping maintain its leadership role in the field of AM research and development, our work made important contributions to the Laboratory’s laser/optical science and technology research capabilities.