The New Frontier of Nuclear Science: Nuclear Reactions and Radiochemistry at the National Ignition Facility

The goal of this project was to develop platforms for measuring nuclear reaction rates under plasma conditions at the National Ignition Facility. Nuclear reactions that occur in high-energy-density plasmas are critical to the nation’s Stockpile Stewardship and Nuclear Forensic programs, but they cannot be measured at traditional neutron sources. By developing methods for adding target materials to ignition capsules (as well as enhanced collection of solid debris) we are now able to measure neutron reaction cross sections at the National Ignition Facility. Future experiments using these platforms will include neutron-activation measurements that were previously obtained during the Nuclear Test Program but have not been measured since. Our methodology can also be used to determine stellar nuclear reaction rates critical to the study of the process of nucleosynthesis in stars.

The future of nuclear science depends on our ability to measure nuclear reactions in neutron-rich, high-energy-density (HED) plasmas found in thermonuclear explosions, stars, and other astrophysical environments. Nuclear reaction rates in HED plasmas at temperatures in the kiloelectronvolt (keV) range are critical to the interpretation of radiochemical signatures from post-detonation debris in the Stockpile Stewardship Program (SSP) and Nuclear Forensic Program (NFP). However, very little data is available about the contribution of nuclear reactions within short-lived, excited nuclear states and the multiple production pathways that are integral to the HED plasma environment.

One useful concept in describing the absorption of radiation in matter is the cross section; it is a measure of the probability that an energetic photon (such as a gamma ray) interacts with matter by a particular process. The concept of a neutron cross section is used to express the likelihood of an interaction between an incident neutron and a target nucleus. The likelihood of radiative capture of a neutron is represented by the radiative neutron capture cross section. Nuclear reactions are described by specifying the type of the incident radiation, the nuclear target, the products of the reaction, the probability that the reaction will take place (i.e., the cross section), and the distributions in energy and angle of the reaction products. Statistical modeling currently used to calculate neutron-capture cross sections under stellar conditions can result in uncertainties on the order of 100 to 300 percent for neutron-gamma ray (n,gamma) neutron-activation reactions (Kaeppeler 2011).

Due to the cessation of nuclear testing, experimental facilities where neutron-activation reactions can be studied in a plasma environment no longer exist. As an indirect result, such studies encounter large uncertainties for measurements of reaction cross sections necessary for the interpretation of post-reaction nuclear data. A significant contributor to this issue is the dependency of final reaction products produced in an HED plasma on (n,gamma) cross-sections of unstable nuclear states in the keV-energy range. These data are difficult to measure in a particle accelerator, but the National Ignition Facility (NIF) is ideally suited for such testing because it is able to generate the short, intense neutron pulses created over the entire energy range of prime interest to these programmatic areas.

A similar situation exists in the study of charged-particle nuclear reactions integral to stellar nucleosynthesis and solar neutrino production. Accelerator-based measurements do not extend to the energy range consistent with conditions found in the core of a star (less than 100 keV) due to exponentially decreasing reaction cross sections as a function of energy, nor are these measurements performed in a plasma environment. The results must be corrected for differences in electron screening between the dense, stellar interior and beam-target experiments (Boyd 2009). Performing high-fidelity measurements of stellar reaction rates at the NIF dramatically increases the reaction rate due to the convergence of the ignition capsule and the high-temperature and high-density conditions closer to those in stellar interiors, thereby requiring less extrapolation from the experimental parameters to actual stellar conditions.

The explosive properties of ignition of a NIF capsule (i.e., large neutron yields, short burn times, and small, compressed volumes) produce the most intense neutron fluence (i.e., the number of neutrons per square centimeter) in the world. These unique explosive properties can be leveraged to fill gaps in the nuclear data requirements of several Lawrence Livermore National Laboratory mission areas, including those of fundamental research in stellar astrophysics.

The research focus areas that this project addressed include (1) neutron-induced reactions on short-lived, excited nuclear states in support of the SSP and the diagnostic interpretation of radiochemical data; (2) complex reaction networks and the effect of chemical fractionation of debris data in support of the NFP; and (3) charged-particle reactions in a true plasma environment as a measure of stellar reaction rates at energies and densities more closely resembling stellar interiors. These research areas all require the development of new methodologies for adding materials (including radioactive species) to NIF capsules; the design of platforms for tailoring neutron outputs; and analytical characterization of NIF reaction debris products. Once these methods are developed, we can utilize NIF shots to measure nuclear reactions in previously inaccessible energetic regimes.

Our project’s research plan consists of several objectives that tie into the focus areas listed above.

Objective 1: Develop methods for loading small numbers of target atoms into NIF capsules, including the use of radioactive species. This is perhaps the most important task as measuring cross sections for any programmatic area will require the use of doped capsules. This methodology has been developed through the use of a radiochemistry micro-injection system that enables small quantities of materials of interest to be introduced into a NIF hohlraum via injection through the fill-tube hole.

Objective 3: Focus on the debris ejected from a NIF shot to understand fractionation processes on a fundamental level. This is crucial to measuring neutron cross sections, especially if corrections must be made to account for debris losses caused by the fractionation of tracer and analyte species as they condense out of the plasma. This was addressed through the study of fission products that were produced from 238U isotope added to either the capsule (Figure 1) or hohlraum (Figure 2). 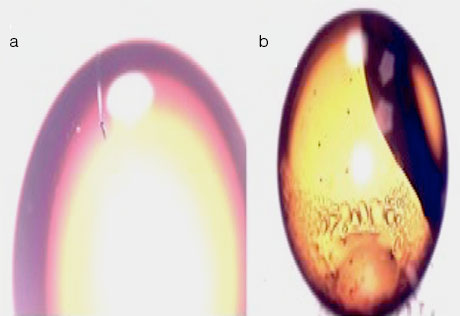 Figure 1. (a) Micro-capillary inserted through the NIF capsule fill-tube hole. (b) Capsule after filling. After the solution evaporates, a layer of the material of interest is deposited on the inner surface of the capsule. 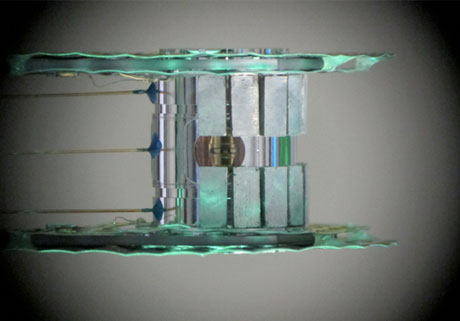 Figure 2. NIF target assembly (hohlraum) with thulium foil strips added to the exterior. The foil strips are 0.5−1.0 mm thick and are placed around the circumference of the hohlraum. The additional mass enhances debris collection.

Objective 4: Explore tailoring neutron outputs to measure nuclear reactions in the sub-megaelectronvolt range, a region of interest to all three research focus areas. Neutron transport modeling was performed for a series of experimental configurations where different materials were fielded in the NIF chamber during fusion shots and subsequently evaluated for neutron activation products. The experimental data were compared with calculations to validate a predictive model that will enable us to design future experiments for irradiation of materials at lower neutron energies.

Objective 5: Extend debris collection at NIF to low-impedance stellar reaction products. 7Be and 10Be isotopes were added to plastic NIF capsules to quantify collection efficiency and fractionation of added dopants.

Objective 6: Use all of the developed platforms to measure the 13C(n,alpha)10Be reaction as part of a staged approach to measure stellar reaction rates. 7Be isotope was added to capsules that also contain a layer of 13C in order to better measure the reaction cross section. Through the development of these capabilities, initial experiments to measure cross sections across the SSP, NFP, and nuclear astrophysics programs will serve as a benchmark for establishing the contribution of HED plasmas to nuclear reaction rates.

This research addresses the Laboratory’s nuclear weapons stockpile stewardship mission area and supports the Laboratory’s core competencies in nuclear, chemical, and isotopic science and technology. The experimental platforms developed over the course of this project will provide the basis for measurements of nuclear data in a plasma environment, which will in turn positively impact the uncertainties and interpretation of radiochemical data obtained during historic nuclear tests. The objectives of this project were designed around research priorities identified by the Laboratory, specifically to fill gaps in "key nuclear science areas such as plasma nuclear science, fractionation in nuclear decay, nuclear stability, and short-lived nuclei." The impact of this research includes potential collaborations with the academic community by establishing the capability for external users to use NIF to perform experiments. This will in turn strengthen the pipeline between the Laboratory and nuclear physics and radiochemistry university programs.

With the development of NIF capsule doping and debris collection, we are now planning for future experiments to measure nuclear reaction cross sections for the SSP. The program has already committed to supporting future shots to measure the 89Y(n,2n)88Y and 88Y(n,2n)87Y reactions, which are both important for interpretation of nuclear test data. These experiments will require the development of ultra-clean chemical procedures for producing dopant materials, but the rest of the required elements have already been performed under this project. The SSP is also interested in (n,gamma) measurements that may use the neutron-tailoring models that were developed under this project. 13C isotope capsules will be shot in 2019, and those results will be used to plan future stellar-relevant reaction measurements at NIF.