Recently, there has been growing interest in potential uses of gene drives, or mutagenic chain reactions, to effect genetic modifications in wild populations. We computationally demonstrated the feasibility of a novel gene drive design that includes a mechanism capable of later being used to reverse the effect of the drive. Briefly, the “forward” action of the drive proceeds by forcing a genetic change through the population, while the “reverse” action propagates an epigenetic modification that silences the newly introduced genetic elements. These results have implications for the design of controllable gene drive mechanisms that may eventually prove sufficiently safe for uncontained release.

Geneticists have long discussed the possibility of using “selfish” genetic elements to spread desirable alleles (variant forms of genes) through or eliminate undesirable alleles from a wild population of organisms that are significant from an economic or medical perspective (Burt 2004). Until the discovery of CRISPR/Cas9 genome editing, however, and the fruit fly experiments of Gantz and Bier (Gantz 2015), many proposed mechanisms for driving such an element through a population failed to achieve high efficacy. Since that time, there has been a rapid rise of interest, particularly among insect biologists, in using gene drives for population control of agricultural pests or suppression of human disease vectors (Bull 2017).

Anticipating a need for better tools to understand the impact of an uncontained release of engineered organisms, we conducted this feasibility study as a means of applying Livermore's strengths in computational modeling and simulation to the problem of gene drive propagation. To our knowledge, this project represents the first use of Laboratory supercomputing capabilities for simulation of arthropod population dynamics.

In 2016, the scientific conversation surrounding gene drive technology shifted to the possibility of "reversal" drives (Champer 2016) and more precise mechanisms for controlling the propagation of engineered genetic elements released into a wild population (Noble 2016). In collaboration with scientists from the University of Pennsylvania in Philadelphia, we developed the framework for a new gene drive design that includes the option to introduce an epigenetic modification, which cancels the effect of the drive and spreads at a rate comparable to that of the drive itself. We believe this type of drive design may be useful in producing "biosafe" gene drives whose consequences can be mitigated in the event of unforeseen effects.

We used a Wright-Fisher model, which captures many of the key features of genetic drift and has played an important role in the development of population genetics, to simulate a population of 50,000 organisms reproducing over 150 generations, in a genetic background that was static excluding the influence of the mutagenic chain reaction (MCR) allele. We identified four primary allelic states: (1) wild-type, (2) the gene drive (MCR) allele, and alleles with resistance to the MCR, produced by erroneous non-homologous end joining (NHEJ) repair of one or more cut sites, that from a fitness standpoint are either (3) costly or (4) cost-free.

In agreement with previous work, we found that drive propagation and stability is enhanced when additional guide ribonucleic acids or gRNAs—short synthetic RNAs composed of a “scaffold” sequence necessary for Cas9-binding and a user-defined ∼20 nucleotide “spacer” or “targeting” sequence which defines the genomic target to be modified—which are targeted to multiple cut sites are included in the MCR cassette (see Figure 1a), when the fitness cost of carrying the MCR allele is lower (see Figure 1c). (A cassette is a type of mobile genetic element that contains a gene and a recombination site. Each cassette usually only contains a single gene and tends to be very small; on the order of 500–1000 base pairs.) Extending previous work, we found that that the stability of the MCR allele in the population is significantly impaired by even relatively small decrements in its fitness relative to the wild-type (see Figure 1d). As expected, we determined that targeting the MCR cassette to genes whose disruption carries a high fitness cost protects against the formation of resistance (Esvelt 2014). More interestingly, however, when the rescue of the essential function of the wild-type by the MCR allele is incomplete, the drive is more stable when the targeted gene is likewise not perfectly recessive lethal (see Figure 1b). 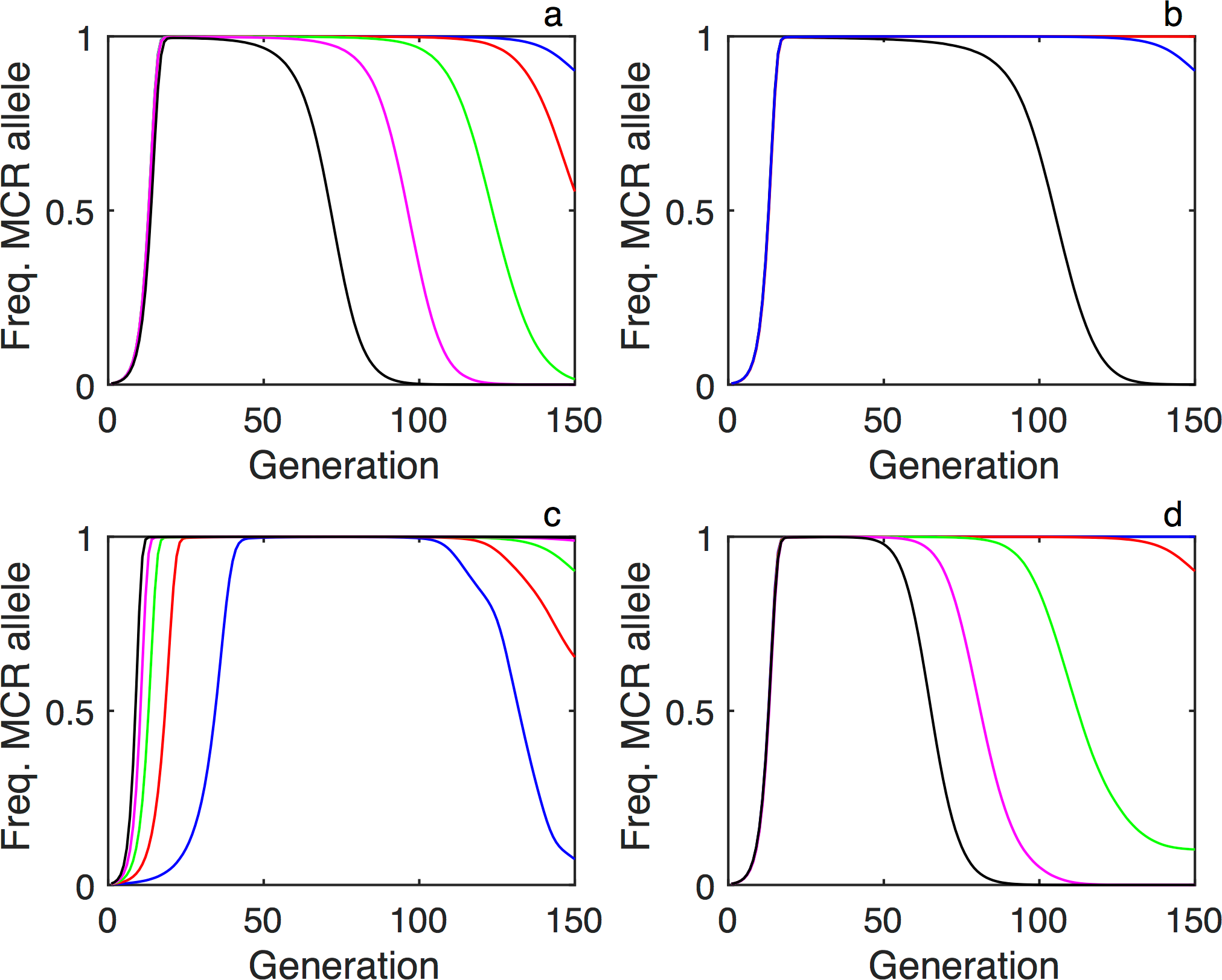 To study mechanisms of gene drive reversal and control, we looked to existing biological pathways that are designed to safeguard the genome from naturally occurring sources of genetic damage. In insects, Piwi-interacting RNAs (piRNAs) play this role by suppressing DNA damage due to the P element (commonly used as mutagenic agents in genetic experiments with Drosophila—a genus of flies) and other invasive mobile DNA elements, called transposons (Khurana 2011). piRNAs are short (24–32 nucleotides), endogenous RNAs that originate from heterochromatic piRNA clusters that silence gene expression by hybridization to transcripts (Ishizu 2012). Importantly, however, scientists have demonstrated that maternal inheritance of piRNAs via the egg cytoplasm can also convert previously dormant transgenic loci into piRNA-producers (Hermant 2015). This silencing phenomenon can propagate exponentially across generations, in an effect called a paramutation (an interaction between two alleles at a single locus, whereby one allele induces a heritable change in the other allele) (see Figure 2). In 2012, scientists demonstrated that this effect could silence the expression of an exogenous transgene for 50 generations (de Vanssay 2012). 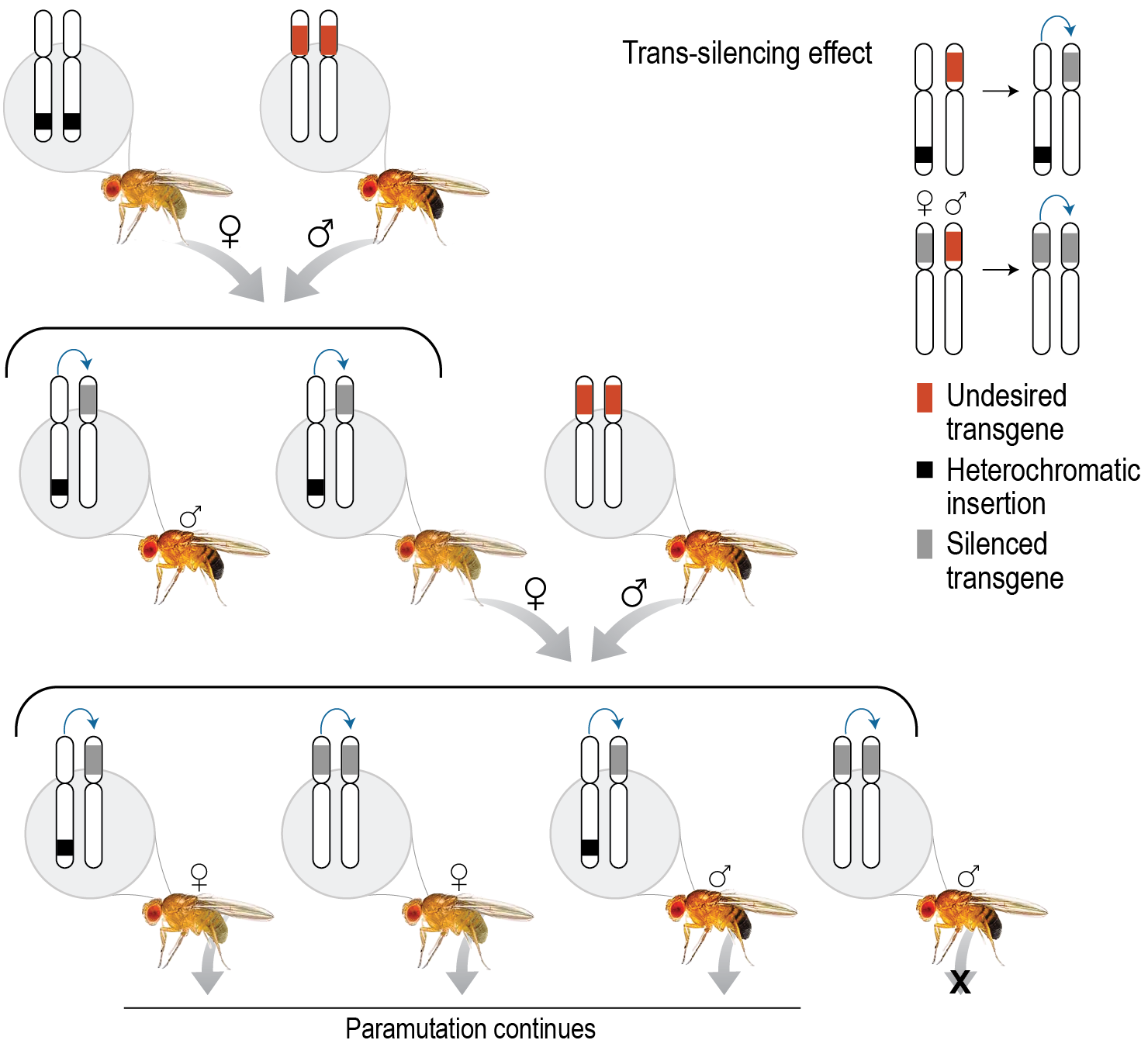 Figure 2. Paramutation—an interaction between two alleles at a single locus, whereby one allele induces a heritable change in the other allele—inactivates transgenes (exogenous DNA sequences introduced into the genome of an organism). Clusters of the largest class of small non-coding RNA molecules expressed in animal cells—piRNA—in heterochromatic regions can be modified (black) to carry sequences homologous to those of an undesired exogenous transgene (red). The clusters generate piRNAs that produce a trans-silencing effect (inset), suppressing expression of the transgene in the germline and creating a paramutation at its locus (gray). Experiments also suggest that cytoplasmic piRNAs can help convert non-paramutated loci when transmitted via the female germline. The original heterochromatic insertion undergoes simple Mendelian inheritance.

We modified our MCR simulation to determine whether paramutations might be used to counteract the effect of a gene drive. Following de Vanssay (2013), we assumed that production of MCR-homologous-piRNAs and suppression of Cas9-mediated gene conversion could be accomplished in the germline by either (1) the presence of a heterochromatic insertion, used to initiate the paramutation process, or (2) the inheritance of MCR-homologous-piRNAs from the maternal cytoplasm.

We found that paramutations can rapidly silence the expression of an MCR cassette. Figure 3 shows four gene drive designs, which, despite varying fitness costs associated with the MCR allele, all reach fixation within thirty generations. A piRNA-generating heterochromatic insertion added to a small fraction of the population at that timepoint spread rapidly through the population and effected germline silencing of the drive in all cases where the MCR cassette carried a fitness cost; indeed, the paramutation even spreads, albeit at a slower rate, through the population when the MCR cassette is cost free. This figure indicates the overall level of transcriptional activity associated with the drive; however, if the MCR cassette retains some fitness cost in the silenced state, the genome is also eventually purified of the engineered genetic elements (data not shown). 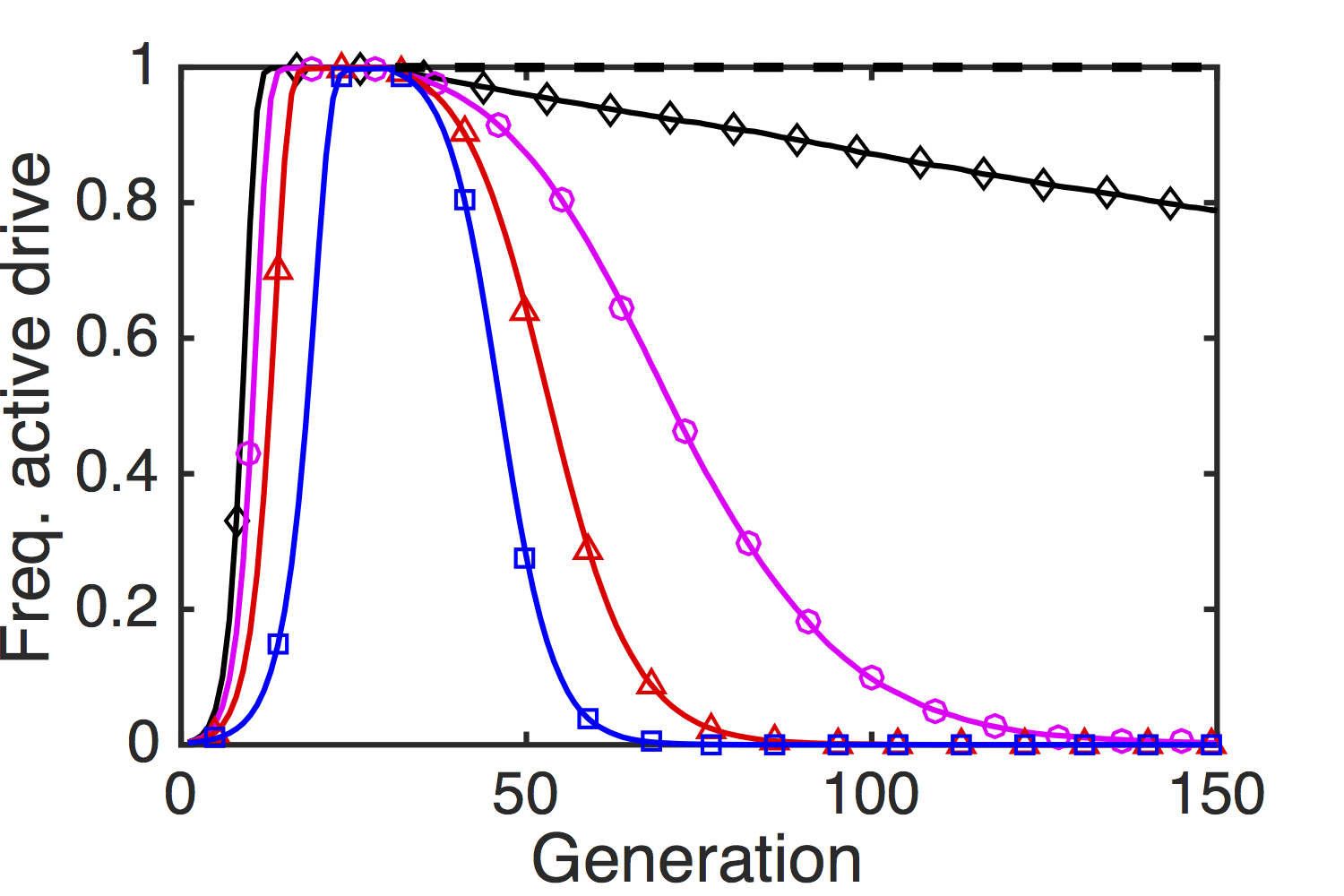 Figure 3. Reversal of gene drive activity by paramutation, which is an interaction between two alleles at a single locus, whereby one allele induces a heritable change in the other allele. Prevalence of an active (i.e., not epigenetically silenced in the germline) MCR allele with n=5, s=1.0, and d=1.0, introduced into a population at frequency 0.2% at generation zero, with a piRNA-producing heterochromatic insertion added at the same frequency at generation 30. Results are shown for different fitness costs associated with the active MCR allele: 0 (black diamonds), 0.1 (magenta circles), 0.2 (red triangles), and 0.3 (blue squares). All drives shown remain fixed in the absence of an induced paramutation (dashed line).

As even highly efficacious MCR designs can be reversed with the addition of a heterochromatic insertion at a frequency similar to the original, unwanted gene-drive introduction, this may represent an effective strategy for creating novel drives with added protection against undesirable effects in the environment.

Our project has contributed to the Lawrence Livermore focus area of chemical and biological security, and builds a novel capability in modeling insect genetics. This work also supported the genesis of a new collaboration with the University of Pennsylvania. Results will enable the Laboratory to better respond to federal sponsor needs as they relate to entomology and novel methods in molecular genetics.

As genetic modification of wild populations become more feasible and cost-effective, computational science has an important role to play in developing basic population dynamics models into a predictive framework that can anticipate both the risks and benefits associated with releases of organisms into the environment. We look forward to deploying Lawrence Livermore supercomputing capabilities to aid experimental efforts currently being germinated with the support of both public and private sector funders.

Ishizu, H., et al. 2012. “Biology of PIWI-interacting RNAs: New Insights into Biogenesis and Function Inside and Outside of Germlines.” Genes and Development 26:2361–2373.