Thermionic electron emission from surfaces is important in a variety of plasma sources and applications. Examples include tokamak divertor plates, emissive probe diagnostics, thermionic discharges, thermionic spacecraft tethers, and thermionic energy converters. But the interaction of plasmas with thermionic cathodes is not fully understood. It has generally been assumed that thermionic cathodes in current-limited conditions have a space-charge limited (SCL) sheath. During our project, we showed (on theoretical grounds and by simulations) that a steady SCL sheath should never exist. Whenever an SCL sheath begins to form, charge-exchange ions born within its potential valley will be trapped and accumulate. In planar geometry the trapped ions spread across the plasma toward the anode, leaving behind an inverse cathode sheath. This is significant because the dynamics of particles in the plasma and their fluxes to the surfaces are very different when the sheath is inverse versus SCL. Inverse sheaths could find use in mitigating plasma–wall interaction damage in magnetic fusion. In curved geometry situations, such as a filament in an unmagnetized plasma, the trapped ion cloud is predicted to grow radially in both directions, to be expelled when it reaches the cathode, and reform periodically. This is likely to explain filament-induced current oscillations in experiments.

Understanding plasma–surface interaction is crucial to many laboratory and astrophysical plasma physics research areas, including magnetic fusion energy (Robertson 2013). In general, a “sheath” potential forms to control the flow of plasma particles and energy to the surface. For the last century it has generally been assumed that the sheath potential is negative, meaning the surface potential is below the plasma potential, whether it emits electrons or not (Langmuir 1929). We discovered that if the surface emits an intense flux of thermionic electrons, the sheath potential may become positive, thereby changing the dynamics of plasma particles and their fluxes into the surface (Campanell and Umansky 2016). Our goal for this project was to improve the understanding of this “inverse regime” through both theoretical modeling and developing novel simulation codes. Previous analysis was limited to one-dimensional (1D) situations where a plasma contacts an electrically isolated surface. In many plasma devices the emitting surface is biased or electrically connected to other surfaces. Examples include tokamak divertor plates, thermionic discharges, thermionic converters, thermionic spacecraft tethers, emissive probes, and the Large Plasma Device. To study such configurations, we set up simulations with biased electrodes. We confirmed that there is a biased inverse mode where the potential of the plasma is below the potential of the cathode and anode. It differs drastically from the conventional models of hot-cathode sheaths in use today (Takamura et al. 2004). Also, we began to develop multidimensional simulation models using the BOUT++ framework to solve the kinetic equations in curved-geometry coordinate systems. When optimized, this will enable efficient simulation of the sheaths around thin wire filaments, cylindrical emissive probes, and spherical dust particles.

Thermionic current flow through plasmas is one of the oldest and most important fundamental problems in plasma physics (Langmuir 1929). Thermionic cathodes generate many of the plasmas used in today’s laboratory experiments. It is known that when the thermionic flux is intense enough, the current saturates, presumably due to formation of a potential barrier in the cathode sheath. The sheaths are difficult to measure in experiments, so computer-simulation models can provide valuable insights. Thermionic discharges were simulated with particle-in-cell (PIC) codes in the past (Greiner et al 1993), but the sheath modes were not fully understood. Also, sheaths in PIC simulations are often obscured by numerical noise.

We developed a novel continuum kinetic-simulation model of a thermionic discharge. Rather than tracking particles, the code solves for the particle-distribution functions using a kinetic equation. Noise-free data is produced at each time-step, allowing the plasma-sheath coupling to be studied in unprecedented detail. Boundary conditions enforce a fixed bias between the electrodes. Thermoelectrons emit from the left boundary with typical hot-cathode temperatures. The general effects of electron and ion collisions with neutral atoms are accounted for in the kinetic equation.

Figure 1. Thermionic discharge simulations. (a) Potential distributions with classical, space-charge limited (SCL) and inverse-cathode sheaths are observed. However, the SCL is found be unstable and transition to the inverse (see Figure 2). (b) Comparison of the distribution functions of plasma particles when the sheaths are classical and inverse. The inverse mode is important because the distributions of electrons (fe) and ions (fi) in position and velocity space differ from what is predicted by classical and SCL-sheath theories.

The inverse sheath contradicts the conventional theories of hot-cathode sheaths (Langmuir 1929; Takamura et al. 2004). They assume that when the current is limited, the sheath should take the SCL shape (shown in Fig. 1a), where the interior plasma potential is above the cathode potential. It is crucial to determine why the inverse sheath forms because it changes the entire plasma dynamics. For example, a classical or SCL sheath accelerates positive ions into the cathode, while the inverse sheath confines ions in the plasma.

Figure 2 illustrates what happens whenever an SCL sheath begins to form in our simulations. 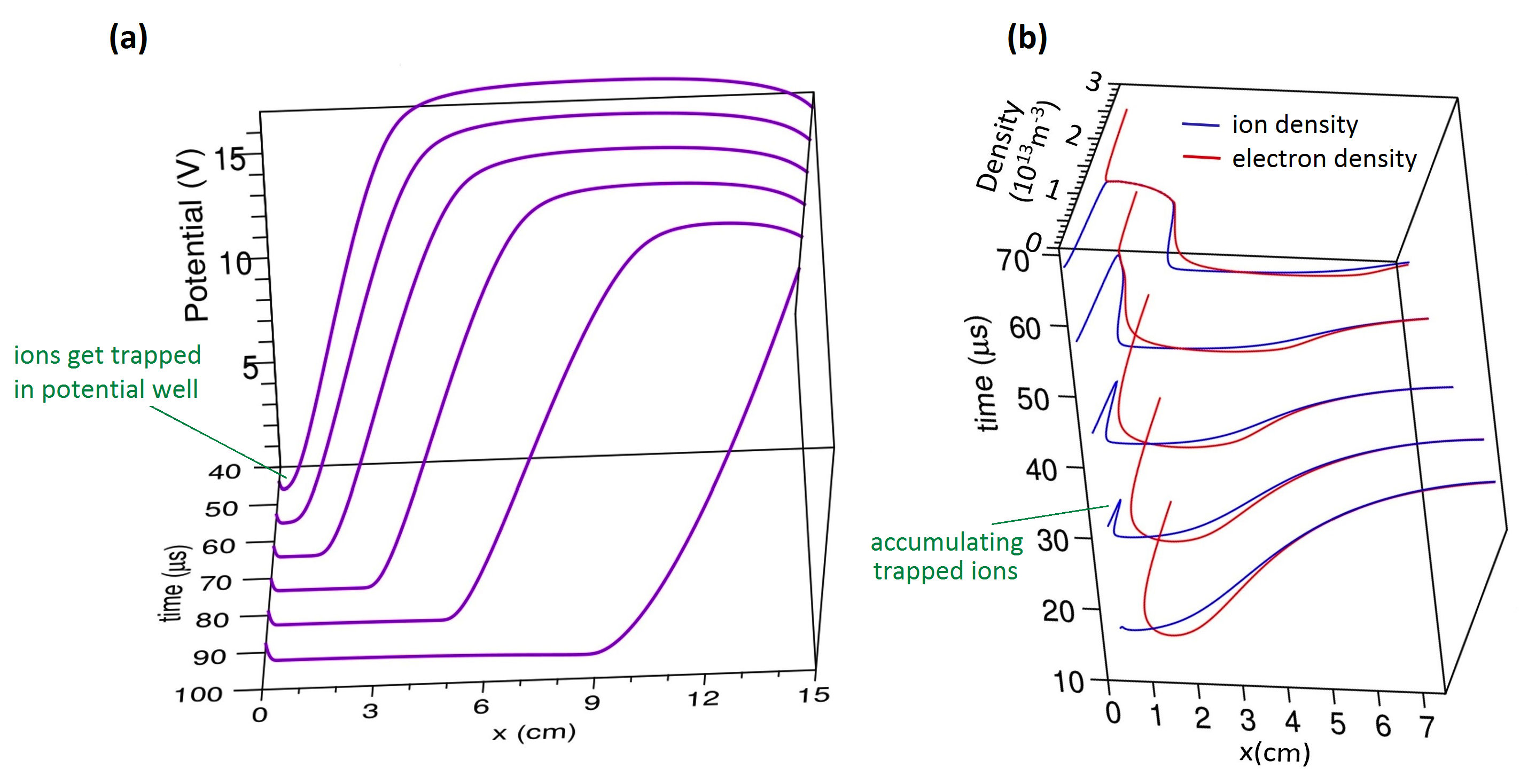 Figure 2. Breakdown of the conventional space-charge limited (SCL) sheath theory. An SCL sheath is present in the earliest snapshot of potential (a). The potential then collapses across the plasma in time, leaving behind an inverse sheath at the cathode. This occurs due to the trapping of ions in the potential valley. The ion-trapping is evident by the growing ion-density peak in the charge distributions (b).

Figure 2a shows that the potential spontaneously flattens across the plasma, transitioning to the inverse mode. The transition occurs because some of the ions passing through the SCL sheath lose energy by collisions and are trapped in the potential well. Figure 2b shows a peak of ion density emerging near the cathode due to trapped-ion accumulation. When the ion-density peak reaches the electron density, a new neutral plasma is created. It grows toward the anode and eventually fills the gap.

Why was the inverse mode not captured in past hot cathode sheath theories? Because SCL models (Takamura et al. 2004) did not consider ion collisions. Similarly, SCL sheaths were reported in recent simulations of the tokamak divertor sheath with thermionic emission (Komm et al. 2017), but collisions were omitted and no ions were trapped. Since collisions are always present in experiments, our study suggests that inverse modes should inevitably form. This will profoundly alter the plasma–surface interaction. One effect of inverse sheaths is that ion-impact energies are reduced, thus minimizing sputtering. Also, the cold emitted electrons dominate the plasma temperature near the surface. They might cool the plasma to a sufficient extent to help induce detachment, thereby protecting the divertor plates from the high heat flux. Sputtering and heat flux are among the most serious obstacles to constructing fusion reactors (Naujoks 2013).

Our planar simulation code was able to run on a single processor since only one spatial dimension and one velocity dimension were needed to model the sheaths. There are some important plasma-facing surfaces, such as probes or dust grains, where the sheath is no longer planar as the orbits of plasma particles around the object play an essential role (Robertson 2013). At least three dimensions must be considered: radial position, radial velocity, and tangential velocity. To simulate such cases, we began development of a parallelizable code using the BOUT++ differential-equation solver (Dudson et al. 2009). The code name comes from “BOUndary Turbulence.” Although BOUT++ has been used for years, it was primarily for solving plasma fluid equations that do not include sheaths. We applied BOUT++ to solve the kinetic equation for the first time. The code was validated by simulating a 1D planar plasma bounded by floating walls. The data shown in Figure 3 agrees with simulations of the same plasma by our serial code. The potential amplitude and spatial width of the sheaths agree with theoretical models (Robertson 2013). 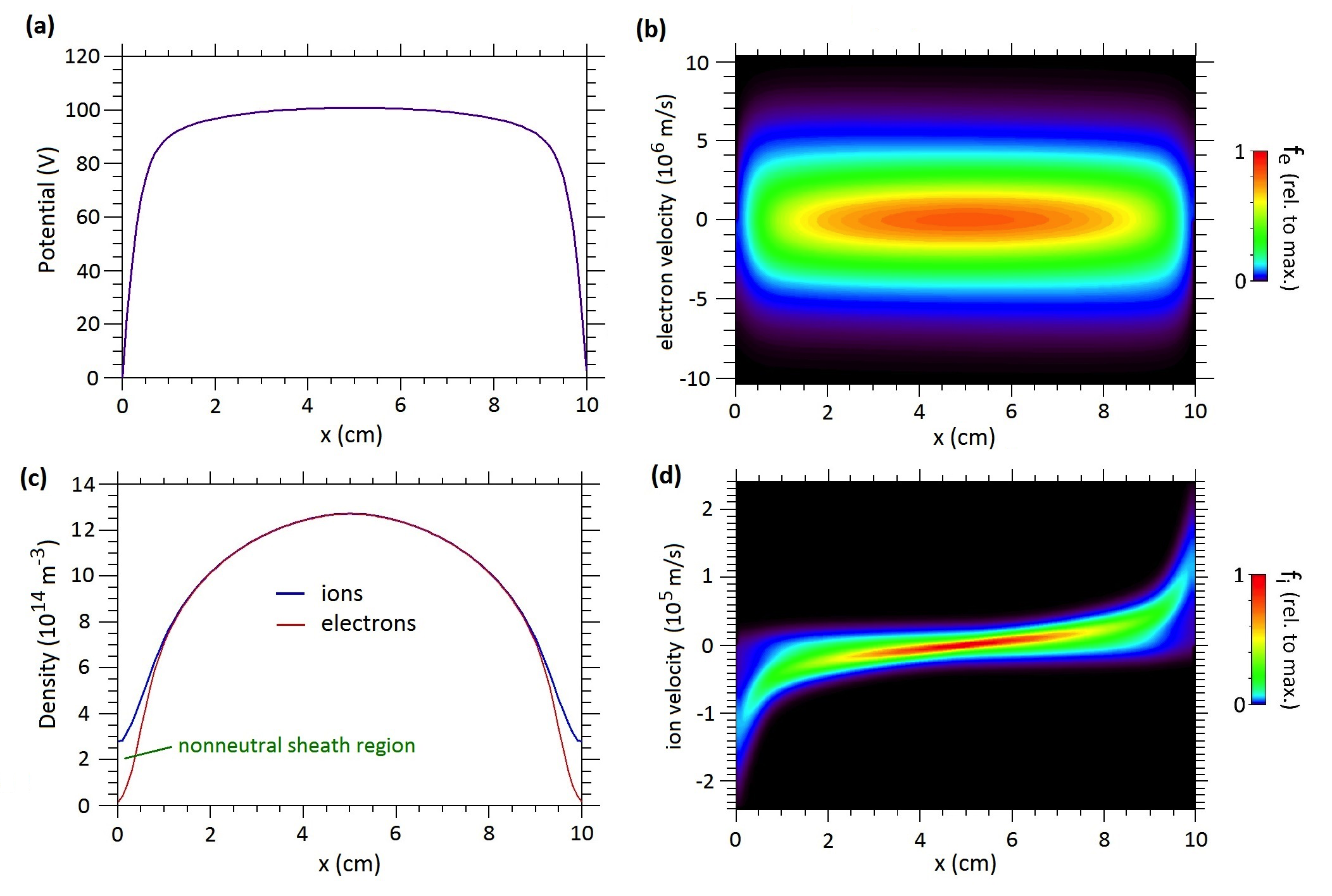 Although the BOUT++ simulation worked well in physics terms, it was unexpectedly slow. Moreover, the speed enhancement in parallelized runs did not scale well enough with the number of processors to win much over the serial code. In our ongoing work, we will further profile the BOUT++ code to improve the efficiency. Once optimized, simulations in curvilinear coordinate systems will be carried out to study the sheaths around emitting diagnostic probes, dust grains, and filaments. In the meantime, new theoretical results about curved-geometry emitting sheaths were demonstrated (Campanell and Umansky 2017). We showed that the ion-trapping effect can cause a spontaneous current oscillation, likely explaining filament-induced oscillations reported in experiments.

Magnetic-fusion energy research is relevant to the Lawrence Livermore National Laboratory’s energy and climate security missions. A major challenge for magnetic fusion is to mitigate the problems caused by the hot plasma bombarding the material walls (Naujoks 2013). Our project furthered the theoretical understanding of plasma–surface interaction and developed simulation programs of the sheaths that form at the interface. The project also broadened the scope of the Laboratory’s plasma physics research, since improved knowledge of sheaths has applications to many low-temperature plasma devices and to plasma–surface interactions in space (Robertson 2013). Collaborations are emerging with researchers at other institutions who are interested in conducting experimental studies of the inverse regime. Our research also has the potential to be extended to the DOE Office of Science under the Opportunities in Basic Plasma Science program.

Thermionically emitting cathodes are important throughout the field of plasma physics. For the last century, their interaction with plasmas has been modeled by the theory of SCL sheaths. Today, SCL-sheath assumptions are contained in models of tokamak divertor-plate heat flow, transpiration cooling of hypersonic vehicles, emissive probes, and thermionic spacecraft tethers. The results of our project prove that a hot-cathode sheath cannot be an SCL sheath. We showed that ion-trapping in the potential valley of an SCL sheath inevitably destroys it and forces a transition to an “inverse mode” (Campanell and Umansky 2017). In the inverse mode, all practical quantities (including the sheath potentials, the electric field in the plasma, dissipated power distribution, loss rate of plasma charges, and electrode erosion rates) substantially differ from what is predicted by SCL models. This result will motivate new research in applications from magnetic fusion to industrial low-temperature plasma devices. Our analysis shows that deliberate inducement of the inverse regime could mitigate plasma–wall interaction in fusion-energy machines by cooling the target plasma and reducing sputtering, but further investigation is needed to prove whether it is feasible. Continuum kinetic-simulation programs developed by the investigators prove the instability of the SCL mode and elucidate the properties of the inverse mode.