Decoding the X-Ray Cipher of the Universe in the Laboratory

Accurate, complete sets of atomic data are required to fully utilize the high-quality, high-resolution spectra of soft x-ray spectrometers, such as the one on Japan's Hitomi observatory. We completed laboratory measurements of cross sections of iron, cobalt, and manganese in astrophysically-relevant ionization states and used that data to interpret Hitomi x-ray spectrum data for the Perseus cluster.  The laboratory measurements were obtained using Lawrence Livermore National Laboratory's EBIT-I electron-beam ion trap and are more accurate than current theoretical models of those cross sections.  That accuracy was needed to properly interpret the Hitomi data. Our research also resulted in measurements of fluorescence cross sections for these ions, which, in addition to the electron impact cross sections measured at LLNL’s EBIT, will inform the analysis of x-ray data from current and future orbiting x-ray observatories.

One of the most rapidly advancing fields of astrophysics is x-ray astronomy. The last decade has seen profound growth in discoveries resulting from the successful operation of orbiting x-ray observatories, including the Chandra X-Ray Observatory, XMM-Newton (X-Ray Multi-Mirror Mission), and NuSTAR (Nuclear Spectroscopic Telescope Array). The Japanese Aerospace Exploration Agency’s ASTRO-H orbiting observatory, also known as Hitomi, will help decipher the x-ray emission from sources observed by NuSTAR and will extend high-resolution spectroscopy beyond the limits of Chandra and XMM-Newton. At the center of Hitomi’s instrument suite is the soft x-ray spectrometer, which will provide the first-ever high-resolution, high signal-to-noise spectra of some of the most exotic, most energetic sources in the universe, including black holes, neutron stars, active galactic nuclei, high-mass x-ray binaries, and supernova remnants. Decoding the high-resolution spectra requires accurate, complete sets of atomic data, most of which are generated using highly sophisticated atomic calculations. Unfortunately, most of the calculated data has not been tested experimentally in a systematic way. The lack of complete, systematic experimental benchmark measurements, in the case of multi-electron ions, limits and often precludes accurate interpretation of high-resolution spectra. We used LLNL’s EBIT-I electron-beam ion trap to make anchor measurements of the x-ray emission from multi-electron ions of iron-group elements (elements from chromium to nickel in the periodic table). These data can be used to decode the x-ray emissions from exotic extra-solar sources measured with instruments on orbiting x-ray observatories (see figure). 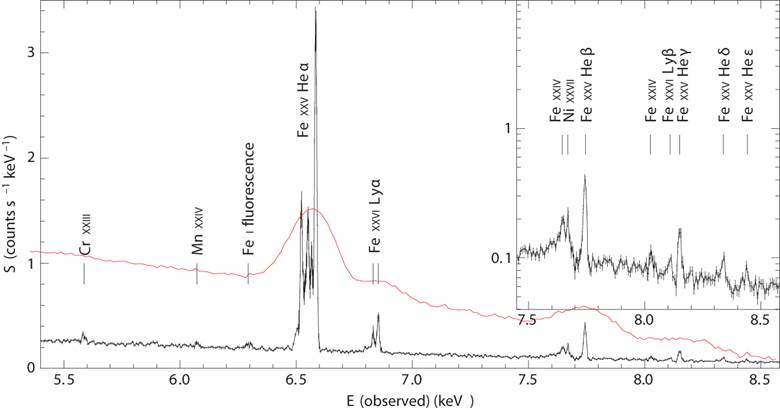 This figure shows the first high resolution spectrum of a cluster of galaxies ever taken. This x-ray spectrum was measured using the SXS quantum calorimeter instrument flown on the Hitomi X-ray Observatory, launched in February of 2016. Labels indicate x-ray emission from various charge states of iron, manganese, chromium, and nickel.  Accurate interpretation of the spectrum relied heavily on input from members supported by this LDRD. As a result, these transformative measurements have shown that the turbulent velocity of clusters is surprisingly small and is responsible for only a low level of turbulent pressure in the core of the galaxy cluster. This may indicate that turbulence in the cluster core is hard to generate or easy to damp. Accurate knowledge of the turbulent pressure, as well as all forms of the pressure, are necessary for determining the total mass of the cluster, which, in turn can have implications for cluster cosmology and dark matter (Hitomi Collab. 2016).

The production of anchor measurements that can be used by the x-ray astrophysics community also contributes to NNSA missions in space security. The benchmark data generated by this project will also be valuable in testing models being used to study the interiors of hohlraum target capsules and multi-electron high-atomic-number ions, enhancing the Laboratory’s core competency in nuclear weapons science in service to the NNSA's stockpile stewardship mission.

Our research was focused on providing high-accuracy benchmarks of x-ray transition energies and excitation cross sections, which can be used by the astrophysics community and the high energy density science community to support the Hitomi project, better understand magnetars, and develop a portable EBIT for use at synchrotrons. We met all these goals.

This project resulted in several significant outcomes. First, our measurements were made immediately available to the x-ray astrophysics community and were used to test spectral fitting packages and interpret spectra measured with Hitomi’s quantum calorimeter, the SXS. Second, our research will enable a better understanding of the x-ray spectrum of magnetars. Third, this project led to an important collaboration with NASA. Specifically, LLNL was named a co-investigating institution for NASA's X-ray Imaging and Spectroscopy Mission (XRISM) x-ray observatory to launch in 2022, and NASA funded LLNL to develop a custom EBIT for NASA/GSFC (delivered in October 2018) to perform guided laboratory astrophysics experiments in support of XRISM science for the next 7 years.