New Physics from Collisions at the Large Hadron Collider

The discovery of the Higgs boson—an elementary particle theorized to be the building block of the universe—at the Large Hadron Collider near Geneva, Switzerland, has raised more compelling questions than it has answered. These questions involve new physics, and without answers, the current particle physics theories suffer from major problems. One of these novel questions involves boson production by proton collisions. The viability of detecting colliding protons involved in boson production at the Large Hadron Collider to observe this new physics will depend heavily on the ability to reject the background from event pileup—that is, the case where multiple events occur within the same beam-bunch crossing. The Compact Muon Solenoid experiment at the collider will receive an innovative proton-tagging detector upgrade that will enable an entirely new means of rejecting background in collisions. We plan to apply our expertise in picosecond timing technology to commission and calibrate the timing system of the new detectors and then apply the high-precision timing information to a new type of analysis of W boson pairs (subatomic particles with a positive and negative charge that are each other's antiparticle). This unique production channel of W boson pairs is intimately connected with the Higgs mechanism and is important to a broad range of new physics models.

We expect to gain significant understanding of extremely fast timing in a new and innovative particle physics detector under the challenging beam conditions of an energy-frontier collider. We will lead the physics analysis that takes advantage of a new detector system at the Large Hadron Collider to extract evidence for the existence of new particles beyond the Standard Model of particle physics. This will be the first time such an experimental approach can reach the necessary sensitivity to detect new particles relevant to solving the problems of current particle theory. We will conduct the gross and fine calibration of the timing system using real data events, which constitutes full-fledged analysis of the Compact Muon Solenoid detectors.

Our search for new particles beyond the standard model is well aligned with the Laboratory core competency in nuclear, chemical, and isotopic science and technology relevant to nuclear theory and application of nuclear physics and radiochemical models to the study of fission and nuclear reactions.

In FY16 we (1) led a new analysis of previously unpublished data collected in 2012 for central exclusive production of W boson pairs, extending the reach for new physics searches (see figure); (2) developed a new technique to determine the selection efficiency, which is essential for suppressing the increased backgrounds observed at higher energy; (3) began the development of a precision timing system for a detector upgrade that will allow our analysis to continue when the Large Hadron Collector achieves its full design energy and luminosity; (4) modified the timing system concept to use only a single-phase comparison, which reduces the hardware needed by a factor of two; and (5) developed and tested the scheme for converting the radio-frequency signal to a digital format required by the time-measurement system used in the upgrade. 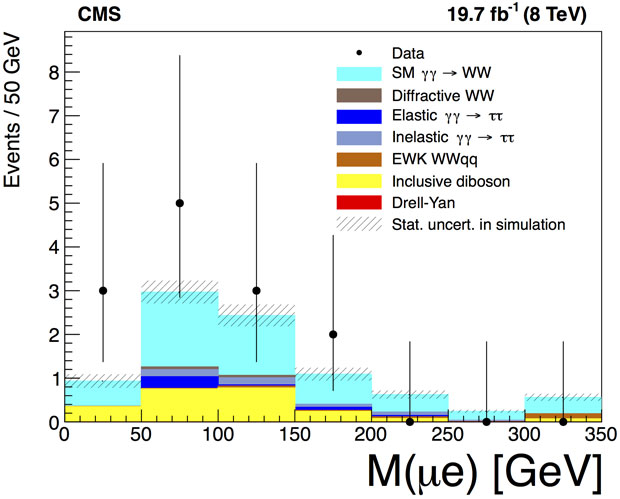 Invariant mass distribution (M) of detected leptons (ττ) from candidate gamma–gamma (γγ) to W boson pair events from our recent analysis of data from the Compact Muon Solenoid (CMS) at the Large Hadron Collider near Geneva, Switzerland. Our data is the first to show evidence for the standard model production of W bosons in this rare process (theory prediction is given as light blue in the plot).