Solid electrolytes with high ionic conductivity are crucial for developing batteries, fuel cells, and membranes with dramatically improved mechanical, thermal, and electrochemical stability. However, unlike electronic conductivity, which can be predicted from electronic structure, the physiochemical factors that regulate ionic conductivity are poorly understood. This has inhibited rational design strategies that are routinely adopted within the electrode and catalyst communities. Our objective is to use an integrated theory and experimental approach to extract the structure and property relationships that govern ionic conductivity. This will inform descriptors for use in rapid screening of new solid electrolyte materials, thereby dramatically improving the stability of energy storage and conversion devices. We plan to pursue three objectives: (1) develop a horizontal approach that uses computational "experiments" to test diffusion in known electrolytes under various conditions, (2) perform an in-depth vertical analysis of diffusive materials with high sensitivity to system perturbations, and (3) integrate ab initio and mesoscale techniques to predict conductivity under device operation.

We expect to establish an integrated approach for understanding and predicting high ionic conductivity in materials at multiple scales. Currently, very few solid electrolyte materials are known because the physiochemical drivers for ionic conductivity are poorly understood. Successful completion of this project will elucidate these mechanisms by isolating common features among known classes of solid electrolytes (e.g., garnets, metal oxides, solid acids, perovskites, and halides) and correlating them with ionic conductivity. The resulting descriptors could eventually be used in high-throughput screening and materials design efforts. We will also deliver a modeling framework to couple kinetic descriptions at different scales, thereby improving conductivity predictions in real devices under nonequilibrium conditions that can be directly compared with electrochemical measurements.

Computational simulations probing ion diffusion and correlations between structural quantities and transport behavior advances LLNL core competency in high-performance computing, simulation, and data science specific to modeling and design of alternative energy production and storage. Because of its potential for improving the safety, reliability, and performance of many energy storage and conversion devices, this research benefits the Laboratory's strategic focus area in energy and climate security. At the same time, increasing or limiting mass transport in solids is also an essential enabling technology for other applications of interest to DOE and the nation, including the development of high-sensitivity sensors and radiation detectors for nonproliferation monitoring.

In FY15 we (1) developed a framework for rapid set up and deployment of computational experiments; (2) measured conductivity and x-ray absorption spectra of titanium dioxide at different stages of amorphization, the process by which a structured crystalline material converts into an amorphous one; (3) began to develop a formalism for describing amorphous diffusion based on subdividing the transport barrier into component contributions (strain, electronic, chemical, and vibrational); (4) discovered that lithium conductivity in the solid electrolyte candidate Li3InBr6 is connected to intrinsic frustration in local chemical bonding patterns, which may be leveraged to further optimize performance; and (5) developed the theoretical methodology for surface hydrogen-molecule reactivity and dissociation in proton and hydride conductors. 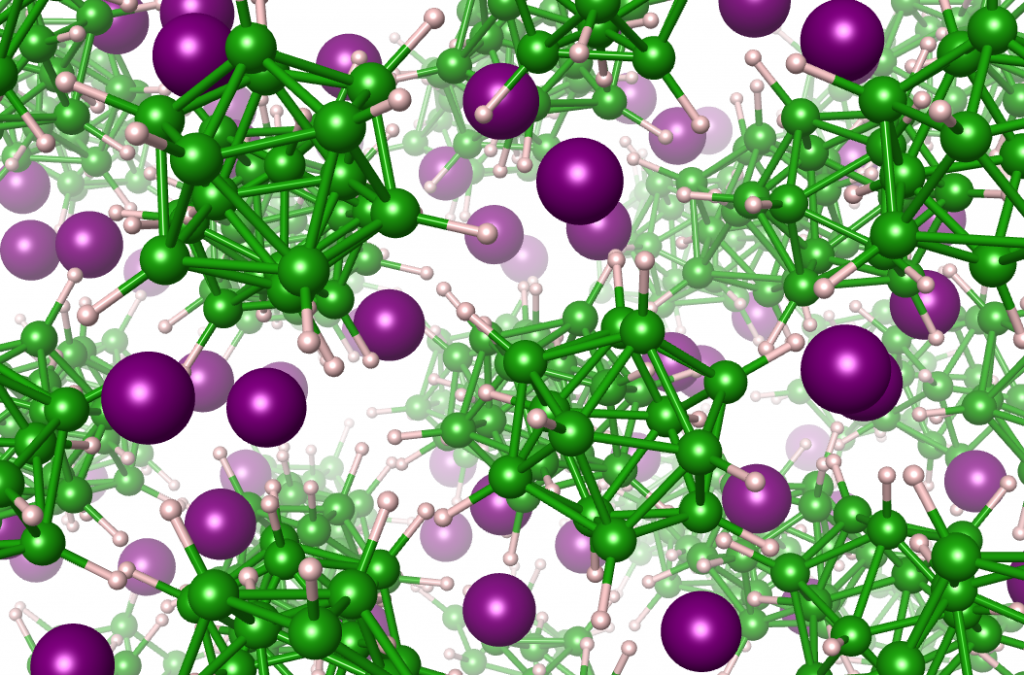 Structural dynamics of a lithium closoborane solid electrolyte, showing the disorder of lithium atoms (purple) as they diffuse through the solid material.