In addition to the numerous awards LDRD researchers garner each year, innovative science, technology, and engineering is evidenced by both the number of scientific journal articles and front-cover features in high-visibility journals documenting LDRD Program project results. In FY16, several LDRD projects were featured on the covers of peer-reviewed journals. 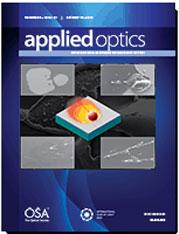 The October 10, 2015 issue of Applied Optics features a cover article titled “Impact of Laser–Contaminant Interaction on the Performance of the Protective Capping Layer of 1-ω High-Reflection Mirror Coatings,” which describes how differences in the thermal expansion properties of material coatings help explain why some types of coated mirrors in laser systems resist damage better than others. High-dielectric-constant multilayer coatings are commonly used on high-reflectivity mirrors for high-peak-power laser systems because of their resistance to laser-induced damage. However, surface contaminants, such as small particles, often lead to damage upon laser exposure, limiting a mirror’s lifetime and performance. Adding a thin protective “capping” layer on top of the multilayer coatings improves damage resistance. Understanding the mechanism of damage to the capping layer by laser–particle interaction could help improve laser design and capping material selection.

The cover article for the January 14, 2016 edition of Nanoscale was written by a team of researchers from Livermore and the University of California, Davis. “Engineering On-Chip Nanoporous Gold Material Libraries Via Precision Photothermal Treatment” details a method of developing a library of nanostructured material on a single chip using laser micro-processing. The team used finite-element multiphysics simulations to predict the effects of the laser and thermal conductivity of the supporting substrate during photothermal annealing. Using the guidance provided by simulations, the team was able to successfully fabricate an on-chip material library of 81 samples for use in the parallel study of structure–property relationships. This work is closely aligned with the Laboratory’s missions in energy security, high-energy-density physics, and the accelerated synthesis of tailored materials for advanced materials and manufacturing.

A vast number of shared digital media objects have been uploaded to services like Flickr and Instagram, which, along with their metadata and social ecosystem, form a vibrant environment for finding solutions to many research questions at scale. Collectively, these media objects provide information on trends, evidence of phenomena or events, social context, and societal dynamics. However, scientific endeavors in fields like social computing and computer vision have generally relied on independently collected multimedia datasets, which complicates research and synergy because of limited scale and copyright issues. In the cover article for the February 2016 edition of Communications of the ACM, researchers present a new multimedia dataset that enables research in extreme-scale machine learning. The article “YFCC100M: The New Data in Multimedia Research” describes the development and scientific use of the Yahoo Flickr Creative Commons 100 Million Dataset (YFCC100M), which is the largest public multimedia collection ever released, with a total of 100 million media objects, of which approximately 99.2 million are photos and 0.8 million are videos, all uploaded to Flickr between 2004 and 2014 and published under a Creative Commons commercial or noncommercial license. The YFCC100M dataset enables research in large-scale unsupervised and semi-supervised machine learning, and learning with noisy data. Moreover, the dataset offers opportunities to advance research in areas such as artificial intelligence, computer vision, and spatiotemporal computing.

Additive manufacturing, or 3D printing, has demonstrated great promise as a means for tailoring material behavior, including reactive materials, which produce controlled releases of energy. The article “3D Printing: Controlling Material Reactivity Using Architecture,” which appears on the cover of the March 9, 2016 issue of Advanced Materials, describes how the team used 3D printing to create conductive electrodes, and then conformally coated aluminum/copper oxide thermite films onto the surface using electrophoretic deposition. Their work produced “channel” and “hurdle” architectures, which offered different orientations of the multiphase expansion event relative to the flame propagation direction. Observations revealed that the spacing and orientation of the architectures played an important role in manipulating the resultant energy transport, offering a pathway for tailoring reactivity without using the conventional route of changing the mixing scale or formulation. The researchers hypothesize that this control over reactivity via architected design will lead to new types of materials for initiation systems, propellants, and pyrotechnics.

In the article “Solvent-Directed Sol-Gel Assembly of 3-Dimensional Graphene-Tented Metal Oxides and Strong Synergistic Disparities in Lithium Storage,” which appears on the cover of the March 21, 2016, edition of the Journal of Materials Chemistry A, a team of Livermore researchers present their finding that certain metal oxides increase capacity and improve cycling performance in lithium-ion batteries. The team synthesized and compared the electrochemical performance of three graphene metal oxide nanometer-scale composites and found that two of them improved reversible lithium storage capacity. The team dipped prefabricated graphene aerogel electrodes in metal-ion solutions, anchoring nearly all of the metal oxide nanoparticles on the surface of graphene, fully accessible to the electrolyte. This approach helps to optimize system-level performance by ensuring that most metal oxides are active.

Project: Unraveling the Physics of Nanometer-Scale Fluidic Phenomena at the Single-Molecule Level (13-ERD-030)

A team of Livermore researchers has developed protective yet breathable membrane materials featuring small-diameter (less than 5 nanometers) carbon nanotubes as moisture-conductive pores. The membranes provide water vapor transport at a rate 20 times faster than those predicted by conventional gas diffusion theories, surpassing commercial breathable fabrics such as Gore-Tex. Their findings are described in the paper “Ultra-breathable and Protective Membranes with sub-5 nm Carbon Nanotube Pores,” featured on the back cover of the July printed issue of the journal Advanced Materials. The team reported that these new carbon nanotube membranes can efficiently block biological threats such as dengue virus via size exclusion. Future work will aim to encode the membrane with a smart and dynamic response to chemical hazards, which could lead to a new paradigm of adaptive, breathable, and protective materials.

Project: Understanding the Creation and Reduction of Surface Microscale Roughness During Processing of Glass Optics (14-ERD-042)

The cover of the May 2016 issue of the Journal of the American Ceramic Society featured an article by Livermore researchers titled “Nanoscratching of Optical Glass Surfaces Near the Elastic–Plastic Load Boundary to Mimic the Mechanics of Polishing Particles.” In an effort to understand the complex nature of glass polishing, the researchers used an atomic force microscope (AFM) to mimic the mechanical removal of material by a single polishing particle on a surface being polished. The team used a 150-nanometer radius diamond-coated AFM tip to make nanoscratches in both air and aqueous environments on polished fused silica, borosilicate, and phosphate glass surfaces. The topologies of the nanoscratches were then characterized with the AFM. Using a combination of techniques, the team was able to define a composite removal function (removal depth) for a single polishing particle as a function of load. This removal function will serve as important input for understanding and predicting material removal rate and roughness during glass polishing. This work supports the Laboratory’s missions in stockpile stewardship and laser science.