To determine the feasibility of using optical fibers to deliver ultra-violet (UV) light for water disinfection, novel optical fibers were fabricated and characterized for total attenuation and scattering. Dopants (i.e., Zonyl, barium sulfate, and glass microbeads) were added to the fibers' cladding to enhance scattering without increasing attenuation. A characterization method was developed to measure total attenuation and scattering performance over the UV-infrared (IR) spectrum. It was determined that both the type and quantity of dopant affected the scattering of UV light, and that for the core and cladding materials used, glass microspheres were most effective for enhancing radial UV emission. Design of a fiber that can efficiently deliver UV light for water-disinfection applications was not achieved. However, this feasibility study demonstrated the ability to modify the radial emission of UV light from optical fibers and suggests alternate ways to achieve this goal in future research.

Ultraviolet light can be used to disinfect water for potable-water treatment or wastewater disposal and recycling (Hijnen et al. 2006). On a lifecycle basis, UV treatment has some advantages over alternative disinfection methods such as ozonation and chlorination/dechlorination (Lee et al. 2015). The current state-of-the-art method uses mercury lamps for UV light production, arranged in channels throughout a dedicated UV disinfection reactor (EPA, 2003).

Design of a fiber that can efficiently deliver UV light for water-disinfection applications was not achieved. However, this feasibility study demonstrated the fabrication of fibers with varying UV delivery properties at Lawrence Livermore National Laboratory's custom-fiber draw tower; it also demonstrated a method to quantify the performance of optical fibers in this heretofore seldom-explored regime. The research also resulted in numerous fiber design concepts for further investigation, some of which could be fabricated at the Laboratory.

As light travels along the length of an optical fiber, it is attenuated (longitudinally) by scattering and absorbance. Light that is scattered leaks out of the side of the fiber, while light that is absorbed represents photon energy that is converted to unusable thermal energy (i.e., heat). Both the scattering and absorbance performance of a fiber depend on the wavelength of light that is being transmitted. Ultimately, this study is intended to inform the design of an optical fiber with low absorbance and moderate, controllable scattering in the disinfection-relevant UV spectrum around 254 nanometers (nm), which is an optimal wavelength for microbial disinfection where DNA molecules exhibit maximum absorbance.

Figure 1. Optical Setup. Detector Position A is used to measure the light scattered out of the optical fiber and detector Position B is used for total-attenuation measurements.

Total attenuation was calculated by measuring the intensity of light reaching the detector at Position B for fibers of varying lengths, but which were otherwise identical. These measurements were fit to an exponential-decay curve and interpreted as attenuation in decibels per meter (db/m).

Seven different optical fibers were measured for attenuation and scattering. One of the fibers was uncoated silica while the other six had polymer coatings with various types and quantities of dopants intended to modify their scattering properties. The fibers were fabricated at the Laboratory’s 8.2-meter-tall custom optical fiber draw tower. A 250-1,000 μm fused-silica-glass core was clad with 40-75 μm-thick DeSoline DF-0016 polymer coating. Because the dopants are dispersed throughout the coating and impinge on the side of the core, the dopants can affect both total attenuation and scattering.

Figure 2 depicts the total attenuation measured for the undoped polymer fiber (“Base fiber”) as well as the three fibers whose coatings were doped with 1-percent scattering additive. Total attenuation of all the fibers at the most relevant wavelength (254 nm) was high.

The results shown in Figure 2 indicate that, for the wavelengths of interest, light does not propagate very far along the length of an optical fiber. If a fiber can be engineered such that most of its attenuation is due to scattering, these fibers could enable the design of certain water-disinfection technologies with fibers a few meters long. 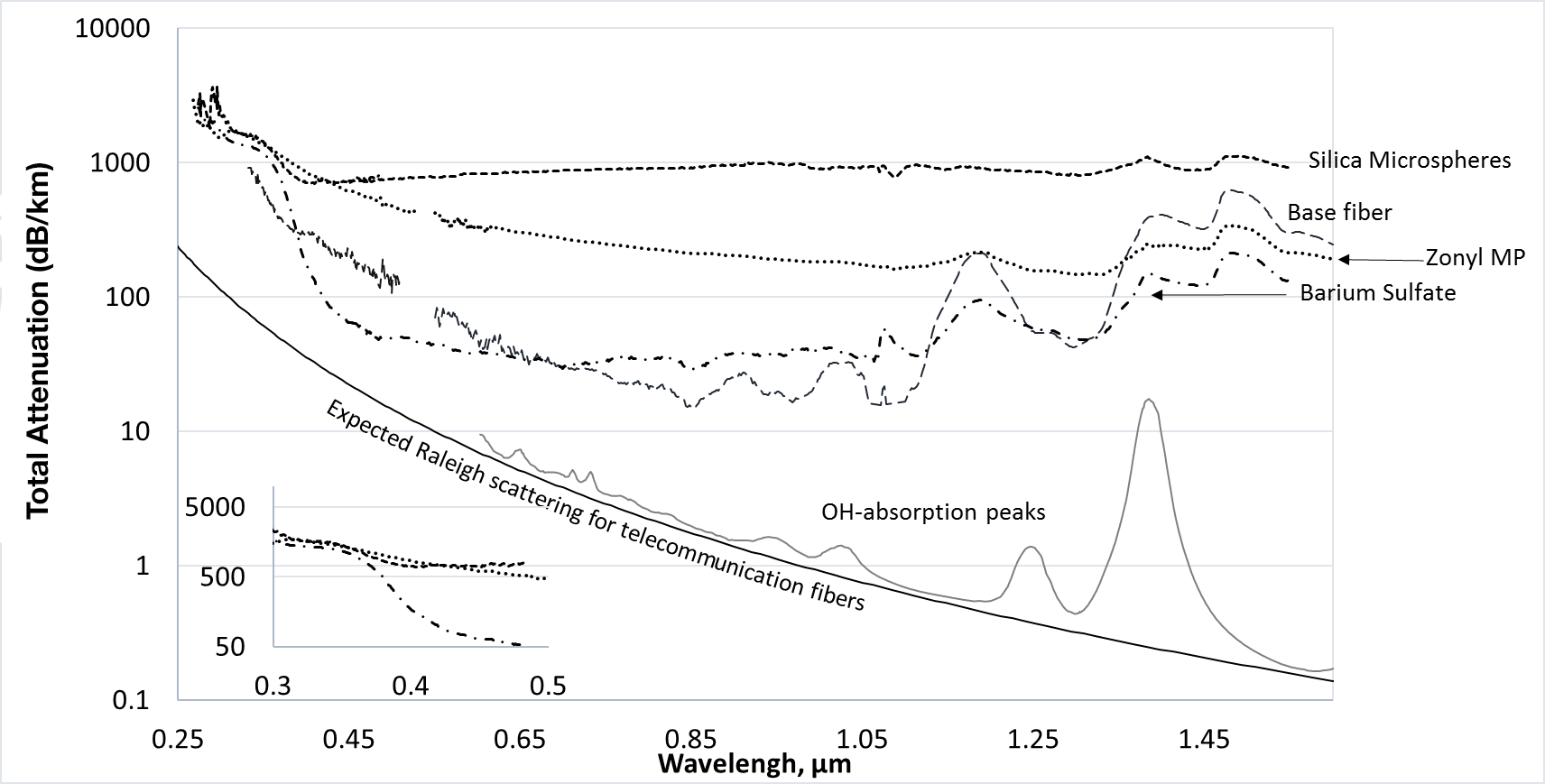 Figure 2. Total attenuation of light, as a function of wavelength, for silica-core optical fibers with polymer coatings doped with scattering additives. The figure includes a theoretical estimate of attenuation due to one form of scattering (Raleigh). The inset is an enlarged view of the performance of the doped fibers in visible and near-UV light.

The scattering performance of all the coated fibers is shown in Figure 3. For all fibers, very little UV light (near 254 nm) is scattered. When combined with the results from Figure 2, Figure 3 indicates that all fibers tested absorb most of the UV light. UV light simply does not propagate down the core of a fused silica fiber.

These results do indicate, however, that it is feasible to control the scattering of light by doping the fiber coating. Specifically, the glass microbeads substantially enhanced scattering above 375 nm, and increasing the dopant loading that occur in water at 365 nm could be affected by the fibers used in this study. 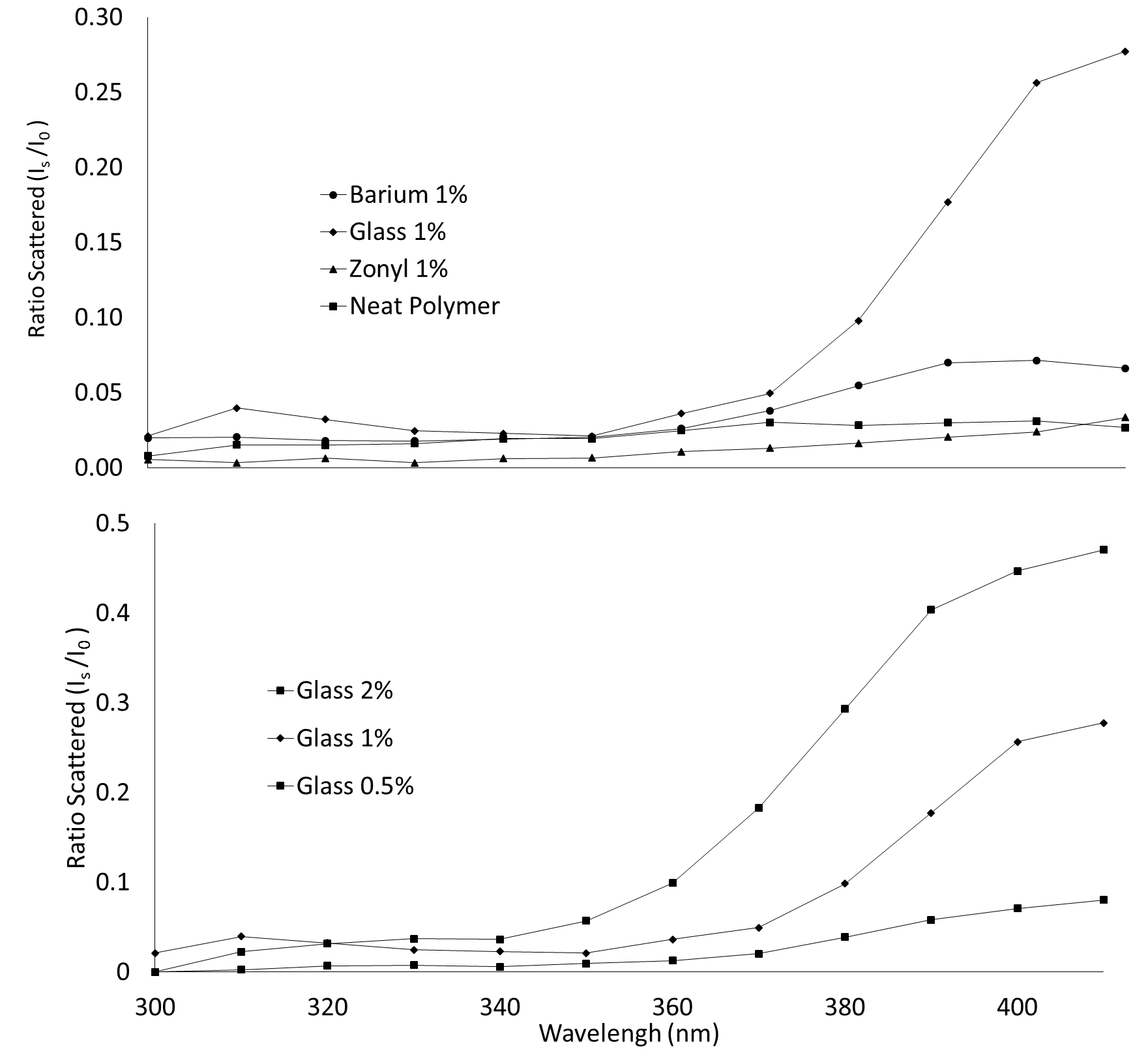 Figure 3. Scattering performance of custom optical fibers as a function of wavelength. The vertical axis depicts ratio of light scattered to the total light input over a 3-meter length of fiber. Higher values at lower wavelengths are desired for this application.

The impact of the surrounding media on the performance of the fiber was also investigated. Figure 4 depicts the total transmittance (i.e., light that was not attenuated) of the “base” undoped polymer-clad fiber when it was suspended in air and submerged in water. These results indicate that the interface between the cladding and its surroundings also affects the guiding properties of the fiber. While the scattering and total attenuation performance were not measured for all of the doped-cladding fibers, we can infer that their performance also will be affected. This effect is critical for the eventual design of UV-disinfecting optical fibers.

Figure 4. Comparison of the total transmittance of undoped polymer-clad silica-core optical fiber when suspended in both water and air. The fiber’s attenuation at short wavelengths is significantly higher when submerged.

This work provided critical information that can be used to select both the optimal nanoparticle size to attach to the optical fiber and the design criteria for the polymer coating, in order to maximize scattering of disinfecting short-wavelength (UV-C) UV light into water. This feasibility study represents the first step toward a new line of research in the design of optical fibers for short-wavelength applications. Such fibers could impact several of the Laboratory's and the DOE's missions, including national security, as well as energy and water security. The work has shown that designing optical fibers for high performance in the UV wavelengths is challenging. However, such fibers could enable the development of new tools for scientific experimentation, laser and optical technologies, sensors, communications technologies, and water-treatment methods. This work has also initiated a collaboration between Lawrence Livermore National Laboratory and Arizona State University.

The collaboration initiated by this project is expected to lead to follow-on funding for both UV-based water disinfection technologies and other water treatment projects. Further opportunities to explore higher-performing fibers in the UV spectrum may be available for non-water treatment applications.