Three-dimensional nanometer-scale crystal assemblies are a promising form of solid material that can have properties derived from both their individual building blocks as well as emergent cooperative phenomena. Reliable synthesis of these films using a scalable method, however, is a major challenge. Electrophoretic deposition is an industrially relevant, scalable technique that has potential for depositing nanometer- to micron-scale films of highly ordered nanocrystals over large surface areas. We investigated the feasibility of using electrophoretic deposition to create ordered films of nanocrystals known as nanocrystal super-lattices. Our goal was to show that order could be retained during ligand exchange. For these studies, we chose to exchange oleic acid with ethanedithiol because multiple literature reports found disordering of multilayered films during this process, making this a good case study. We successfully demonstrated that short- and medium-range order remain after exchanging oleic acid ligands for shorter ethanedithiol ligands despite a contraction of about 30%. In fact, the grain sizes of compact regions grew, which is a form of solvent annealing.

Three-dimensional nanometer-scale crystal assemblies represent a new form of solid material that can have properties derived from both their individual building blocks as well as emergent cooperative interactions.1–5 One of the stumbling blocks for developing these novel materials is the ability to control the crystalline quality of the assemblies using a fast and scalable process. In this project, we set out to determine the feasibility of making precise hierarchical super-lattices (or mesoscale crystals) composed of nanocrystal building blocks. Our objective was to demonstrate the feasibility of new methods to synthesize and model coupled nanoparticle solids with the goal of enhancing spin–spin coupling and cooperative phenomena. It was predicted that coupled quantum dots could be used to generate novel materials with hitherto unrealized magnetic order, metal and insulator transitions, or electronic topological phase transitions with relevance to quantum computational devices. For this study, we focused on making and modeling spin-exchange magnets.

Figure 1. An electrophoretic-deposited nickel nanometer-scale crystal film at three scales of interest: (a) the nanocrystal–nanocrystal spacing and geometry, which dominates spin coupling and transport; (b) the grain size, which influences transport and scattering; and (c) macroscopic form, which influences device integration. The individual nanocrystals are 15 nm with spacing set by oleic acid ligands.

Our principle objective was to show that super-lattice order could be retained during ligand exchange. Our approach was to synthesize films using electrophoretic deposition to perform in situ ligand exchange and to characterize order and nanocrystal–nanocrystal spacing for films with and without ligand exchange. We demonstrated that electrophoretic deposition could be used to deposit ordered nanocrystal super-lattices, and that order could be retained despite significant lattice contraction while exchanging ligands, thus meeting the primary study objective.

Our test particles were nickel nanocrystals made at the Molecular Foundry at Lawrence Berkeley National Laboratory in Berkeley, California. Nanocrystals were covered with oleic acid ligands and dispersed in hexane with concentrations of 1 to 50 mg/ml and remained stable for more than a year. Dilute solutions had a zeta potential of approximately 60 mV as measured by laser doppler micro-electrophoresis. The diameter of 70 nanocrystals was measured by transmission electron microscopy and found to be 14.4 ± 0.80 nm, a variation of approximately 5%. The individual nanocrystals are polycrystalline, partially faceted, and have an average aspect ratio of 1.1.

We found that polycrystalline super-lattices formed with domain sizes of about 300 nm when deposited from 10-mg/ml nickel nanocrystal solutions onto silicon substrates for 5 minutes with a field of 8 V/cm (Figure 2). Films deposited under these conditions showed Bragg spots when measured by grazing incidence x-ray scattering, indicating ordering in both the lateral and vertical directions. 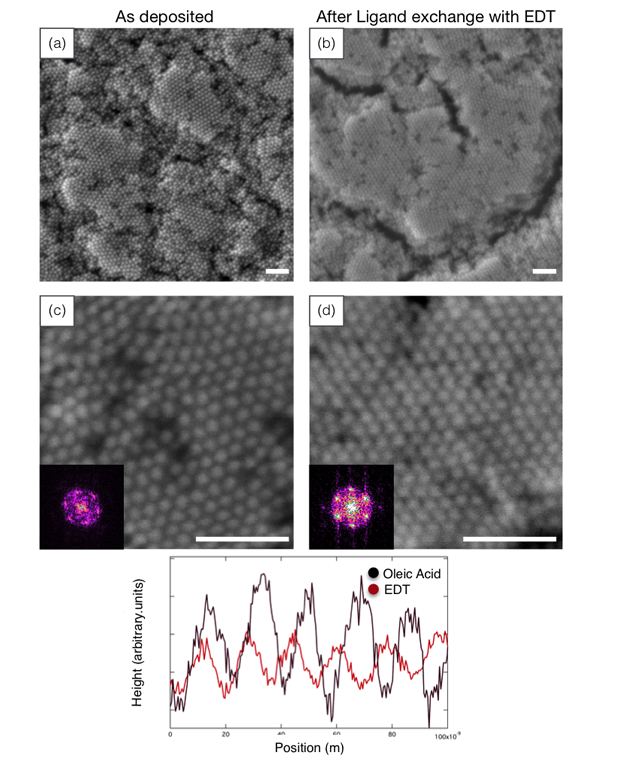 Virtually all nanocrystal materials dispersed in solutions have a shell of ligands at their surface. Our colloids used oleic acid to keep them stable in solution. These ligands dictate the nanocrystal–nanocrystal spacing and can form a barrier for electron and phonon transport as well as limiting the overlap of wave functions between nanocrystals. Removing or shortening ligands is an essential step for controlling transport, band structure, and spin coupling. However, shortening ligands while the nanocrystals are in solution often causes them to aggregate and precipitate. In addition, shortening ligands once a super-lattice has been formed causes large strains that induce cracking. Our approach was to deposit super-lattices and then to exchange ligands without removing the solvent or the electric field so that nanocrystals had sufficient mobility to recrystallize during ligand exchange.

The six peaks in the Fourier transform reflect the hexagonal symmetry of the in-plane packing. For the as-deposited sample with oleic acid ligands, the average of these peaks gave a center-to-center spacing of 16.0 ± 0.6 nm. Grazing incidence x-ray scattering measurements of a film deposited under the same conditions gave a spacing of 15.7 nm, which is in good agreement.

The images and the line scans show qualitatively that the nanocrystal structure has become more compact after exchanging oleic acid with ethanedithiol. To obtain a more quantitative measure of the center-to-center distance, we use the fast Fourier transform (see Figure 2 inset), which averages over the entire image. The peaks in the fast Fourier transforms indicated that the spacing changed from 16.0 ±0.6 to 15.5 ±0.9 nm, or 0.5-nm reduction in spacing. Subtracting the average nanocrystal size, the spacing between the nanocrystals changed from 1.6 to 1.1 nm or about 31% contraction when oleic acid was exchanged for ethanedithiol.

Despite this enormous contraction, the crystal remains locally ordered over regions up to microns. In fact, the area of compact domains was increased from about 300 to about 600 nm during the exchange process. The domains are separated by cracks. We do not know yet whether these cracks form as the solvent is removed during drying or whether they occur during ligand exchange while still wet. We expect that the former can be ameliorated by a more controlled drying procedure and that the latter will require tuning of the electric field or temperature during ligand exchange. Previous studies have shown that multilayered spin-cast and drop-cast films become completely disordered and have increased cracking when oleic acid is exchanged for ethanedithiol using either solution processing or vapor treatment, to put our accomplishment in perspective.14,15

Building upon techniques developed with a recent accelerated materials and manufacturing initiative to enhance ordering, coupling, and functionality of nanometer-scale material composites, our research directly supported the Laboratory’s core competency in advanced materials and manufacturing. Not only does this research refine LLNL’s ability to print materials in three dimensions with nanoscale precision, but also opens the possibility of printing materials with improved transport properties and tunable band structures.

This feasibility study demonstrated proof of principle for a new method to exchange ligands without destroying order. Although successful in situ ligand exchange has been demonstrated in the literature, reports typically describe layer-by-layer methods.16–18 These methods would be difficult to scale up to multilayer films or to incorporate into a three-dimensional printing configuration. Although this study demonstrated tighter packing, it did not demonstrate improved coupling. That is, although the nanocrystals are demonstrably closer, it was beyond our scope to measure materials properties that indicate improved coupling such as greater electronic transport, changes in optical properties, or changes in band structure. We have submitted two proposals for further research to Lawrence Berkeley National Laboratory's Advanced Light Source and Berkeley's Molecular Foundry. A follow-on Laboratory project has the goal to develop a better understanding of mesocrystal assembly and material properties, which continues to build collaborations and extend LLNL capabilities.