We are using key LLNL spectroscopic and modeling capabilities to understand the physical processes of an operating regime relevant to the removal of waste material from a plasma for future magnetic fusion power reactors. This regime is characterized by reduced power and plasma flux, and is regarded as a promising solution for heat exhaust, in support of our role in international nuclear fusion efforts.

Plasma near the balance of ionization and recombination offers significant challenges for physical interpretation and computer simulations in conditions relevant to both astrophysical phenomena such as solar flares and planetary nebulae, and plasma-based fusion experiments. A magnetically confined plasma in a toroidal tokamak device relies on efficient cooling at its boundary before impinging on and damaging the plasma-facing armor. This cooling leads to a broad range of plasma conditions ranging from highly collisional and conductive on closed field lines in the core, to primarily convective in a relatively "cold" region on open field lines connecting to the wall, known as the "divertor" configuration. The divertor is a device in the tokamak that allows the removal of waste material from the plasma while the reactor is operating. This allows control over the buildup of fusion products in the fuel, and removes impurities in the plasma that have entered into it from the vessel lining. It is in the cold region where distributed radiation of power crossing from the core to the boundary of the fusion plasma is critical for steady-state operation of a fusion reactor. Modeling of the plasma in this region, however, has consistently been challenged to match key observations by plasma diagnostics in the divertor, including parameter gradients, the location of the edge of ionization and recombination balance, and, most notably, the absolute amount of radiated power. These have all been poorly predicted with available experimental data at large fusion research devices around the world. We are applying key Lawrence Livermore spectroscopic and modeling capabilities to ionizing and recombining plasmas to elucidate the roles of physical processes relevant to the detached-divertor regime for operation of future fusion power reactors, as well as to thermally unstable stellar plasmas. This detached-divertor regime is characterized by reduced power and plasma flux on divertor targets and is regarded as a promising solution for heat exhaust. Interpretive capability for this regime to date is limited in aspects critical for understanding divertor performance. We intend to examine the source of a universal shortfall in predicted radiation and the role of molecules in cold plasmas using unique extreme ultraviolet spectroscopy and advanced boundary modeling. Our experiments scanning the detached regime will result in integration of essential missing physics into codes for application to future fusion devices, and applied to understanding of partially ionized interstellar matter. The work will enhance a key Laboratory capability in plasma physics, throughout the transition from attached to fully detached divertor conditions, and provide the Laboratory with an increasing role for the design and operation of future tokamak divertors relevant to international fusion programs. In addition, the broader study of extreme ultraviolet radiation relevant to solar flares and nebulae will be of interest to the astrophysical community.

Understanding and controlling power flux across the boundary from the plasma core to the reactor wall is one of the primary scientific challenges for reactor-relevant plasmas for magnetic fusion energy tokamaks. We expect to address the “radiation shortfall” problem, where measured radiation is less than predicted because of suspected molecular effects. The source of the shortfall in thermally unstable plasmas will be studied using unique Livermore extreme ultraviolet spectroscopy and advanced boundary modeling. Experiments scanning the detached-divertor regime in the DIII-D National Fusion Facility tokamak device in San Diego, California, will validate the essential missing physics in our codes, improving understanding of detached-divertor operation and partially ionized interstellar matter. We intend to supplement the SPRED spectroscopy system (survey, poor resolution, extended domain) on DIII-D with a dedicated divertor SPRED diagnostic to measure radiated power from fuel and dominant impurities. This diagnostic system provides the greatest potential for developing controlling physics for the divertor system, and will complement and expand on the divertor diagnostics array already existing and planned on DIII-D. In addition to DIII-D experiments, we will couple theory with state-of-the-art modeling using the two-dimensional Livermore edge-plasma transport code UEDGE, and a similar code used internationally, SOLPS-ITER, which was developed for the evaluation and design of the ITER international nuclear fusion research divertor. We will enhance and apply the Laboratory's UEDGE boundary fluid code to detachment onset in plasmas incorporating data from extreme ultraviolet spectroscopy. The addition of SOLPS-ITER will complement UEDGE results, expand Lawrence Livermore's software competency, and help benchmark and validate this code. We aim to elucidate the physics of detachment in high-performance plasma scenarios and to provide validated predictive modeling capability for future devices. The new diagnostic and modeling capabilities we develop will permit extension of detachment physics to innovative configurations such as the Laboratory's Snowflake divertor. In addition, interpretation of experimental results will guide divertor design to maximize two-dimensional radiative losses. Extreme ultraviolet spectroscopy emissions under ionizing and recombining plasma conditions will be made available to the solar and astrophysical communities, and results will assist the operation of a steady-state fusion tokamak device.

Results from this work provide a unique opportunity to quantify the role of key physical atomic processes in ionizing and recombining plasmas using extreme ultraviolet spectroscopy, in support of the Laboratory's core competency in high-energy-density science. Our research also supports the DOE goal to strengthen key science, technology, and engineering capabilities and modernize the national security infrastructure relevant to nuclear security.

In FY17 we (1) conducted all necessary design reviews at General Atomics detailing the motivations and engineering requirements and implementation for installation and operation of our system on the DIII-D machine, (2) purchased and installed a new camera and vacuum equipment on SPRED, allowing the aged instrument (25-years old) to achieve excellent vacuum conditions; (3) performed experiments on DIII-D with the SPRED spectroscopy system; and (4) began modeling activities with both UEDGE and SOLPS-ITER, as planned. 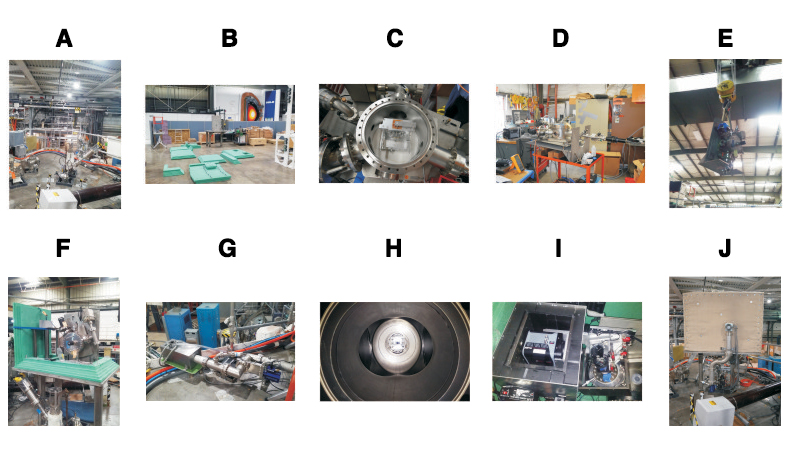