In the context of enhanced geothermal systems and CO 2 sequestration, which involve the injection of large quantities of fluid, our knowledge of subsurface fluid transportation and fracture networks is weak below 1 km. Traditional techniques to image and characterize the subsurface are either transparent to fluid properties (the seismic approach) or transparent to rock properties, with shallow penetration into the ground (the electromagnetic or "EM" approach). This project modeled seismoelectric effects—pore-scale phenomena in naturally charged porous media—to leverage the advantages of both seismic and EM capabilities and offer an improved view of the subsurface. This research led to the development of new capabilities, including a new code that supports seismic- and EM-wave propagation based on a spectral-element method. This allows modeling of a variety of geometries and applies to a range of problems in geosciences and engineering nondestructive analysis at Lawrence Livermore National Laboratory (LLNL).

LLNL is involved in various projects related to energy technologies, such as enhanced geothermal systems and CO 2 sequestration, that involve the injection of large quantities of fluids into the subsurface. To improve our knowledge of subsurface fluid transportation below a depth of 1 km, we attempted to map a fluid-saturated fracture network down to reservoir-relevant depth. Traditional seismic imaging techniques fail to resolve fluid-phase properties, while pure EM approaches provide no constraints on the rock structure and exhibit shallow penetration of the ground. We took advantage of both approaches and used seismoelectric effects, which occur in porous media and correspond to the conversion of seismic signals into electric signals (Ivanov 1939), as observed in the early 90s. The figure below illustrates this conversion. 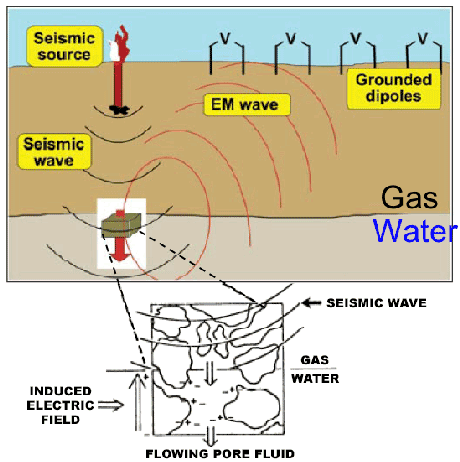 Field test of seismic to electric conversion (after Thompson and Gist 1993).

Fluid-saturated porous media are naturally charged, such that a propagating seismic wave generates an electrical current, which in turn induces an electrical field. This field is often referred to as a coseismic electric field, propagating with the seismic wave. When this coseismic field is disrupted by an interface (due to mechanical or electrical heterogeneities), an electric dipole is created, triggering an EM wave that is instantaneously detectable. Such coupled seismic and EM signals can be used to (1) recover electrical conductivity and permeability, as well as density and seismic wave speeds, and (2) identify subsurface layers and thin fractures. This coupled seismic–EM approach strongly differs from current joint decoupled seismic–EM inversions. The latter integrate multiple data triggered and recorded separately, physically decoupling seismic and EM problems—thereby risking the introduction of errors owing to strong nonlinear couplings and missing potentially crucial phenomena such as seismoelectric effects.

In this project, we took full advantage of the natural physical coupling between seismic and EM phenomena in porous media. The forward numerical approach of seismoelectric effects has been treated in a series of papers (e.g., Haartsen and Pride 1997, Revil and Jardani 2010), but the full inverse approach has received little attention. Jardani may have been the first to show the possibility of inverting for poroelastic parameters and electrical conductivity using a stochastic joint inversion of two-dimensional seismoelectric signals, solving only EM equations in the quasi-static limit (Jardani et al. 2010). Mahardaka was the first to explore the potential of seismoelectric effects for moment tensor inversion, though still in a quasi-static approximation (Mahardika et al. 2012). There remains a need to improve the understanding and modeling of seismoelectric effects and their potential to better characterize the subsurface.

Our objective was to introduce new methods to solve the forward and inverse problems to model seismoelectric effects in porous media, both to improve our understanding of seismoelectric effects and to demonstrate their potential for constraining the properties of solids and fluids in the subsurface (namely, hydraulic permeability, electrical conductivity, fluid viscosity, porosity, density, bulk moduli of the frame, solid and fluid phases, and the frame-shear modulus). We developed a pure EM module and identified the coupling terms to achieve the modeling of seismoelectric effects. Handling the diffusive nature of the EM field after conversion of the seismic signal is nontrivial, as it generates two radically different timescales. To remedy this, we derived a quasi-static EM equation coupled with poroelastic wave equations, while still working on stabilizing the complete dynamic coupling. An adjoint EM module was also implemented and will allow for subsurface imaging based on adjoint EM inversion. While deriving the algorithm for the coupled seismic–EM system, we identified a new capability that would offer a new method to characterize the moment tensors of fracking microevents, thereby indirectly mapping fluid-saturated fracture networks.

This project supports DOE's science and energy objective of delivering scientific discoveries and tools that transform our understanding of nature and strengthen the connection between scientific advances and technological innovation. It also supports the laboratory's earth and atmospheric science core competency and the energy and climate security research and development challenge, providing a new technique for monitoring fluid transport and fracture network detection that is relevant to geophysics, energy exploration and extraction, and CO 2 sequestration. This project introduces a code that supports both seismic and electromagnetic wave propagation and is based on a spectral-element method. It allows modeling of a variety of geometries and offers application to a range of problems. This code has been adapted for applications in geosciences and engineering nondestructive analysis at LLNL.

This project yielded a numerical tool for new and high-impact applications of purely seismic, purely electromagnetic, and coupled seismic–EM to practical subsurface imaging problems in exploration geophysics, environmental site characterization, CO 2 sequestration, and geothermal reservoir monitoring. This work is relevant both to the DOE’s mission of understanding and characterizing subsurface physical properties and to energy industries that seek to improve fracture network and fluid displacement monitoring.

Ivanov, A. G. 1939. "Effect of Electrization of Earth Layers by Elastic Waves Passing Through Them." Doklady Akademii Nauk SSSR 24, 42–45.