The prediction of magnetic-fusion-energy plasma performance requires accurate modeling of the edge plasma region, which in turn requires accurate coupled treatment of the neutral (atomic) species and charged species (ions and electrons) that inhabit this region. Lawrence Livermore has a highly efficient, implicitly coupled combination of fluid neutrals and plasma models within its two-dimensional, edge-transport code UEDGE. However, these plasma-species models must be coupled to a kinetic neutrals model to achieve sufficient physical fidelity for some important situations. Such neutrals models are based on Monte Carlo techniques, which rely on repeated random sampling to compute results. The coupled combination of plasma-species models with kinetic-neutrals models can be very computationally expensive to run. We are developing an efficient scheme for combining kinetic Monte Carlo and fluid plasma computations for magnetic fusion energy edge simulation. To this end, we will develop new, optimally performing coupling algorithms; implement these for combining established neutral and plasma codes; and verify, demonstrate efficacy of, and validate the algorithms using existing analyzed data from experiments conducted at ITER, an international magnetic-fusion-energy experiment in the south of France intended to prove the viability of magnetic fusion as an energy source.

Our primary goal is to overcome the limitations of current magnetic fusion energy edge-transport codes that prevent wide and routine use of coupled kinetic Monte Carlo neutrals and fluid plasma-transport models, as well as the use of such coupled models as a component of a larger, further-integrated tokamak fusion reactor model. Satisfying this goal would address a very important need for magnetic-fusion-energy progress towards its larger goal of achieving controlled thermonuclear fusion as an energy source. Specifically, we expect to deliver (1) highly efficient and usable, self-consistent Monte Carlo and fluid plasma coupling algorithms, suited for large-scale parallel computing; (2) systematic mathematical stability and convergence-rate analyses of numerical methods for a hierarchy of model problems that capture key aspects of the coupling problem; (3) implementation of the algorithms in coupling a Monte Carlo neutrals code with a fluid plasma code; (4) verification against codes coupled with existing algorithms; and (5) validation against data from relevant experiments. 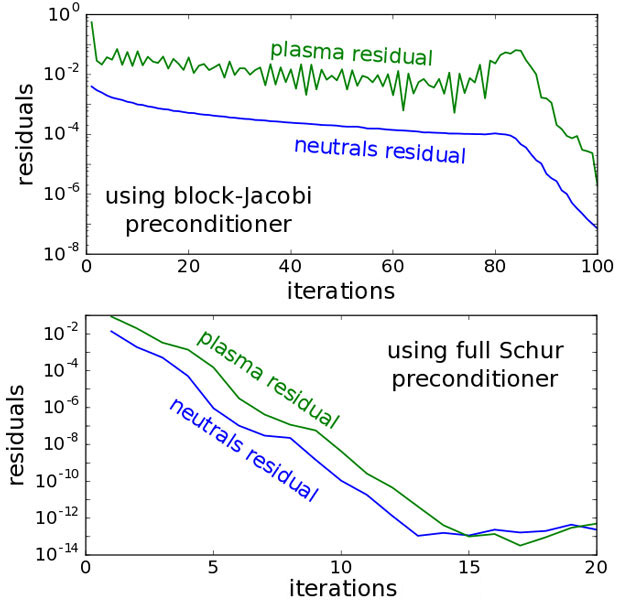 We have developed a novel method for extracting the correct full Schur-matrix preconditioner for a constrained representation of a coupled system from the more straightforward but higher-dimensional representation of the system. Shown is a demonstration that the use of this Schur preconditioner can greatly accelerate the nonlinear solution of a model coupled plasma-neutral system compared with a simpler, previously used, block-Jacobi preconditioner that does not make use of information about the couplings in the system.