A major hindrance to developing more accurate models for high-explosive detonation is the lack of experimental data for processes occurring at sub-micron length scales (over a hundred times smaller than a grain of sand) and on timescales ranging from nanoseconds to microseconds (a millionth to a billionth of a second). Our goal is to address these issues with measurements of time-dependent carbon condensation and void collapse during detonation. These phenomena are not amenable to measurement because of the optical opacity at the detonation front. We plan, therefore, to measure carbon condensation and void collapse using single-pulse, small-angle x-ray scattering. Experiments will begin with small amounts of about 100 mg of the carbon-rich high-explosive HNS (hexanitrostilbene), then we will use approximately 2 g of composition B (a mixture of TNT and RDX explosives), and finally transition to approximately 10 g of TATB (triaminotrinitrobenzene) and LLM-105-based (2,6-diamino-3,5-dinitropyrazine-1-oxide) materials. For HNS and composition B, we will use existing beam lines at the Advanced Photon Source at Argonne National Laboratory. For the TATB and LLM-105 experiments, we will use the Dynamic Compression Sector at the Advanced Photon Source, which is scheduled to begin operations in early FY15.

A key deliverable will be the ability to characterize the temporal evolution of void collapse and the kinetics of carbon nanometer-scale particle condensation during detonation of carbon-rich high explosives. We will derive nanoparticle-size distributions from x-ray scattering collected with 100-ps x-ray pulses over several microseconds. Initially, with HNS and composition B, we expect to observe graphitic and diamond nanoparticle growth, respectively. Subsequently, we will measure soot condensation and void collapse in LLM-105 and TATB, obtaining data that are crucial for validating predictive computational models of detonation.

Stockpile stewardship, counterterrorism efforts, and the design of advanced conventional munitions will directly benefit from our efforts to understand the fundamental processes of dynamic compression and collapse of voids for hot-spot formation and the carbon condensation and associated energy release behind explosive detonation fronts. Exploring the behavior of energetic materials during detonation also aligns with the Laboratory's core competency in advanced materials and manufacturing.

In FY15 we (1) measured HNS, Comp-B, and DNTF (dinitrofurazanfuroxan) explosives using small-angle x-ray scattering (see figure); (2) observed profiles consistent with graphitic soots for HNS, nanometer-scale diamond soots for composition B, and what we believe might be a carbon liquid-to-solid diamond transition in DNTF over the first few hundred nanoseconds after detonation; and (3) determined that these are the first small-angle x-ray scattering experiments on detonating explosives performed in the western hemisphere, and the first of these experiments with sufficient data quality to begin to determine the shape and size of resultant carbon condensates. 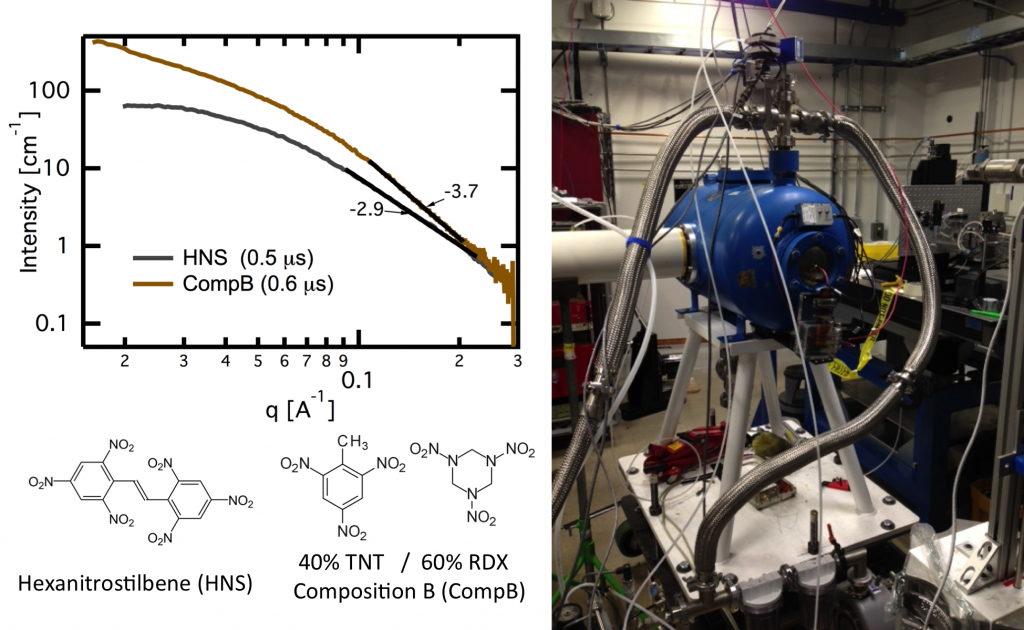 Detonation properties at nanometer-length scales and nanosecond-to-microsecond timescales can now be measured using ultrafast small-angle x-ray scattering. Particularly, the extra carbon that does not generate gasses condenses into carbon nanometer-scale particles. We have shown that these particles form very rapidly, within a few hundred nanoseconds after detonation, and different explosives that detonate with varying temperature and pressure produce very different particle shapes. The small-angle scattering from detonating HNS and Comp-B high explosives, with each trace taken about one-half of one millionth of a second after detonation, is shown left. The extra carbon in HNS forms what appear to be graphitic nanometer particles with complex morphology, while Comp B particles are much more three-dimensional, consistent with a fraction of this carbon forming diamond nanoparticles. Our detonation containment vessel is shown on the right.