According to current theory, about 15 billion years ago, matter and antimatter were created in equal amounts in the Big Bang. It is not known why all the matter and antimatter did not annihilate each other in the intervening years and leave behind a universe nearly devoid of matter such as stars and planets. In the Standard Model of particle physics, there is no mechanism that leads to a significant excess of matter over antimatter. Therefore, something substantial must be missing in the theory. The observation of a permanent electric dipole moment in an atom would signal the long-sought-after presence of a mechanism known as time-reversal violation, to explain matter–antimatter asymmetry. An electric dipole moment is a measure of the separation of positive and negative electrical charges in a system of electric charges. The most promising place to observe this mechanism in action is thought to be in nuclei with an octupole-deformed shape (a nucleus with eight poles), such as the short-lived (25-minute half-life) radioactive isotope radon-223. The observation of a permanent electric dipole moment in such an atom would have far-reaching consequences for both particle physics and cosmology. We plan to evaluate the feasibility of extracting the short-lived radon isotope radon-223, at sufficient quantities and purity for electric dipole moment measurements, from the aqueous beam dump at the Facility for Rare Isotope Beams when it comes online at Michigan State University in about seven years. Our feasibility study will produce design recommendations for a large-scale radon collection system. We will test a small-scale system, and determine the viability and hazards specific to extracting and purifying short-lived radioactive noble gases.

The Laboratory’s combined expertise in National Ignition Facility diagnostics, noble-gas mass spectrometry, gas–liquid interphases, and nuclear science capabilities creates a unique opportunity for us to study the feasibility of collecting radon at the Facility for Rare Isotope Beams. We expect to determine the feasibility of scaling a system to yield sufficient quantities of high-purity radon for electric dipole moment measurements. The achievable yield will be the product of the radon production and capture in the coolant at the Facility for Rare Isotope Beams, as well as the product of the gas extraction, purification, and transfer efficiency. We intend to supply the engineering parameters for scaling up a small system to the actual dimensions of the Facility for Rare Isotope Beams, as well as considerations for the design to increase feasibility and yield of collections of high-purity radon. We will also address safety issues necessary to successful radon collection, and draw on Livermore’s expertise in nuclear and chemical sciences to establish strong leadership roles at the facility. This work will help establish an important capability of the facility that will contribute to expanded nuclear science capabilities relevant to Livermore’s broader missions in stockpile stewardship and nuclear forensics.

The search for electric dipole moments is anticipated to be a major high-profile research effort at the Facility for Rare Isotope Beams. Our study is well-positioned to bring Livermore expertise and capabilities together to investigate how to safely and successfully collect the radon needed to realize this major science goal. Our study will strengthen the nuclear, chemical, and isotopic science and technology core competency, and support the Laboratory’s missions in stockpile stewardship and related areas by delivering relevant new technological capabilities. 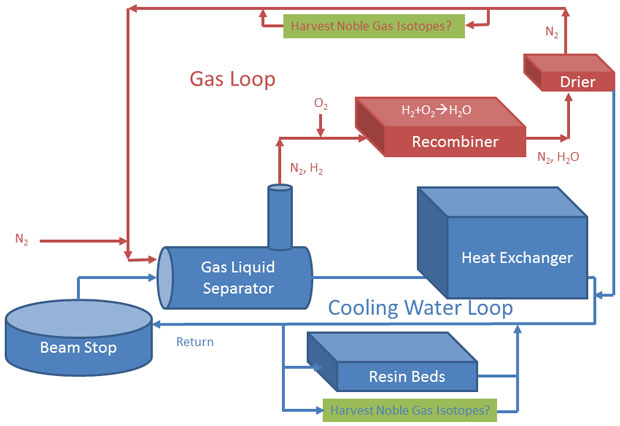 The design for the gas extraction system. Noble gas isotopes can be harvested at Michigan State University's Facility for Rare Isotope Beams from the cooling water loop or the off-gas loop.