Wetlands as a Source of Atmospheric Methane: A Multiscale and Multidisciplinary Approach

Boreal peatlands contain large amounts of old carbon, protected by anaerobic and cold conditions. Climate change could result in favorable conditions for the microbial decomposition and release of this old peat carbon as carbon dioxide or methane back into the atmosphere. Our goal was to test the potential for this positive biological feedback to climate change at the DOE Office of Biological and Environmental Research's Spruce and Peatland Responses Under Climatic and Environmental Change (SPRUCE) project site, a manipulation experiment funded by DOE and located in a forested bog in Minnesota. Taking advantage of LLNL’s capabilities and expertise in chemical and isotopic signatures, we found that carbon emissions from peat were dominated by recently fixed photosynthates, even after short-term experimental warming. We also found that subsurface hydrologic transport was surprisingly rapid at SPRUCE, supplying microbes with young dissolved organic carbon. We also identified which microbes oxidize methane to carbon dioxide at SPRUCE and found that the most active of these also fix nitrogen gas (which means they can utilize atmospheric nitrogen, making it accessible for other microbes and plants). These results reflect important interactions between hydrology, carbon cycling, and nitrogen cycling in the bog, and are relevant to interpreting experimental results and modeling the wetland response to experimental treatments.

Understanding the interacting processes that govern net emissions of methane (a powerful greenhouse gas) from wetlands is critical for predicting biospheric feedbacks to climate change. Peatlands cover only about 3% of the Earth’s surface, but contain roughly one-third of carbon stored by the terrestrial biosphere, or 500 to 600 Pg of carbon.1–3 Almost 90% of this carbon is found in northern peatlands, where cold temperatures and anoxic conditions have favored the accumulation of organic matter over the Holocene epoch. These latitudes are already experiencing climate change and future change may be amplified here.4 Considering the large amount of carbon stored in peatlands, their response to change may contribute substantially to terrestrial feedbacks to climate.5 Warmer temperatures and changes in hydrology could favor the decomposition of these large, old carbon stocks and the subsequent release of this carbon to the atmosphere as carbon dioxide and/or methane, which is a much more powerful greenhouse gas than carbon dioxide. Natural wetlands currently account for approximately one-third of global methane emissions.6 Predictions of future wetland emissions are hindered by a paucity of ecosystem measurements of carbon fluxes, environmental drivers, and links to subsurface processes that influence production and transport of these gases.

In this project, we aimed to test whether peatland response to a warmer climate will include enhanced decomposition and release of old peat at SPRUCE, a boreal peatland that is the site of a DOE-funded ecosystem manipulation experiment (https://mnspruce.ornl.gov/). Our specific objectives within the SPRUCE project were to (1) link belowground carbon-sources and processes to atmospheric fluxes of carbon dioxide and methane through natural abundance observations of carbon-14 and stable isotopes, (2) identify microbial species performing key biogeochemical functions using stable isotope probing with nanoscale imaging, (3) constrain subsurface transport pathways with noble gas profiles and hydrologic tracers, and (4) synthesize our findings with a biogeochemical box model to describe wetland response to warming—numerous external groups are working on carbon-cycle models for the SPRUCE site, but not with carbon-14.

Our research led to the following results and observations: (1) carbon-14 provided the most valuable insights; (2) successful experiments were performed for methane oxidizers (methanotrophs) and nitrogen-gas fixers (diazotrophs)—however, our anaerobic experiments targeting methanogens were not successful; (3) the study site has low potential for bubbling and high amounts of dissolved gases, so we shifted focus to water dating, recharge, and improved understanding of subsurface hydrologic transport at the study site; (4) we shifted focus to modeling carbon-14 in the peat and in emitted carbon dioxide with an already existing peat model (the Holocene Peat Model).7 This direction was pursued late in our project timeline, but simulations suggest a delayed response of emitted carbon-14 and carbon dioxide to warming treatments is possible.

Success under this project required teamwork and coordination with multiple external collaborators at SPRUCE for the overall benefit of the experiment. Initial plans included both warming and elevated carbon dioxide treatments, but the implementation of treatments was delayed and required shifting focus to warming only. At SPRUCE, 10 plots are receiving 1 of 5 levels of warming treatments 0 to 9°C above ambient temperature. Belowground heaters, which heat deep peat only, were turned on in June 2014. Aboveground heaters, which heat surface peat and aboveground air, were turned on in August 2015. The experiment is planned to continue for ten years.

We sampled surface emitted gases at multiple time points during the growing seasons of 2014 to 2016. Large surface chambers (1.13 m2) were capped to allow gases to accumulate over 2 hours for carbon dioxide and approximately 20 hours for methane to allow for sufficient accumulation of gases for carbon-14 analysis. Air samples were collected into evacuated serum bottles for concentration and stable isotope analyses and into evacuated stainless steel canisters for carbon-14. Carbon dioxide and methane were extracted and purified, and carbon-14 measurements were made at LLNL’s Center for Accelerator Mass Spectrometry. Additional air samples were collected from 4 m above the bog to provide localized background carbon-14 of atmospheric carbon dioxide and methane. When possible, isotopic end-members were determined using the Keeling plot method, which is a method of extracting information on the isotopic composition of ecosystem fluxes—otherwise isotopic mixing models were used.

Measurements were coordinated with external collaborators who measured flux rates of carbon dioxide and methane from these chambers, carbon-14 analysis of bulk peat from SPRUCE, and peat pore-water samples for concentration and isotopic analysis of dissolved organic carbon and dissolved carbon dioxide and methane.8 Our project supported additional carbon-14 analysis of dissolved organic carbon in pore water sampled at the same time as our gas sampling during 2015. These coordinated measurements have improved the quality of data and interpretations for the SPRUCE project as a whole.9

During the 2014 growing season, microbes at SPRUCE utilized young carbon sources for carbon dioxide and methane production (Figure 1), consistent with other findings that dissolved organic carbon and carbon dioxide in pore water were relatively young throughout the peat profile.9 These results suggested that downward transport of recent photosynthates fuels microbial activity in deeper peat at SPRUCE—that is, microbes are not utilizing old-peat carbon. On average, methane was 5 to 10 years older than carbon dioxide, indicative of the time-lag associated with transport of carbon sources to methanogens and transport of methane from the zone of production to the peat surface. Carbon-13 and carbon-dioxide values were similar to fresh photosynthates, and carbon-13 and methane values indicated that methane at SPRUCE was produced by a combination of acetoclastic and hydro-genotrophic methanogenesis (which use acetate and carbon dioxide as carbon sources, respectively). 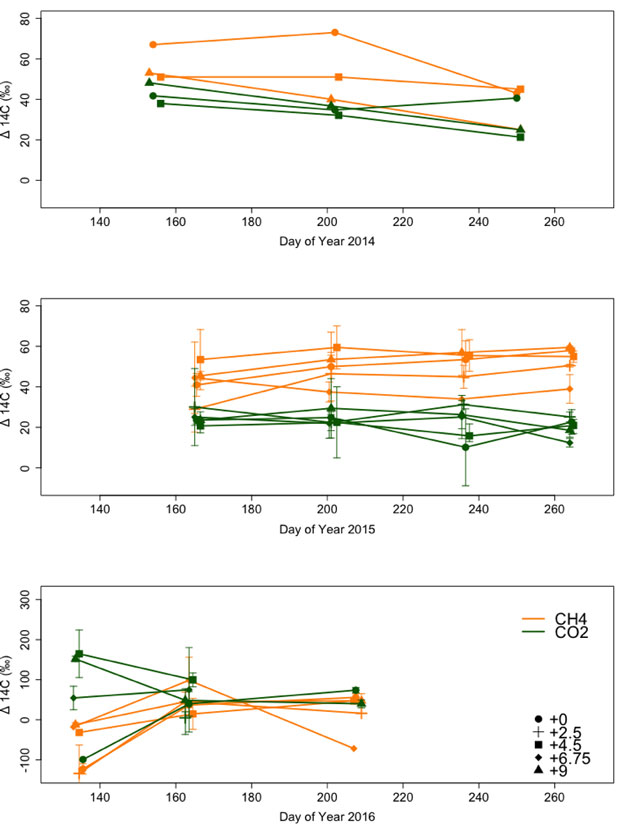 Figure 1. Carbon-14 isotopic end member for emitted methane (orange) and carbon dioxide (green) in 2014 (top), 2015 (middle), and 2016 (bottom). Symbols indicate warming treatments. Deep peat heating began on day 160 in 2014. Whole ecosystem warming began on day 225 in 2015. For reference, the change in atmospheric carbon-14 values were approximately 10 to 30 per milliliter during this time period.

During the growing seasons of 2014 and 2015, warming did not alter carbon-13 or carbon-14 of emitted carbon dioxide or methane (see Figure 1), despite an increase in methane emissions with warming.10,11 Therefore, warming treatments increased methane emissions, but did not alter the source of carbon being used for carbon dioxide of methane production: microbes utilized young dissolved organic carbon even after short-term warming treatments.

Similarly, in 2016, warming did not effect emitted carbon-14 values, except in spring, specifically, during day 134 in early May (Figure 1), when warming increased carbon-14 of emitted methane (p = 0.01). This increase in carbon-14 and methane likely reflects increased microbial utilization of new photosynthates in warmed plots where vegetation was already active rather than increased decomposition of old, deep, peat-derived carbon. This effect was not sustained into the summer.

We identified microbial species performing key biogeochemical functions at SPRUCE using stable isotope probing and nanoscale imaging (Figure 2).11 Gene sequencing data from external SPRUCE collaborators were used for microarray construction.9 We conducted laboratory incubations of peat collected from SPRUCE plots in 2015. Anaerobic incubations to identify methanogens were performed with carbon-13-enriched acetate or carbon dioxide, but isotopic enrichment was not sufficient for further analysis. Aerobic incubations to identify methanotrophs were performed with carbon-13-enriched methane and nitrogen-15-enriched nitrogen gas. The same archeal species may have genes for methanotrophy and for diazotrophy, but it has been unclear whether the same species perform both functions in the field and if this changes with environmental conditions. 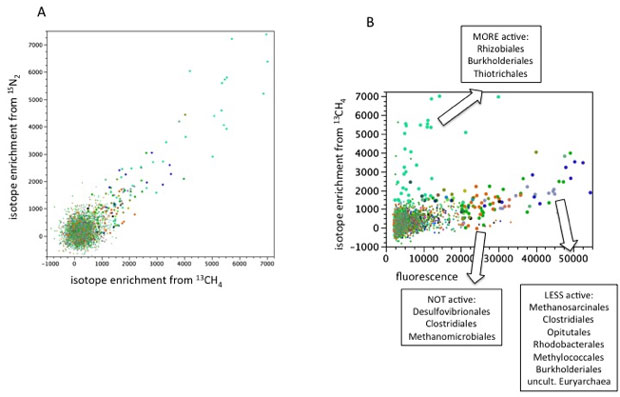 The aerobic dual-label incubations yielded enriched ribonucleic acid, a nucleic acid present in all living cells, in carbon-13 and in nitrogen-15 (Figure 3). We found that the most active organisms were enriched in both isotopes, indicating that they fix nitrogen gas and oxidize methane (Figure 2), while some organisms became preferentially enriched in one over the other, indicating that they primarily performed nitrogen-gas fixation or methane oxidation (Figure 4).

Figure 4. Network diagram showing which microbial taxa (colored by family) incorporated carbon from methane (CH4) and nitrogen from nitrogen gas (N2) fixation. Organisms linked to the substrates were significantly enriched according to analyses of stable isotope probing with nanoscale imaging (thickness of the lines is quantitatively related to isotope enrichment).

We collected pore water from various depths from three SPRUCE plots (ambient, +4.5°C, and +9°C). Samples were analyzed for helium-3, and hydrogen and oxygen noble gases. We found very small amounts of free gases, indicating little potential for bubbling, and high amounts of dissolved gases, suggesting that diffusional transport of methane and carbon dioxide is likely the dominant mechanism for translocation of gases to the peat surface and emission to the atmosphere. Stable isotopes indicated that the bog receives the majority of its recharge in the spring and summer months. Tritium data show relatively young water at shallow depths with characteristic decay profiles to 1-m depth (Figure 5). Below 1 m, pore water remains young (<5 years old), indicating high lateral mixing. We confirmed with recharge testing that shallow wells recharged rapidly, while wells greater than 1-m depth recharged very slowly. This supports previous hypotheses that subsurface lateral transport of water, dissolved organic carbon, and dissolved nitrogen is an important factor at the bog. No changes with warming treatments were observed for subsurface hydrology or pore-water chemistry during this project.

This project directly supported the Laboratory's core competency in nuclear, chemical, and isotopic science and technology by promoting the continued development and early application of specialized techniques in accelerator mass spectrometry and isotope-ratio mass spectrometry.

As a result of this work, we determined that microbial communities at SPRUCE use recent photosynthates as a carbon source, even after short-term warming. A delayed response to warming might result in a shift towards increased use of old-peat carbon. Future measurements of carbon-14 of emitted carbon are the only direct test of this hypothesis. There are currently no plans or funding to continue or repeat these measurements. With this project, we conducted the first dual-label experiment using stable isotope probing with nanoscale imaging on methanotrophs and diazotrophs. The results showed that some microbes at SPRUCE oxidize methane and fix nitrogen gas as well, while some appear to preferentially perform one function or the other. In addition, we discovered that subsurface transport of water (and the carbon and nutrients dissolved in it) is relatively rapid at SPRUCE in the top meter of peat where most microbial activity occurs. This finding is valuable for understanding (and modeling) the interaction of biogeochemistry and hydrology at the bog. This work highlighted for the DOE community the value that LLNL’s capabilities and expertise in water tracers can provide to large experiments like SPRUCE. Livermore involvement in the SPRUCE experiment will continue in the short-term through collaborations established and strengthened by this project, including a small contract with Oak Ridge National Laboratory, which is the lead laboratory for the SPRUCE experiment. In addition, LLNL team members were co-investigators on two “spin-off” proposals, led by university investigators also working at SPRUCE.